Why is there a difference between US election result data in different websites?

If I search US election result in Google it shows a box with apparently the number of electors a candidate has received, which looks like it is sourced from AP (eg: Biden/trump: 131/92 at current count).

However, the BBC's reporting shows a different number for each candidate (Eg: Biden/Trump: 89/72 at current count).

As far as I understand only few states have so far declared a formal outcome of their elections, and due to the huge number of votes that have been sent through mail this year, the formal final result may not even come out today.

So why are Google's (or AP's?) and BBC's reporting of current results so different? Moreover I think they are showing a number as their result that is too high. Is it really? Are they both just showing their predictions of who might get how many electors, based on the current formally acknowledged vote count? If that is the case, shouldn't the number of electors won go down sometimes as more votes are counted? I have only seen them go up. What is actually going on here?

No state has declared an official outcome of its election. The results you're seeing are statistical predictions taking into account the official but not final vote totals reported by some subset of each state's precincts. Notice how the vote totals are qualified with figures like "11% of the expected vote" or the like, meaning that only the indicated proportion of the vote has been counted.

The results differ because each organization offering these predictions uses its own statistical model, so some organizations will call a given state earlier than others.

The process of certifying the election result generally takes a few days, at least, and it involves counting mail-in ballots which, in some states, may be received after election day. In those states it's not possible to certify the result until the designated time period for receiving mail-in ballots has ended.

Another factor is the possibility of a recount. In some states, this happens automatically if the margin of victory is sufficiently narrow. In other cases the recount may be demanded by the losing candidate. The election result cannot be certified before the preliminary results has been announced and the recount process has been allowed to play out.

Are they both just showing their predictions of who might get how many electors, based on the current formally acknowledged vote count?

Not quite. They're showing predictions of who they think will actually win, and they only "call" a state once they believe they are certain that they're right. That's why the electoral vote counts tend to increase only. Mistakes have been made in the past, of course, and in those cases the running counts did go down.

Here is CNN's current projection shown to me, an Australian, @ 2:20pm ACDT:

As contrast, this is ABC Australia's result at the same time: 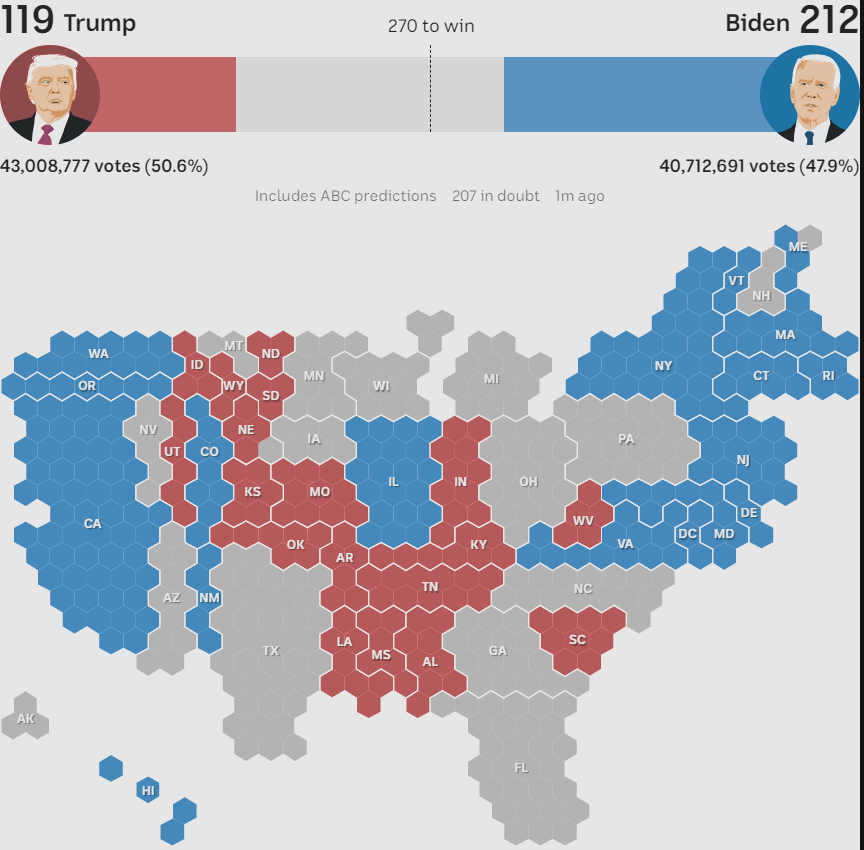 We are giving away all states where the average poll lead is greater than 10 per cent. None of these states are in play at this election.

The US networks will not do this because they do not give away a state until the polls close. This is to avoid early calls of results depressing turnout in western states where voting is still underway.

In the USA, all elections are held on the same day. Calling the Presidential race before California closes at 3pm Sydney time impacts state and local elections.

Broadcasting in Australia, we have no restrictions on giving away states where the result is clear and voting is still underway. We consider this helps Australian audiences understand the maths of the Electoral College.

In addition to the points phoog raises in their answer, there is also the fact that different sites use different methods to collect the raw vote totals as well.

Some sites will use data made available by the different states' department of elections (or similar) on a website. Other sites will use a much older method; they will literally have someone at each county office (yes, tens of thousands of them!) and report when the county office reports their vote totals. (I don't know how COVID impacts this; this is how it used to be, in any event, as little as four years ago.) Others have other methods, or some hybrid of these methods, to update their totals.

As a result, each major site could have a different total - and not only will some sites be more up to date than others, but some sites will have different values than the other, leading to it looking like one candidate is more or less ahead depending on which news site one views.

14
How can the US electoral college vote be so different to the popular vote?
71
Is there a difference between how Cambridge Analytica and the Obama Campaign got Facebook users' data?
3
Can electors in US make complex "vows"?
6
What are the actual mechanics of counting rank-choice (instant-runoff) votes?
15
What if there is no Presidential winner on Jan 20?
9
How can election winners of states be confirmed, although the remaining uncounted votes are more than the difference in votes?
80
Why is vote counting made so laborious in the US?
19
How exactly was the Texas v. Pennsylvania lawsuit supposed to reverse the 2020 presidential election?