Does my vote even matter? [duplicate]

Ask Question
Asked 5 months ago
Active 5 months ago
Viewed 202 times
9
This question already has answers here:
Does voting really matter as a Democrat living in a solidly Republican state? (9 answers)
Closed 5 months ago.

If I'm voting republican in a state such as California, does it even matter?

The probability that your vote will affect the outcome is only one way of looking at the situation. There are a number of other reasons why you should go out and vote, even if you live in a safe seat/state.

You can find arguments for voting in safe seats all over the place. Why am I being asked to vote

Arguments on Voting counts are based on UK numbers, but the same follows in most places.

In 2017 there were 14.5m non voters, that’s more potential votes than any one party received. If all of these people went to the polling station, then the outcome could be very different – even in constituencies seen as ‘safe’.

In 2016 in California if everyone who didn't vote had turned up and voted Trump, then Trump would have won. Actually it's worse than that. If all those votes had turned out and voted for me, then I would have won. Which would lead to some tricky eligibility questions...

There's an LSE blog post with 5 reasons. Again the details are UK, but the principles apply across the world. I've just cribbed the headers, follow the link to the full piece.

1: The seat might not be as safe as you think
2: To influence your MP’s behaviour
3: To make future elections more (or less) competitive
4: To influence national vote share
5: To help keep democracy alive

This paper analyzed the probability that your vote would affect the presidential election outcome based on information available before the 2008 election. Obviously, the electoral landscape changes from year to year, but California has been fairly blue for a while now, so perhaps this can give us an idea of what these probabilities might be like.

Figure 3 gives a nice exposition of the probabilities. 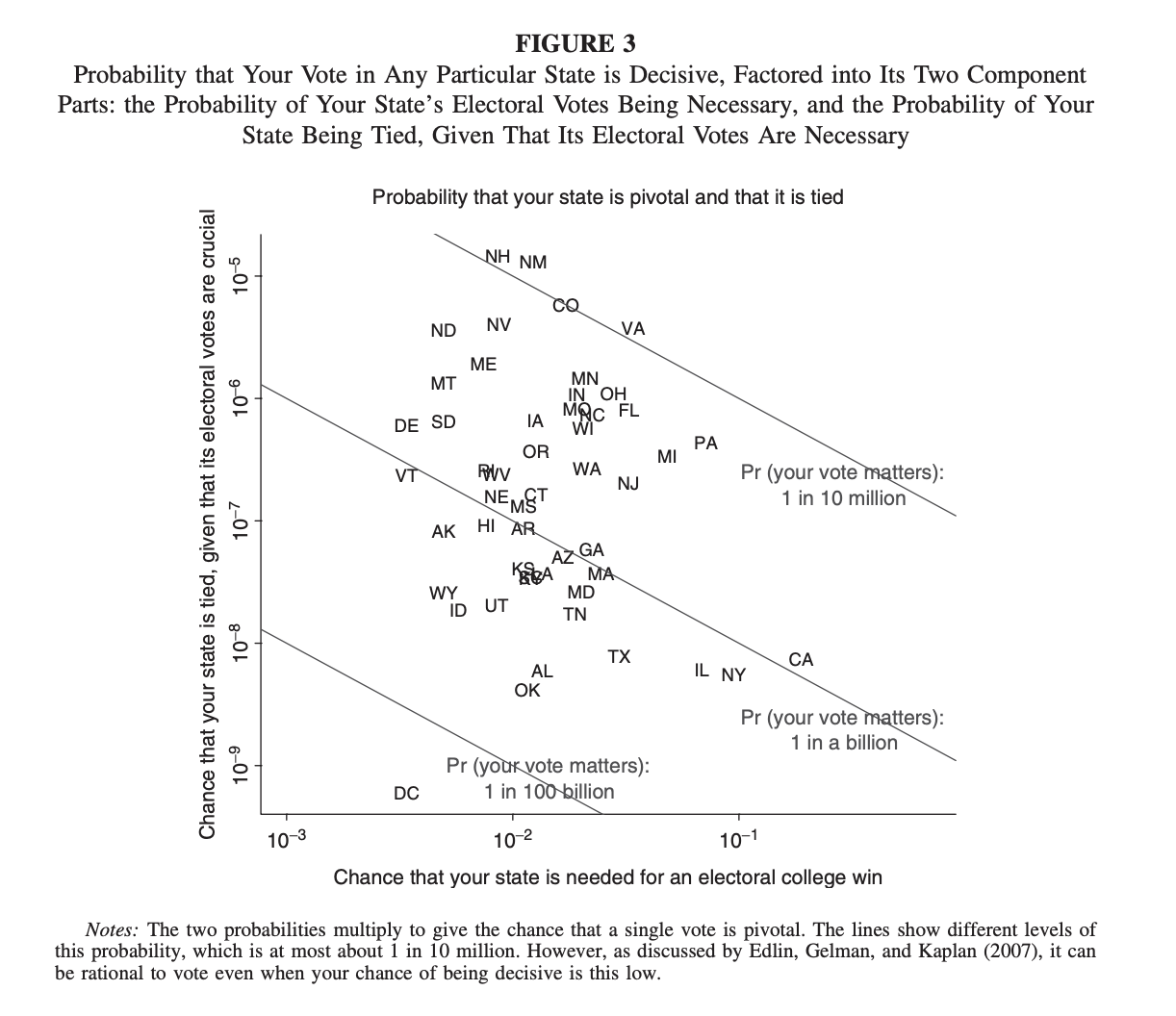 This is also to say nothing of your vote's potential to affect other federal, state and local elections.

21
Does voting really matter as a Democrat living in a solidly Republican state?
67
Why am I being asked to vote?

22
What makes California a Democratic state?
14
Is there any reason to vote against the predominant majority?
8
Why are California Republicans against the National Popular Vote Interstate Compact?
5
Who decide the order of the states of primary vote?
11
Does it matter if I vote for an unopposed candidate in a primary?
4
What are the rules for reporting vote counts on election night by the news media?
7
Why are people asked for their party affiliation when registering to vote in the United States?
22
Why don't Democrat or Republican partisans register and vote in swing states?
1
Does this image represent interstate migration?