I am curious about the correlation between Senate and President. I have found that Susan Collins winning by a relatively large margin appears to be an outlier.

The senate races seem closer to the president in 2016, which is my hypothesis. Based on preliminary data, excluding Georgia's regular, what is the correlation between two party Dem vote share for President and Senate in each state? And was my hypothesis correct? (The correlation was about 91%.)

I also feel the US is a quasi parliamentary democracy right now in the sense that people vote for and based on parties and not so much based on the individual candidates. That is a topic for a different question but I put this in for context.

Looking at the results so far, as one might expect, there is a clear correlation between the vote in Senate races and the Presidential election. In the figure below, I've excluded Georgia's special election and Arkansas' election in which the Democrats did not field a candidate. In Louisiana's blanket primary, I've summed the votes of candidates representing the Democratic & Republican parties.

The correlation coefficient of the two variables is ~0.95, indicating a strong positive correlation, and the trend line shown on the graph has a gradient of ~0.88.

Looking at outliers, the only result with a studentized residual greater than three is the Nebraska result, where Democrat candidate Chris Janicek won ~27.8% of the two-party vote for the Senate, while Joe Biden won ~40.1% of the two-party presidential vote. The studentized residual of Susan Collins' result in Maine was around 2.78, so although close to being categorized as an outlier, it does not fit the definition in this case. 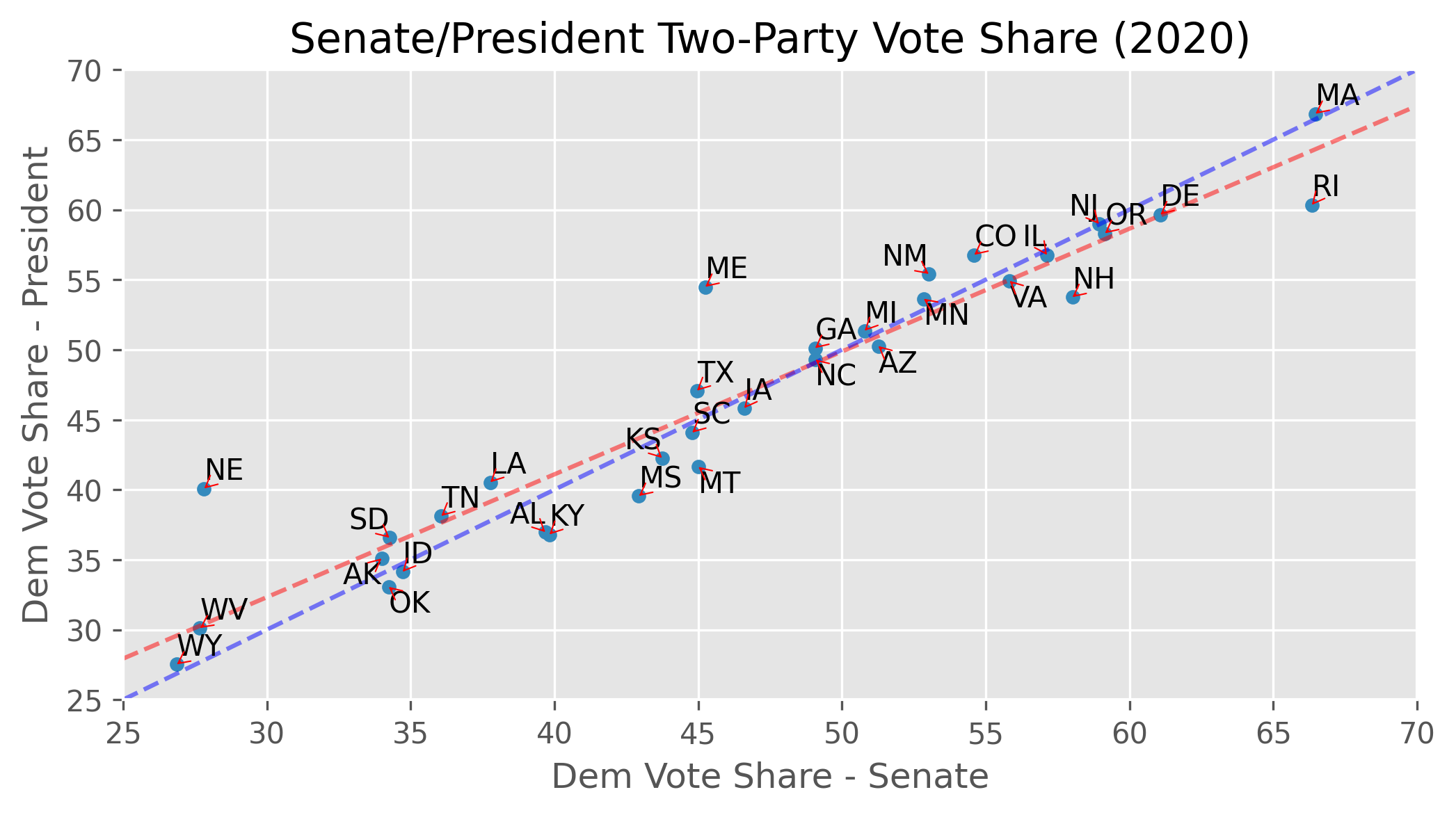 The figures above are based on preliminary data recorded at 10:20 GMT 9th Nov. as reported by Dave Leip's Election Atlas.

Not the answer you're looking for? Browse other questions tagged united-states presidential-election senate .

7
Why "must" Roy Moore step aside if abuse allegations are true?
3
Is there a correlation between high rents and high levels of *legal* immigrants?
16
In 2016, why did the GOP win the House popular vote while Clinton won the popular vote?
26
30+ years ago, why was there often a huge split between the presidential and house elections but not anymore?
2
Is there a correlation between a President's approval rating on Election day and their popular vote margin during re-election?
2
Does it make a difference that senate republicans choose not to vote?
10
Can the Acting President break ties in the Senate?
47
Who "spent four years refusing to accept the validity of the [2016] election"?
25
Why would the Lincoln Project campaign *against* Sen. Susan Collins?