Why don't Democrat or Republican partisans register and vote in swing states?

Since swing states are often the deciding factor in US presidential elections, why don't Democrat or Republican partisans register and vote in swing states? Or perhaps they are already doing so and it's already part of the US election traditions?

Looking at https://www.ncsl.org/research/elections-and-campaigns/voter-id.aspx#Details (mirror), it seems one can simply use one's passport when voting, and looking at one example of vote registration form (I took New Jersey as an example), one is supposed to have only stay in the state 30 days (mirror) before the registration and I'm not even sure whether it is really checked since it seems SSN is enough to register (mirror). Staying somewhere a few weeks (or perhaps less) in a swing state to vote there sounds like something some Democrat or Republican partisans could do. Or did I miss something?

Simply put, because it is a crime. It is not allowed (e.g. in Minnesota) to move somewhere for a month to vote there. Plus, most people can't afford such a disruption to their life.

When I registered to vote in Minnesota, I got a letter from my old state asking to confirm I'm no longer resident there (and reminded me if I had indeed moved, it was illegal to vote in my old state). So states do talk to each other, and would probably notice if I re-registered multiple times within a few months.

Finally, if you do move just to vote, that means you don't get to vote locally. In many cases, giving up your right to vote in the actual town/county/district you actually live in is not worth faking living somewhere for a month to commit a crime.

There was a website put up after the 2016 election that helped you find the closest swing district to you, so you could maybe move and flip a House rep, but I can't find that tool any more.

The stakes have to be higher than just a presidential election. This DID happen in U.S., prior to the Civil War, in Bleeding Kansas (from Wikipedia):

Missouri, a slave state since 1821, was populated by many settlers with Southern sympathies and pro-slavery views, some of whom tried to influence the decision by entering Kansas and claiming to be residents. The conflict was fought politically as well as between civilians, where it eventually degenerated into brutal gang violence and paramilitary guerrilla warfare. The term "Bleeding Kansas" was popularized by Horace Greeley's New York Tribune

but Nebraska and Kansas were swing stages for control of the balance of slave states and free states in congress.

Around $11 billion was spent on presidential campaigns. While that sounds like a lot, that works out to less than $100 per voters. It would cost most people more than $100 to move to a battleground state. Their money would be more efficiently spent by giving it to the candidate of their choice, or to a political action committee (PAC) supporting them.

In the 1980s the Rajneeshee cult attempted this on a much smaller scale in Wasco County, Oregon. That's the classic cultists in orange robes while their aloof leadership drives around in Rolls-Royces. They weren't partisan in your sense, but they illustrate how it can be done, and how it can be stopped. 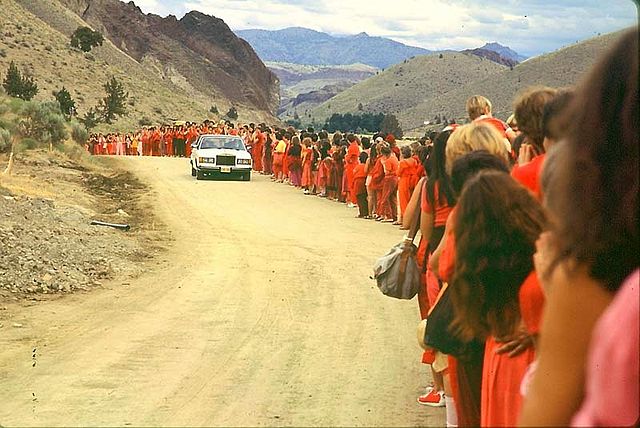 Rajneesh and thousands of his followers moved to Wasco County with a population of just 22,000. They incorporated themselves into the city of Rajneeshpuram, zip code 97741. Further expansion of Rajneeshpuram was mired in legal conflict with claims that it was essentially property of a religious organization and its incorporation violated separation of church and state, as well as investigations into immigration violations.

They looked to the nearby tiny town of Antelope, Oregon (population then about 50). The cultists purchased lots in Antelope, registered to vote, and took over the town government by overwhelming the small number of local residents. Now they had a more legitimate town government to work with and renamed the town Rajneesh.

Facing further local and state backlash, they turned to influencing the November 1984 Wasco County election. Their plan was to control the county by getting their members elected to a majority of the County commissioners as well as the sheriff. They attempted to get candidates on the ballot, but failed to get sufficient valid signatures.

Wasco County was too large to take over directly as with Antelope. Many of the commune's members were not US citizens. Oregon only required 20-days of residency before being allowed to vote. The commune attempted to boost their voter registration with a "Share-a-Home" program; they brought in thousands of houseless people to live in Rajneeshpuram and tried to get them to register them to vote. Many refused and left, citing an atmosphere of brain-washing and feeling they had been tricked. A month before the election County Clerk Sue Proffitt, citing evidence of fraud, halted new registrations. Oregon Secretary of State Norma Paulus required new voter registrations to have a hearing in the county seat. At the cut-off date for registration, the Rajneeshees halted their imports of houseless people.

At the first hearing just 14 voters of about 200 were registered. At the second hearing they didn't show up. They Rajneeshees decided to boycott the election. The effort had failed.

Instead, the Rajneeshpuram tested their backup plan: make enough voters sick so they won't show up to vote. They cultured Salmonella and made "test runs" poisoning two county commissioners, spreading it throughout grocery stores, court houses, and salad bars sickening and hospitalizing hundreds of people. Fortunately there were no fatalities. This only boosted voter participation to keep the cultists out.

The Rajneesh leadership fled to Europe. They were extradited from West Germany and sentence to 20-years, but were released after 3 and moved to Switzerland. The mayor of Rajneeshpuram turned state's evidence. The Rajneesh himself outed their crimes claiming he was unaware at the time; he was arrested on immigration crimes and deported. He died in 1990 in India.

This was the first and largest bioterror attack in the US.

Going back to the question, it illustrates some of the powers county clerks and secretaries of state have to combat overt voter fraud via registration.

There have absolutely been attempts to do that. See for example the Free State Project: https://www.fsp.org/

However, it appears that most people do not value political outcomes enough to upend their lives around them.

1
What prevents DC residents from registering and voting elsewhere?

22
What makes California a Democratic state?
13
Are there advantages to my being registered as an independent in the US?
11
What has divided the country so severely since Bill Clinton's election?
22
Voter registration fraud: how is citizenship checked?
10
Being “registered” as Democratic/Republican/Independent vs being a party member
9
How does the discrepancy between exit polls and results in recent US elections compare to pre-electronic machine margins?
12
Are Democrat-led states handling COVID-19 better than Republican-led states?
2
Would an online voting system using a secure id be more subject to coercion than the current mail in ballot system?
0
Why do US independent voters seem at least as likely to vote Republican compared to all voters since 2008?