Will the demographic inversion between Democrats and Republican reverse post-Trump? [closed]

Ask Question
Asked 7 months ago
Active 7 months ago
Viewed 108 times
4
Closed. This question is off-topic. It is not currently accepting answers.

Party demographic inversions are not uncommon, i.e. when the demographics that make up a party or the ideology of the party invert. It was not long ago that southern states tended to vote Democrat while northern-eastern states tended to vote Republican. The way states generally vote in presidential elections had stayed the same since 2000, i.e. West-coast, Northeast, and northern Midwest blue. Scroll Through Elections Here (top right)

Are we overdue for a political inversion in the near-future?

The gains below were more intense in the presidential election of 2016 and 2020, and less intense for the non-presidential elections. Note that the source I sent only goes up to 2017. You can see noticeable upticks and downticks right at 2016. This fades a little in 2017. Recent 2020 results confirm the continuation of the trends below.

I know quite a few college-educated Republicans that voted Democrat because of some disagreements Donald Trump. They are likely to vote Republican in 2022. I don't see the Blue Collar collation that Donald Trump gathered voting Republican again. They liked Trump, not so much establishment Republicans. As for Hispanic voters, since they traditionally were more conservative in the past, before immigration issues, it is possible they will remain Republican. Especially if Republicans are soft of immigration issues. The Republican Party historically would get 4-8% of the African American vote. Recently Trump has been hitting 10-12%. I am unsure if this will shift back.

Question 1: Is it likely that the Republican and Democrat Party will revert back to their pre-Trump demographics, or will the demographic shift continue inverting?

Question 2: What has caused past political inversion?

Early Disclaimer: Feel free to suggest edits for this question. Happy to make corrections. For example, I would like to add more sources and bullet points above. Education and income can be a sensitive topic. We should not stereotype a group of people as uneducated or low-income for their political beliefs. Please be mindful that there are great minds on both sides, and politics really comes down to a difference in opinion now days. Republicans and Democrats agree on far more than they disagree on. 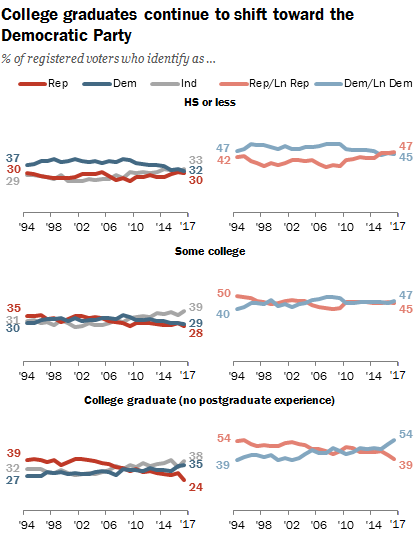 23
What caused the racial shift of America's parties?
5
Is Donald Trump the main reason behind the dramatic increase in Republican primary turnout?
0
Trump and Democrats “deals”
56
Why isn't Election Day a federal holiday in the US?
15
Why does the Democratic Party perform well in New England?