Why are there run-off elections in Georgia this year?

I was surprised to hear that run-off elections were to take place in Georgia.

Presumably this is part of a system of "proportional representation", whereby in circumstances where there are more than two candidates, a winner with more than 50% support has to be discovered.

There are various voting systems, used around the world, particularly in Europe to achieve this - multi-member constituencies, run-offs, single transferable votes etc. In Britain none are used - the "first-past-the-post" system is used universally in parliamentary and local government elections.

Does the fact that "run-offs" are being used in Georgia, mean that they are governed by the rules of the US Senate, or is this a rule peculiar to Georgia?

It is not related to proportional representation. Most states for every election use first-past-the-post (FPTP).

The Senate has no rules for how Senators are elected, except that it is done by popular vote. They were originally appointed by state legislatures. Senators, unlike Representatives, can be appointed when a vacancy arises (rules depend on state). But an election must be held eventually. In fact, that's why there are two (independent!) Senate elections in Georgia this year, because Senator Johnny Isakson resigned in 2019, and appointee Kelly Loeffler must now earn her seat.

In the specific case of Georgia, there will be two run-offs because no candidate reached a majority in either general election. A similar system is Louisiana (and according to that page, Mississippi and Texas special elections). In these elections, the run-off is held if and only if there is no majority in the first round, after the general election.

Finally, Washington and California use a "jungle primary" where the top two candidates of any party advance to the general. This system is different in that even if a candidate gets a majority in the primary, they still face off against #2 in the general. Additionally, these primaries occur before the general, around late summer.

Here is a nice map, from Wikipedia. FPTP in red, with the states discussed above highlighted. Maine (pink) uses instant-run off voting (IRV), but Susan Collins got a majority in 2020. 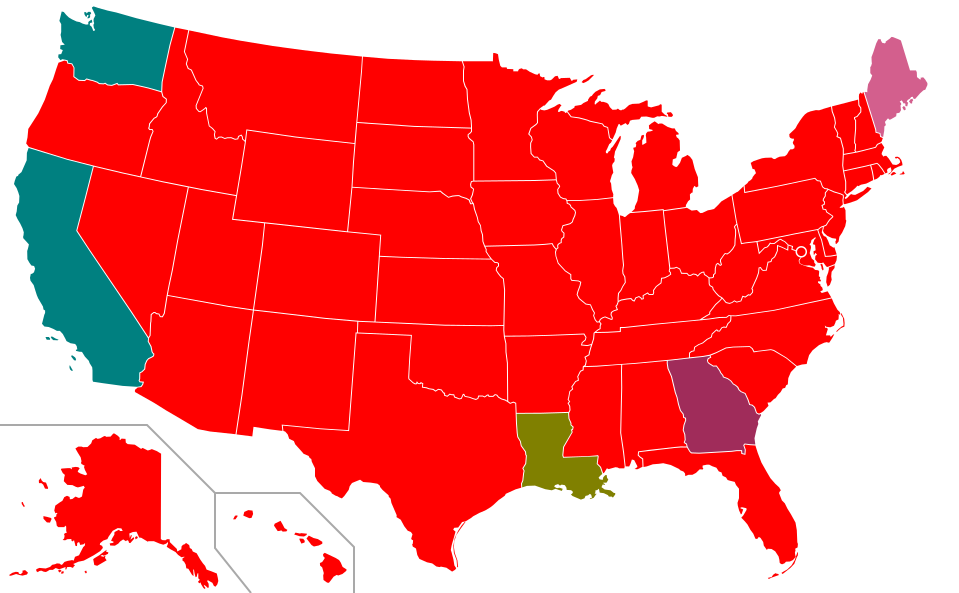 I would see run-offs as as a wrinkle on majority/plurality vote, not as anything like proportional representation.

Georgia, like Louisiana, California, France, and the City and County of Denver in single member candidate races and many other jurisdictions, has what is called a "two round system" in which a candidate wins a first round of an election only by getting a majority of the vote cast, and if no candidate gets a majority, a second round election is held between the top two finishers. Most U.S. jurisdictions, however, have "single member district plurality" voting systems, also called "first past the post" voting systems, in which the candidate with the most votes wins, even if that candidate doesn't receive a majority of the votes cast.

The purpose of a system like this is not precisely proportional representation. What it does is to eliminate "spoiler effect" caused when two or more candidates with similar views are both competing in a race with three or more candidates and split the vote, even though the similar candidates would be the second choice of the other.

It is "instant runoff voting" but without the instant part.

There are some good reasons by a two round system is more common than instant runoff voting.

Not the answer you're looking for? Browse other questions tagged united-states senate proportional-representation georgia .

3
Voting methods other than single-vote plurality in the USA?
4
Why does Georgia not have a hate crime statute?
1
Why are there only 36 US states with governor elections this November?
5
Would switching to a proportionate House require a constitutional amendment?
3
Can electors in US make complex "vows"?
10
Why is Georgia turning blue rapidly?
17
What is the reason for the date of the Georgia runoff elections for the US Senate?
8
Senatorial Class I, II, III races; Special Elections; & Georgia