Why has the state of Arizona taken so long to return results in the 2020 US Presidential Election?

Despite an early call by the Associated Press and Fox News, Arizona was generally considered one of the last uncertain states after the 2020 presidential election. In fact, still as of Sunday night, five days after the election, most other outlets (including ABC\CBS\NBC\CNN\NYTimes) have felt too uncomfortable to call it: 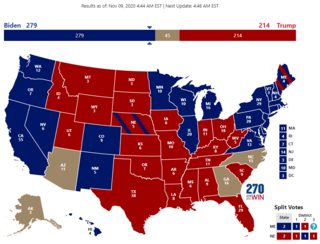 This list from a story by local television networks shows that there are still outstanding ballots in every county in the state. 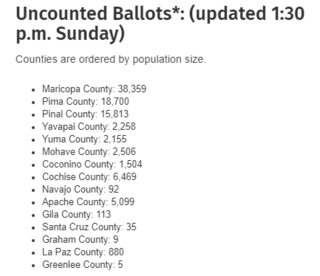 Perhaps the smaller counties come from the listed 7,553 needing further verification or the 44,668 provisional ballots, since the remaining count hasn't changed in those places in days. But 47,178 ballots are listed as "ready for tabulation", suggesting there's nothing particularly unique about the ballots left in the larger counties where results gradually have been changing.

Other states with slower results have pointed to issues with:

Wisconsin was a state among the later calls on election night, and had similar rules to Arizona... but this Milwaukee Journal story suggests all locations except one town of 300 people were completed seven hours after polls closed.
Florida, likewise a close state, likewise with similar rules to Arizona (and always highly regarded for election success!), had 99% of precincts reporting six to seven hours after polls closed according to this Orlando Sentinel story.
I haven't checked into every last no-contest state to see if any of others with helpful deadlines have had delays, but haven't come across any.

And this story suggests that counting of both early votes and mail-in ballots were indeed started two weeks before Election Day.

So what in the world has been the particular widespread delay across the state of Arizona?

First, let's note that Arizona has a history of long, slow vote counts.

Every election, it takes weeks for Arizona to count its ballots.

The late results are nothing new, though. In the 2018 general election, it took six days before Kyrsten Sinema emerged as the winner of a hard-fought U.S. Senate race. In 2010, voters waited 12 days to learn they had legalized medical marijuana.

In 2002, former Arizona Governor Janet Napolitano had to wait a full week to find out if she was going to be the Arizona governor. She won but narrowly.

Since then, the state has been in the forefront of challenges that it’s system is a “mess” because it can take a week or sometimes more to count the votes.

It can seem confusing unless a voter understands the process.

“I heard somebody say ‘it’s a mess in Arizona'," said Adam Kinsey, a partner in the political strategy firm of Saguaro Strategies. “It’s not a mess at all.”

As best as I can tell, there are three factors that play into Arizona's slowness: number of mail-in ballots, length of verification process, and timing of legal deadlines.

There are definitely a lot of these. The majority of Arizonans choose to vote by mail, and they have for some time.

It started when Arizona passed a no-excuse absentee voting law in 1991. This allowed anyone to request a mail-in ballot for an election without giving a reason. Mail-in voting was made even easier with the creation of the Permanent Early Voting List in 2007, so that voters didn't have to request mail-in ballots separately for each new election. In 2012, 61% of Arizona voters chose to vote early or by mail*, and the number has only increased since. (AZPM News) (I had trouble finding sources for earlier elections.)

This year the percentage is even higher; it seems to have gone up to roughly 88%, by my calculations.

And while it is true that Arizona begins counting its mail-in/early votes* up to two weeks before Election Day, many ballots do not arrive that early. Maricopa County alone received 175,000 ballots through its non-postal drop-off boxes on the day of the election. (Arizona Republic / azcentral.com). Granted, that's not a large proportion in the grand scheme of things, but it's nothing to sneeze at.

* Sadly, Arizona does not distinguish between "in-person early voting" and "mail-in voting" when reporting its statistics, but it seems heavily weighted towards mail-in; as of late October, Maricopa County reported ~80,000 in-person early votes out of ~1.2 million early votes processed by that point.

I'm a bit fuzzier on this point, but here's what I've dug up:

All the news articles I've read point to signature verification as the most important step in the ballot-approval process—and it's not a fast step. The election workers compare the voter's signature on the outside of the ballot envelope to the signatures they have on record for that voter. This can take "a minute or more...depending on what the signature looks like." (KOLD News 13) As far as I can tell, the signature comparisons are done entirely by humans; I did not find any reference to "signature-verification machines" such as those used in Nevada.

By comparison, Wisconsin apparently does not verify signatures directly at all, instead relying on other forms of verification. Florida does verify signatures, but apparently compares to a single on-file signature rather than multiple; I don't know how much difference that makes. On the other hand, Florida started counting its mail-in votes a week before Arizona did.

I also found an article from the 2018 midterms that mentioned a bottleneck in the Maricopa County computer system (AZ's most populous county):

Fontes added that another bottleneck in his office is the computer system. It dates from the 1980s and is designed for a less populated county that rarely voted by mail. So it can only process up to 75,000 ballots a day. Maricopa has about 350,000 ballots that have yet to be tallied.

Granted, this may have been corrected in the two years since this article came out, but I have my doubts. Of course that only explains Maricopa, not the other counties.

Honestly, I still don't feel like I have the best understanding of what's going on here, but this is the best I could come up with.

Maybe Arizona is slower—or perhaps, it doesn't invest in the necessary resources to become faster—simply because its laws don't force it to go any faster? Perhaps other states have simply set more aggressive deadlines for themselves?

In Arizona, Nov. 10th is the deadline for voters to "cure" mail-in ballots with a bad signature, though "the deadline may be November 12th in counties that are closed on Fridays." I found one news article explicitly stating that most or all of the uncounted votes on Nov. 9th (when the question was asked) fell into this category; they could not yet be counted, nor could they be discarded.

Contrast Florida and Wisconsin. Florida ballots had to be cured by Nov. 5th. Wisconsin, in practice, requires voters to fix their signatures by Election Day itself (as far as I can tell), since the state does not have any explicit ballot-curing provisions.

What I don't know

I haven't been able to find much data on the number of election workers per state, or the election department funding levels per state. I imagine if Wisconsin was sending out three times as many workers per ballot, then naturally the count would go faster.

3
Why did Google/AP call Arizona for Democrats when at 90% reporting Ds only have a 1.3% lead, still shrinking?
2
Why is Nevada so slow to count the vote?

3
How are voting results from local precincts tabulated and passed to the news media?
16
What fact-based arguments exist that mail-in voting would lead to significantly higher instances of US voter fraud?
3
Absentee Voting in Ohio - What does the "vote capturing machine" do?
9
In the event of a Presidential candidate's death after the printing of ballots, would the Electors of certain states be able to vote at all?
15
What if there is no Presidential winner on Jan 20?
11
Why has Alaska not been called with a 30% lead?
21
Have there been any riots due to the 2020 US presidential election results?
10
How long might Congress take to certify the 2020 Presidential election?