What happened to the Pennsylvania Presidential vote count at 9:14 on election night?

To be clear, I'm not alleging fraud here. I'm simply wondering whether anybody knows what happened. If you look at the ratios, Trump gained a 3.6% swing between lines 5968 and 5977. That works out to 249k votes for Biden "vanishing" between those lines and only 122k for Trump. Comparing line 5968 to 6003 when the vote count finally gets back up to that level again, Trump gets a 21.2% swing between those two similar lines, so if this vote subtraction benefited anybody, it benefited Trump.

So, anybody know the story?

Possibly this, or at least related to this human error at Edison (whose precinct-level data NYT aggregated in their own software):

On Twitter and Facebook, thousands of users shared a false claim that a CNN video from election night is evidence of the supposed vote-stealing operation in action.

In the video, vote totals for Pennsylvania displayed on screen by CNN can be seen going up for Biden by 19,958 as they go down for Trump by that same amount.

But the error was actually a simple mistake by a research firm that gathers results data for CNN and others; it wasn’t a change in the reporting by election officials. (It’s worth noting, though, that those vote tallies are unofficial tallies, not final, official results.) The mistake was corrected about an hour later.

Edison Research, which provides vote tabulation data to CNN and other networks, said that the moment of Trump dropping by 19,958 was caused by a brief reporting error on its end.

A CNN source also confirmed that the matter came down to vote totals in Armstrong County being briefly transposed in the feed provided to the network, but that the accurate figures were soon restored.

“It was simple human error,” Farbman told us by email, noting the mistake was corrected about an hour later.

The time-length of the anomaly in NYT data is about 31 minutes, which somewhat consistent to how long it took to fix this (other) data problem at Edison.

A number of media sources (including the New York Times) switched from the Associated Press to Edison Research for their exit poll data. I've searched around for Edison's data descriptions without much luck, but I suspect that 'votes' in this case is a projection: estimated votes based on some combination of exit polls and piecemeal returns from counties. Since the time period we're taking about is shortly after the polls closed, we can expect that each new chunk of data received would have a disproportionately large impact on projections (in the sense that if only 1% of the population has been surveyed, and a chunk of data the leans heavily towards (or against) Biden is added, that chunk will have an outsized influence on the next projection). These projection errors would naturally diminish as greater proportions of the population report in, but early on they might show some artificially large swings.

In other words, it isn't that the vote count dropped by 340,000, it's that someone's projection is magnified by current, momentary trends to make the assumed vote count look like it dropped. It's Bayesian logic: if you role three snake-eyes in a row on a pair of dice, then all of a sudden snake-eyes seem extremely likely (at 100% probability); roll as eight after that, the perceived probability of snake-eyes drops precipitously to 75%, and will ultimately decrease all the way to its 'natural' probability of 1 in 36. Early election results show the large statistical variability of polling. Later results (by the law of large numbers) pull back towards the actual vote share.

Looking at the following image of vote count over time provided by CDJB in comments (I'm assuming she downloaded that data and ran it through Excel or SPSS), I've revised my view: 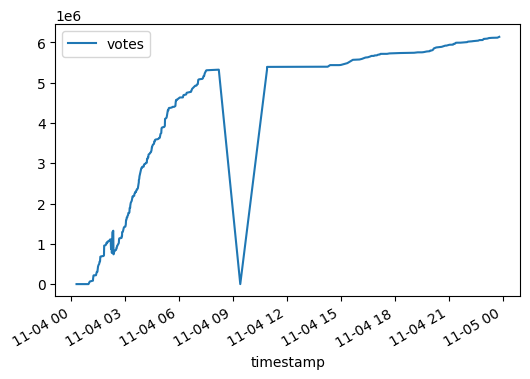 This steep 'V' is what I would expect from a glitch in a distributed network. Distributed networks hold data across multiple servers, with cross-checks to make sure that all servers are aware of changes in other servers. If one server goes down, large chunks of data become unverifiable by other servers; those other servers then mark that data as suspect, and hide it from totals until the absent server comes back on line. Nothing is gained or lost; distributed databases are designed that way to prevent data corruption.

At any rate, the volume of change speak to a computational issue, not a ballot count issue. Ballot counting is too slow to effect that level of change over that time-frame. Edison may step up and explains precisely what happened, but I think we can safely cast the into the 'glitch' category.

-9
Where can I find detailed information on the votes that were tallied in the 2020 election?

4
What are the rules for reporting vote counts on election night by the news media?
4
Historically how often has the losing candidate decided not to come out on election night to make a statement?
11
What made the popular vote in the US presidential election so close?
4
What are election poll watchers (challengers) permitted to do in Pennsylvania?
15
What if there is no Presidential winner on Jan 20?
79
Why is vote counting made so laborious in the US?
2
Why is Nevada so slow to count the vote?
19
How exactly was the Texas v. Pennsylvania lawsuit supposed to reverse the 2020 presidential election?
16
What events can occur in the electoral votes count that would overturn election results?