How many congressional districts produced a split result in the 2020 House and Presidential elections?

I was trying to find out more about districts who voted for one party for president and the other for House. We have data on this for 1972 to 2016. I am asking because I'm researching polarization.

According to preliminary results, Biden is ahead by 3.7 points nationally and Dems have narrowly held a House majority. Biden has been declared the winner as well.

How many districts split their tickets for president and House? And did this beat the low in 2012 or 2016?

This data takes a while to be collated, for reasons further explained in my answer to this related question. Nevertheless, definitive data which can be used to accurately calculate this based on precinct data, rather than approximations based on county data, are in the process of being collated by the Daily Kos' elections team as part of their 'Pres-by-CD' project. This work was completed for the 2020 election on Feb 19th 2021.

Using their data, combined with the New York Times' feed for the House elections results, I have created the below visualization using a congressional district hex-map available here.

According to Vital Statistics on Congress, this is the lowest level of district-splitting, both in percentage and absolute terms, since 1920. That year, 11 out of 344 districts produced a split result. In 2016 and 2012, 35 and 26 districts (respectively) split their tickets. 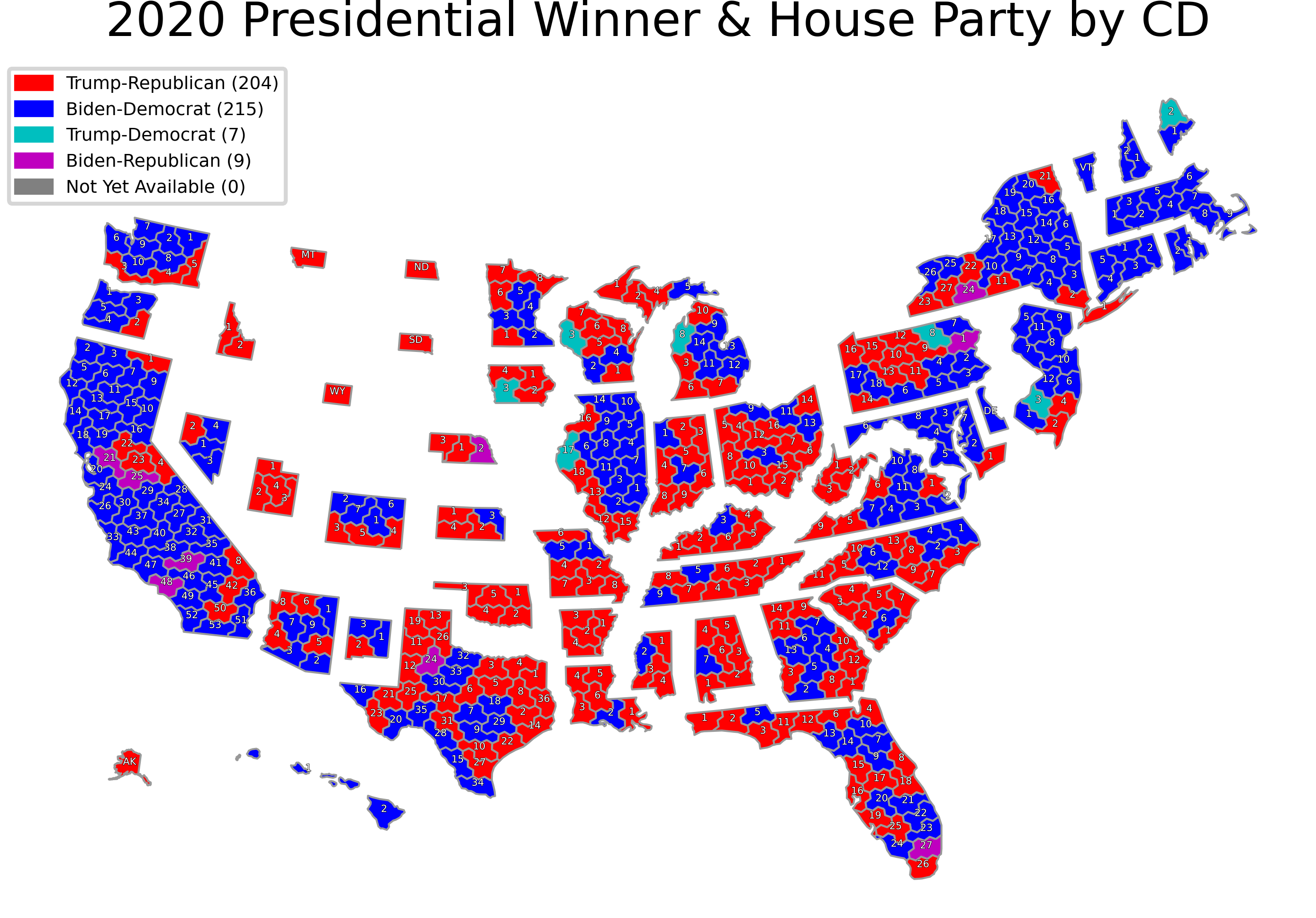 Not the answer you're looking for? Browse other questions tagged united-states presidential-election house-of-representatives statistics .

7
About how many Joe Biden voters are represented by Republicans in the House, and vice versa?
4
What is a possible theoretical relationship between social trust and political polarization?
3
Comparison of Presidential and House results by District

8
How many seats are physically on House floor?
26
30+ years ago, why was there often a huge split between the presidential and house elections but not anymore?
34
How can a single member of the House derail a Congressional bill?
1
In which congressional districts were there more votes for the Democratic candidate in 2018 than in 2016?
3
Is ticket splitting among nonwhite Democratic voters particularly uncommon?
3
Has a party ever picked up congressional seats in the general election and lost the presidential election in the USA?
1
What were the 2020 Presidential Results in TX-15 specifically?
3
Comparison of Presidential and House results by District
7
About how many Joe Biden voters are represented by Republicans in the House, and vice versa?