Where can I find detailed information on the votes that were tallied in the 2020 election?

I need a comprehensive dataset showing when individual votes were cast and for whom across the USA in the 2020 general election. I can find totals on the county websites and presidential candidate totals by county, but what I need at a minimum is a dataset that includes the timelines of all updates from each precinct during the vote-counting process. That is, what were the actual numbers of votes for each candidate reported by each precinct, and when were they reported? I think it is likely that many journalistic sites had access to this info but I have not found it publicly available anywhere. (It should be made public.) If possible I need a dataset that includes anonymized voter IDs and the complete ballot contents, (including rejected ballots and why they were rejected, e.g., whether a signature match succeeded or failed), and very importantly, their source (mail-in, drop-off, or voted in person). Timestamped data would be greatly preferred, including if possible, the marked time of receipt and the time each ballot was tabulated.

The icing on the cake would be to find historic voter counts and ballot details (and if possible, correlated IDs) for past elections for comparison.

Anyone know of a public dataset I can obtain that fits any substantial part of this description?

There's probably no such database freely available, although as you noted some media organizations have gathered the updates... and e.g. 538 has produced timeline graphs such as these based on those data sets. 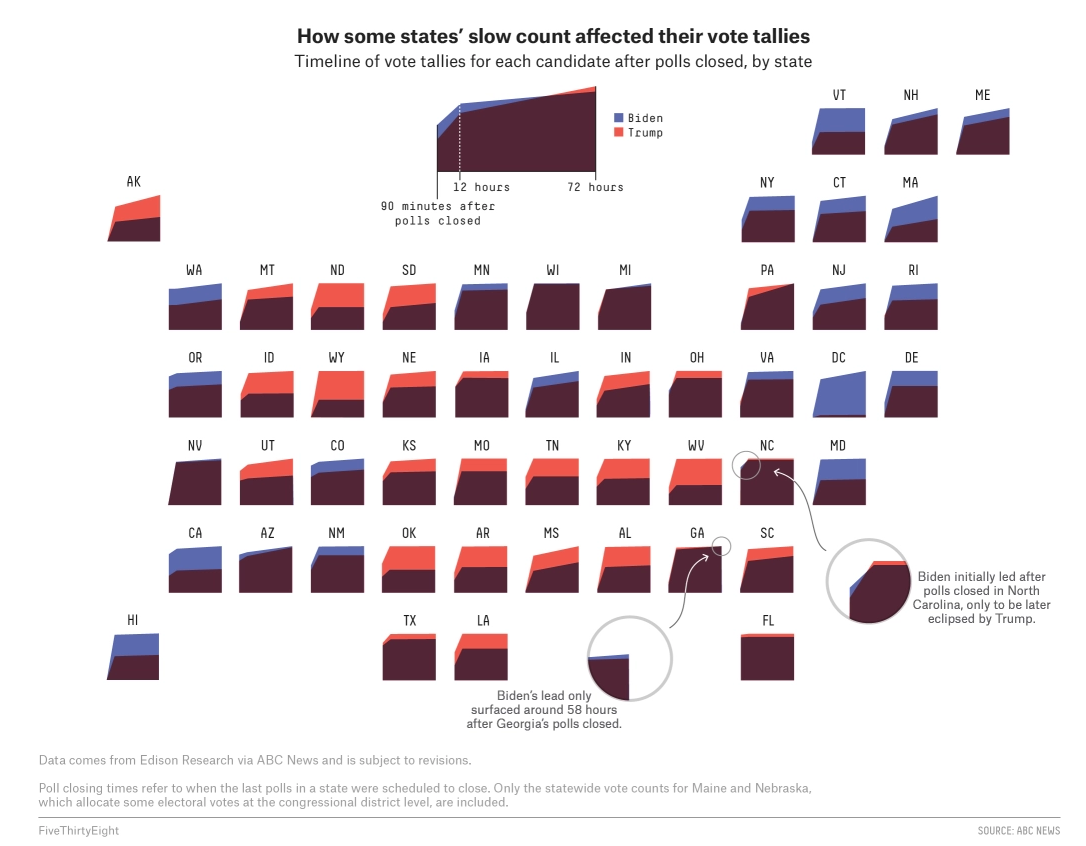 I don't know if e.g. ABC and/or Edison Research charge for access to such data. Your best bet is probably to contact them and inquire on the conditions under which they'd make the raw data available to you.

In principle, anyone interested and determined enough could have created such a data set since the updates themselves were public information; it's just that they were overwritten on the state/county boards' websites etc. every time there was new data. (I've checked a few such sites and they only have the final tallies now.)

A different q here actually provided the raw data that NYT pulled from Edison; it looks like the raw files are still available by state, e.g.

Beware however that you don't get absolute vote counts except for the total; for each candidate you only get a (three digit) approximation of their vote share:

(Amusingly, this three-digit approximation is apparently a good part of a conspiracy theory.)

Additional searching finds a github page that pulled all this NYT in into one giant results.json file for all the states!

In the opposite direction, the NYT state data is actually obtained by them by "concatenating" precinct data (the state json files reference these)... and these precinct-level json files are also still available, e.g.

They contain actual vote counts for candidates (not approximations), but these seem to be totals and don't seem to have any timestamps, e.g.

Further investigation indicates that there probably are separate files for each such update, named with the exact timestamp of the update, e.g.

But the catch is that the state file misses the final portion of the timestamp (the decimal points after the seconds) in the update list it contains, so I don't know how to get all the precinct-level update files.

Not the answer you're looking for? Browse other questions tagged election voting data-sources election-fraud ballot .

11
What happened to the Pennsylvania Presidential vote count at 9:14 on election night?

8
Database of all US federal, state and county elections and candidates
3
Where can I find how often my senator votes along party lines?
4
How can I find information about bills that politicians are trying to pass in Canada?
3
How are voting results from local precincts tabulated and passed to the news media?
4
What is the problem with Broward County Fl election results?
3
Absentee Voting in Ohio - What does the “vote capturing machine” do?
24
Are there proposals for preserving ballot secrecy when a candidate scores 100% in a very small polling station?
7
Has the Michigan risk-limiting election audit process completed for the 2020 election?