Are there other US presidential elections in which the majority of supporters of the losing side said the election was stolen from them?

About half of Republicans polled by Reuters/Ipsos said Trump “rightfully won” the election but had it stolen from him in systemic fraud favoring Biden, according to a survey conducted between Nov. 13 and 17. Just 29% of Republicans said Biden rightfully won. Other polls since the election have reported that an even higher proportion - up to 80% - of Republicans trust Trump’s baseless fraud narrative. [...] In Reuters interviews with 50 Trump voters, all said they believed the election was rigged or in some way illegitimate. Of those, 20 said they would consider accepting Biden as their president, but only in light of proof that the election was conducted fairly.

(The exact number in the Reuters/Ipsos poll was 52% of Republicans who said Trump "rightfully won"; the margin of error was 5%.)

A few other polls have shown an even higher number, depending how the question was phrased, e.g. WaPo cited a YouGov poll and headlined:

(I think that's referring to the question on p. 97. Even by "Party ID", the same poll found that 82% of Republicans said that "Biden did NOT legitimately win the election".)

A Rassmusen poll found that:

So, given that some other elections (after the [in]famous 1876 one) were also fairly controversial, namely in 2000 but also the one of 1960, was a [near] majority on the losing side claiming that the election was stolen or illegitimately won by the other side in the aftermath of such other controversial US presidential elections?

Just in the last few elections, there seem to be some decent examples:

After President Obama's victories in 2008 and 2012, Public Policy Polling carried out polls (2008, 2012) which included asking voters whether they believed that Obama had legitimately won the election, or whether the Association of Community Organizations for Reform Now (ACORN) stole it for him. This was referring to accusations made during the 2008 campaign that the organization perpetuated "massive voter fraud", and which linked Obama to the organization.

It's also fair to say that disputes of elections may be a much more modern convention. In Sept 2016 just under half of all Americans said voter fraud is a problem, with more of them being Trump supporters

The Post-ABC poll also finds a sizable gap in skepticism of vote counting accuracy between Clinton and Trump supporters. Just under half of Trump supporters (49 percent) say they are “not too” or “not at all” confident” votes will be counted accurately, while just 18 percent of Clinton supporters are similarly skeptical.

They're not alone, though. Many Sanders supporters feel the same way

The acrimony stems from a fiercely fought campaign and a sense among Sanders loyalists that party leaders privately favored Clinton. DNC leaders at the time scheduled fewer debates than Republicans and sometimes slated them for nights with low television viewership. Often opaque delegate allocation rules also contributed to a belief among some Sanders supporters that the primary was essentially rigged.

Contra to Machavity's answer, it seems the Bush-Gore legitimacy question was fairly polled at the time... although few such polls have web pages 20 years later.

Gallup's poll(s) on that matter have the "hand counts" as the most divisive issue:

[Q:] As you may know, the outcome of the presidential election in Florida is still in doubt. The absentee ballots from overseas have been tallied and a machine recount was finished earlier last week. Officials in three Florida counties, however, are still recounting by hand the votes cast in those counties and courts are still deciding if the recounts by hand should be included in the final vote total. In your opinion, should these vote recounts by hand be included in the final vote total in Florida, or not?

The answers to this question certainly, if nothing else, testify to the high level of attention being paid to the situation in Florida by the average American. Note the sharp division of opinion between Gore and Bush supporters. Gore supporters overwhelmingly endorse the inclusion of the hand counts, while Bush supporters break in the opposite direction, although by not quite as significant a margin. This question was asked near the beginning of Sunday's poll, and respondents were not reminded of who was requesting recounts. Yet Gore supporters quite evidently are aware of the Gore campaign's push for hand recounts, as are Bush supporters apparently aware of the Bush campaign's fight against them.

That poll also had machine-recount-accuracy question that was the near opposite of this in term of results:

Do you think a hand recount (or) machine recount is a more accurate way to count votes?

However, despite this [partisan] disagreement over the recounting methods, when asked whether they'd accept the legitimacy of the winner, there wasn't much difference between the candidates...

Over the course of the past week, the percentage of Americans who say they would accept Bush has risen slightly, while the percentage saying the same about Gore is slightly lower, perhaps due to the visibility given the unofficial vote counts showing Bush ahead in Florida (without the inclusion of hand counts now underway in three southeastern Florida counties). A look at these perceptions by support group shows that Gore supporters are now a little more likely to say that Bush could serve legitimately (72% now as opposed to 61% last weekend), while Bush supporters have dropped from 66% to 58% in terms of saying they would support Gore as legitimate.

Still, from the broader perspective, these movements are slight, and it is apparent that either candidate would have only a small group of partisans in the country not according him legitimacy in the presidential role.

So, in one aspect there was sharp polarization in 2000 (counting methods), but in another (legitimacy of the winner), there wasn't that much.

There's also a Pew poll on this matter [conducted twice, pre- and post-certification], but the summary lacks a breakdown by party (for most questions) and the full dataset requires some kind of login. Their summary for the legitimacy question suggests more division than in the Gallup polls (which were conducted earlier that month): 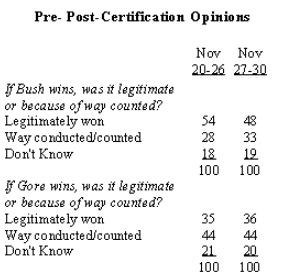 In late December Gallup published another poll that had another q on which the respondents split by party, namely whether the Supreme court had decided the case by merit or by their partisan desire of whom the president should be:

Do you think the Justices of the US Supreme Court who voted to end the recount in Florida did so -- [ROTATED: mostly based on the legal merits of the case (or) mostly based on their own desire to have Bush as the next president]?

Despite this, other (longitudinal) questions (mentioned in that poll) showed that confidence in the Supreme Court didn't decrease following this event.

Not the answer you're looking for? Browse other questions tagged united-states presidential-election public-opinion .

2
Are Democrats alleging that Russia tampered with the vote tallies?
0
Panel data on US presidents electoral legitimacy

18
Has a sitting US president ever expressed anything less than a full willingness to accept the results of an election?
2
Was Trump such an underdog 4 years ago according to polls?
3
What, if anything, has been done to account for mail-in votes in 2020 exit poll data?
21
Have there been any riots due to the 2020 US presidential election results?
8
How might Trump still win the electoral college?
7
Did Biden underperform the polls because some voters changed their minds after being polled?
7
Have Republican voters indicated that the party's behaviour after the 2020 election will change their voting intentions?