Have any other US presidents used that tiny table?

I think by now, everyone has seen the pictures of Trump sitting at a tiny table bearing the presidential seal: 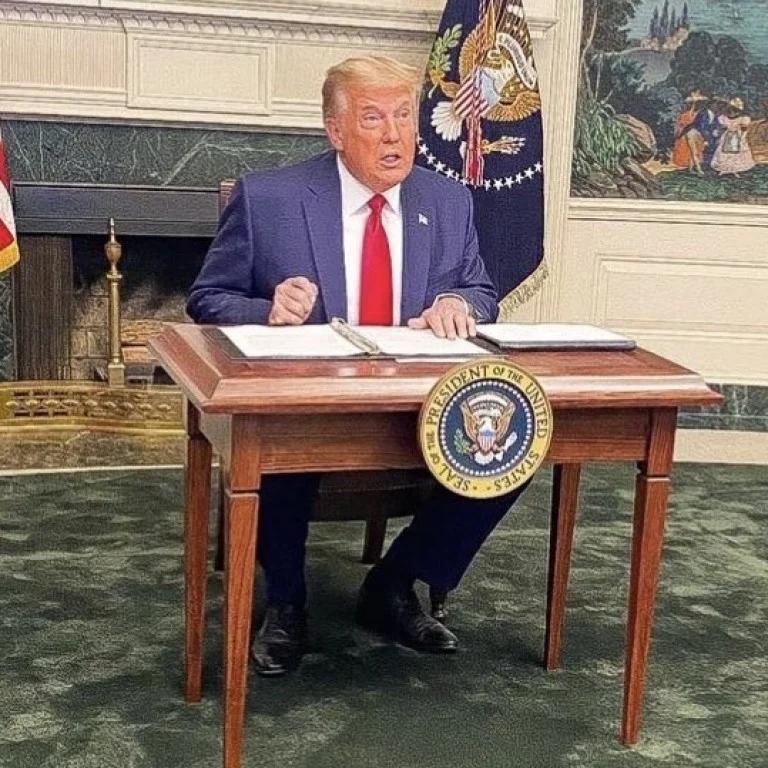 I am tempted to ask many things, like who thought that would be a good idea. But my actual question is, given that that table bears a presidential seal - has any other president ever used it?

That's known as a "signing table". Trump himself has used it before in 2017, and even joked about it himself. Or at least the audience laughed at his comments.

While the seal seems to be a more recent addition, there's a very similarly looking table being used by Reagan... well, to actually sign documents. 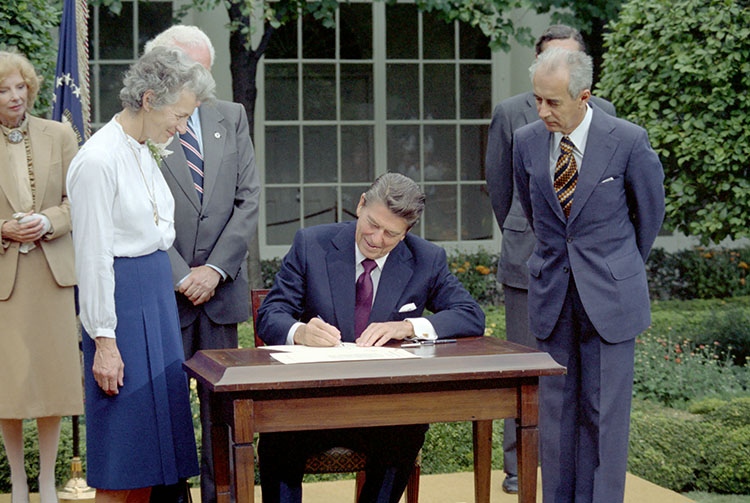 President Reagan, Tom Lantos, Annette Lantos and Nina Lagergren at the signing ceremony in the Jacqueline Kennedy Garden for S.J. Resolution 65 "The Wallenberg Resolution" proclaiming Raoul Wallenberg a Swedish national to be an honorary citizen of the United States. 10/05/1981. 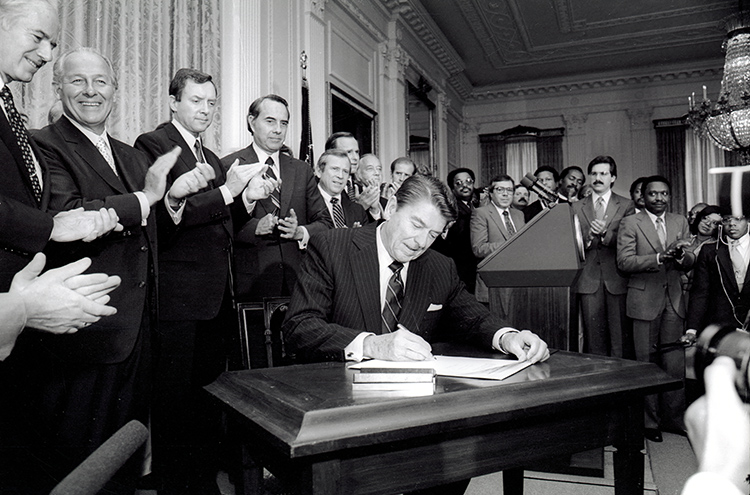 Reagan's "virtual library" index of signing ceremonies has more photos with Reagan using it for the same purpose.

One thing I've noticed in some (if not most) of the Reagan photos is that there's nearby lectern from which to give speeches afterwards. I guess the less usual thing in the Trump setups is giving speeches and/or press interviews from that table itself.

G. W. Bush can also be seen using the table to sign a NATO accession protocol for some Eastern European countries. In that photo, the table has gained the seal. 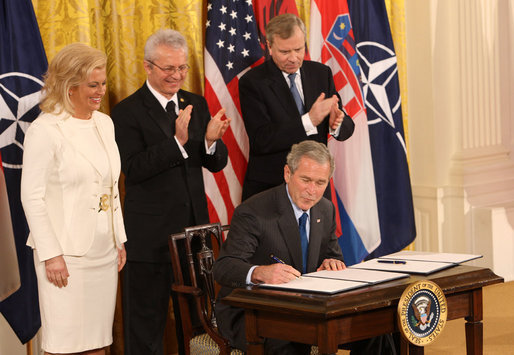 (Video of the ceremony also shows a nearby lectern.)

Interestingly, there are actually multiple copies of that table or at least very similarly looking ones at the White House, you can see two of them being used by Trump and Liu He, side-by-side. 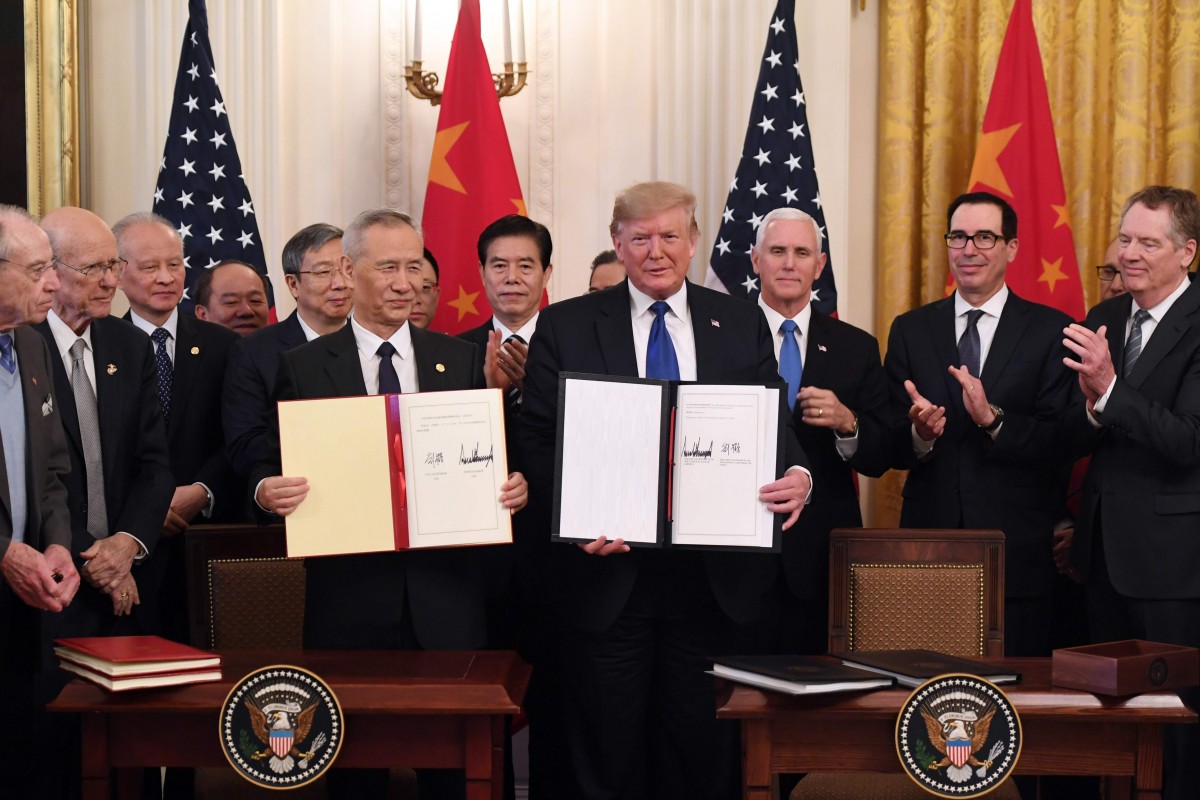 Bill Clinton and Obama also used them (in individual ceremonies, at least). 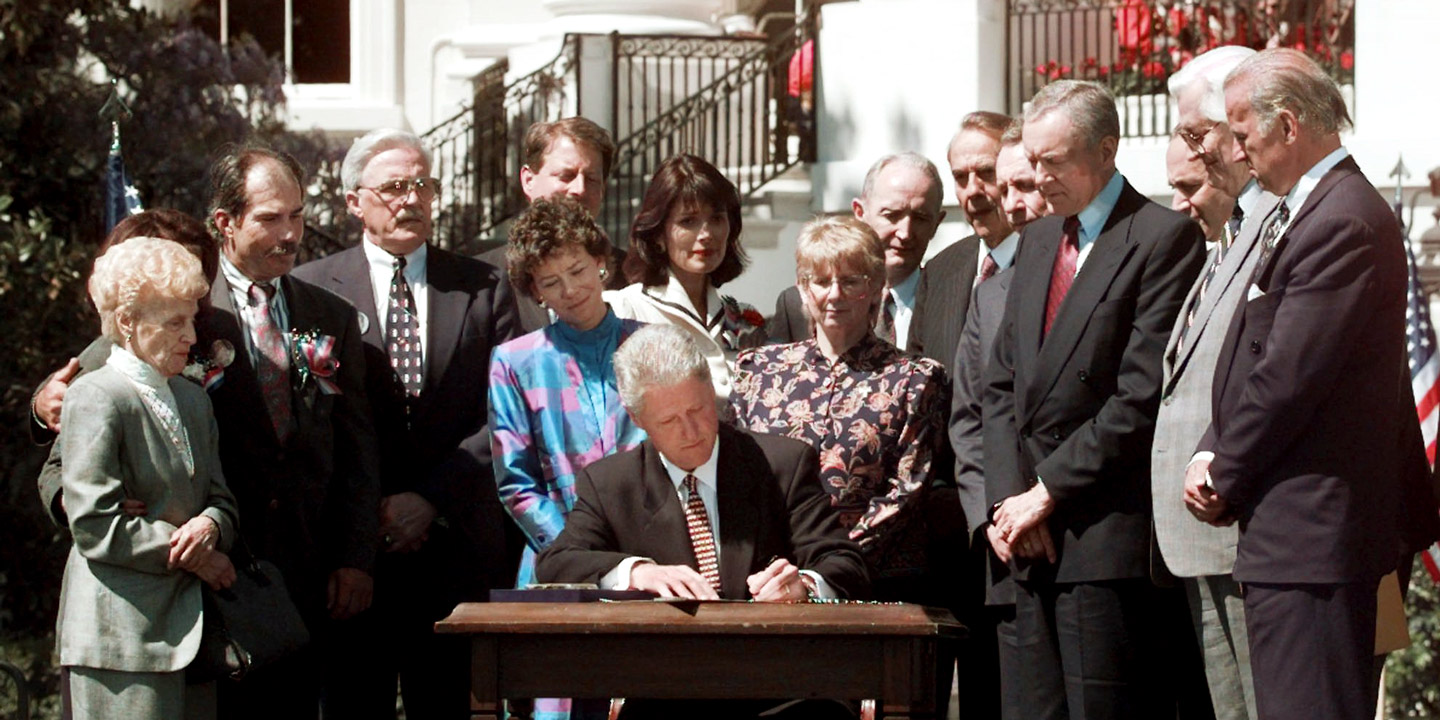 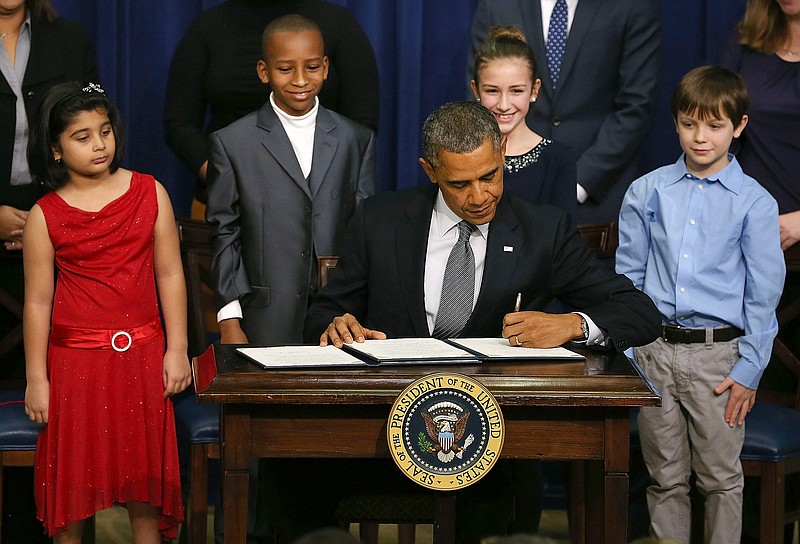 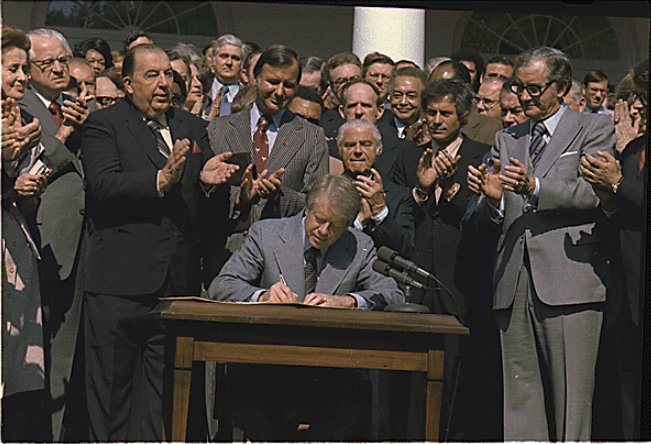 But I could not find evidence of Nixon or LBJ using that exact table (top) design, although they did use other tables of roughly the same size for signing ceremonies. (LBJ signing Economic Opportunity Act of 1964 and Nixon signing Older American Act Amendments of 1969.)

Hat tip to Darrel Hoffman for pointing out in a comment that Gerald Ford (who became president after Nixon resigned in 1974) did use the present design of the signing table. This is at a 1976 event. 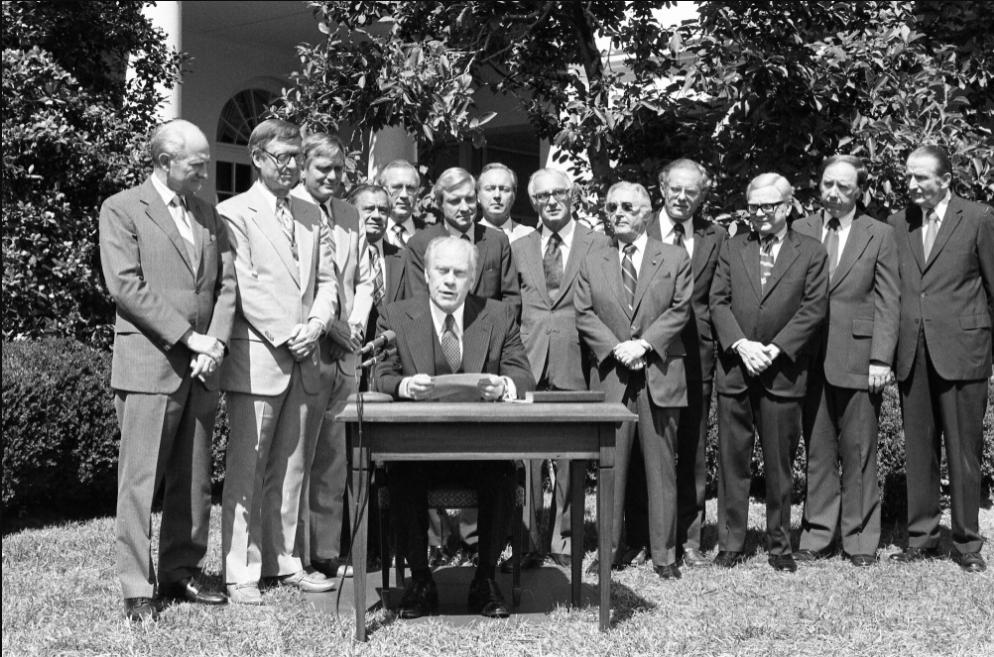 Earlier signing ceremonies of Ford, e.g. one from 1974 have him using a different design though.

Yes. Here is a photo of Barack Obama with the same table: 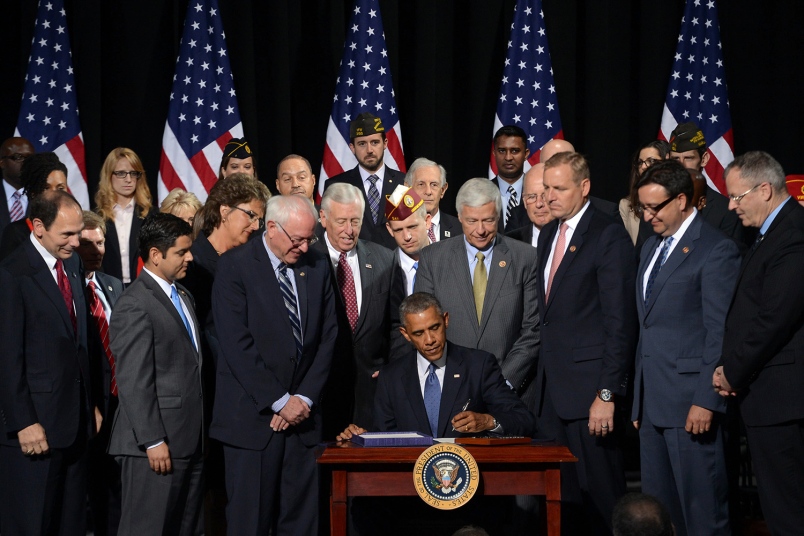 This table has been used by many presidents for bill-signing ceremonies:

A signing ceremony is a ceremony in which a document of importance is signed (approved). Typically the document is a bill passed by a legislature, thus becoming a law by an executive's signature. However, the document may also be, for example, an executive order, international agreement, or a veto statement that invalidates a legislative measure.

Another photo from 1990 showing George H. W. Bush signing the ADA into law: 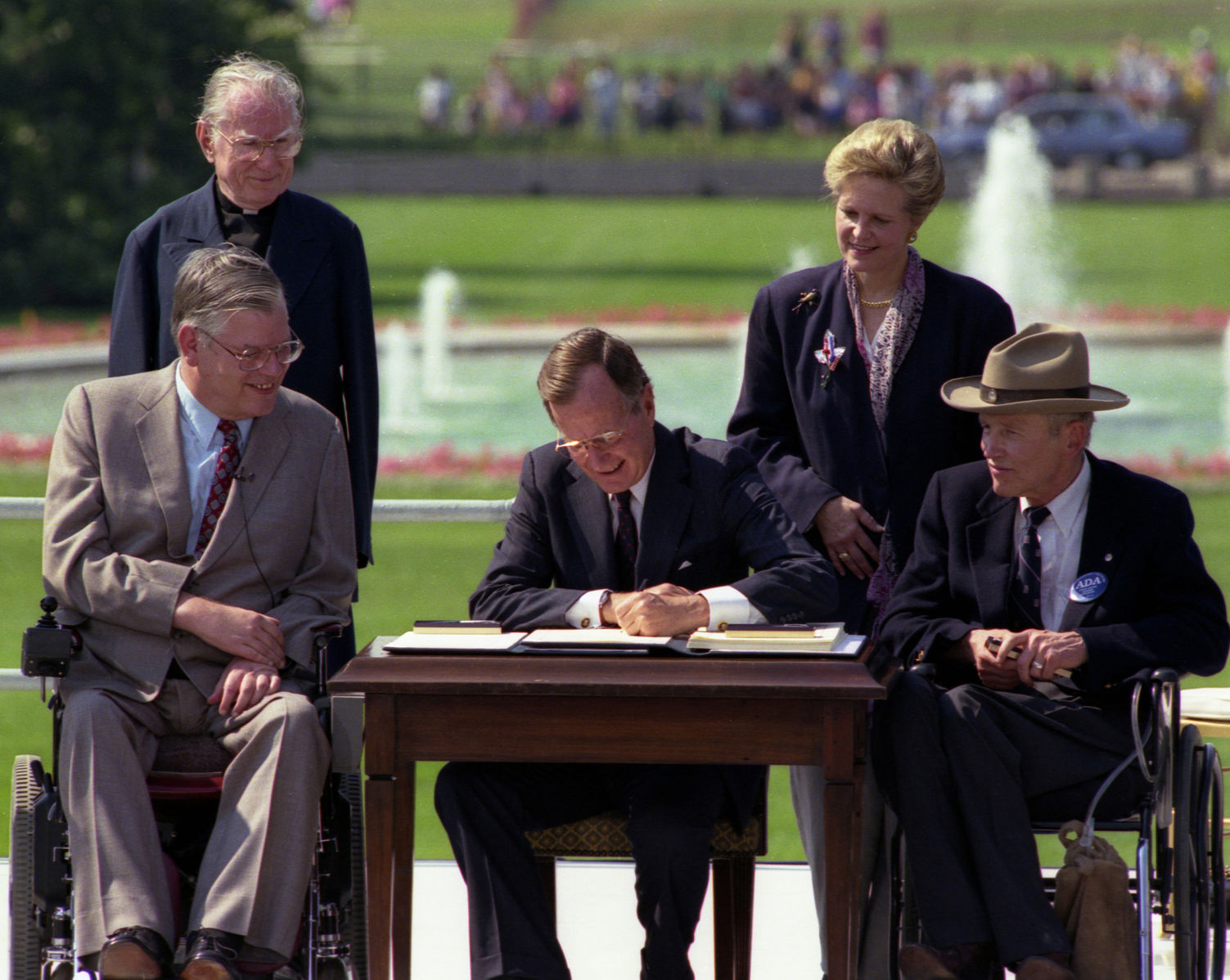 Adding on to the other answers, President Biden has used the table too at the signing of the Infrastructure Investment and Jobs Act, commonly known as the bipartisan infrastructure bill. 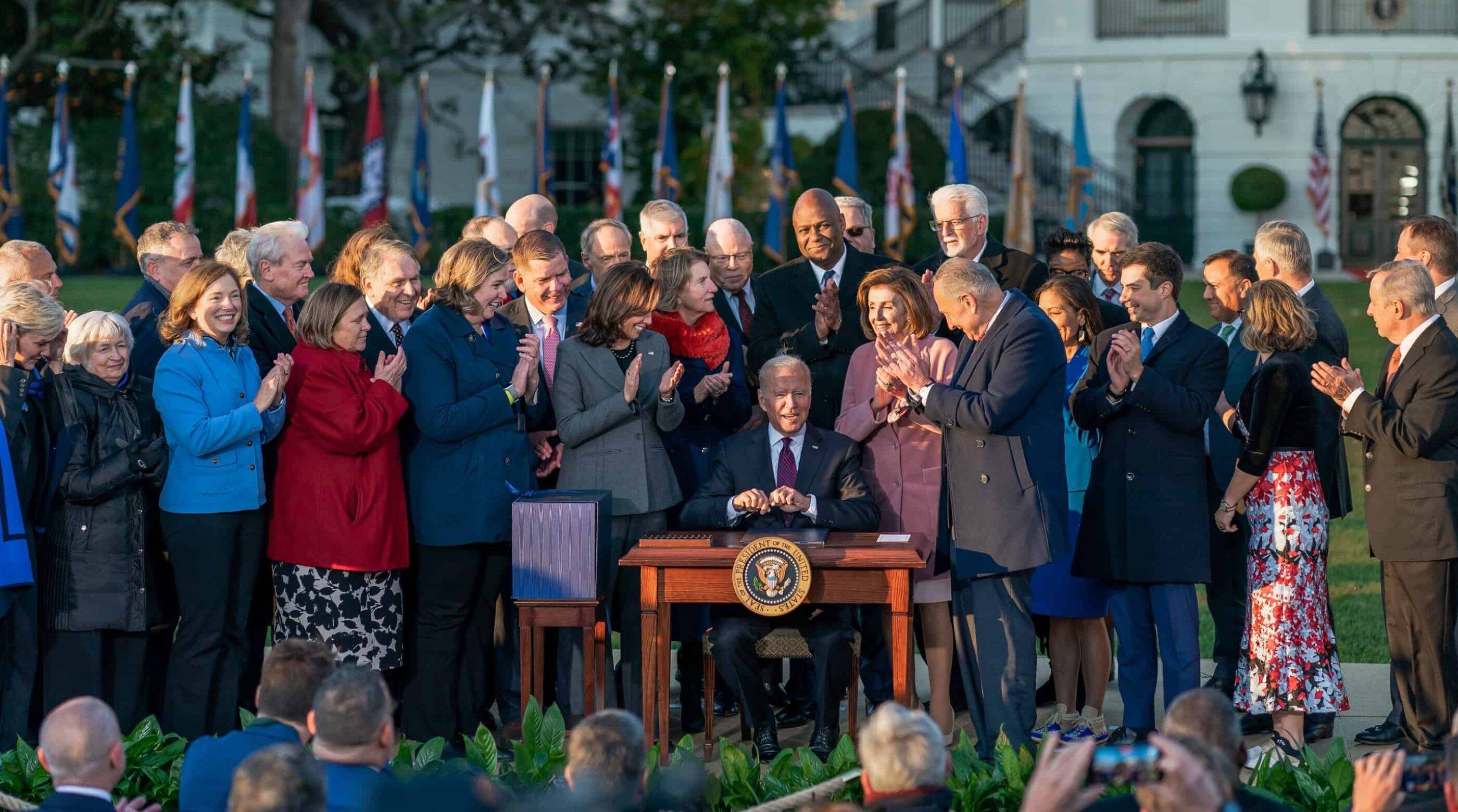 17
In America would it be possible to detain a President on the grounds of insanity?
50
Is there a legal way that can be used to force the President of United States undergo a mental health examination?
8
Do DOJ regulations prohibit a Special Counsel from indicting the President?
0
Trump and Democrats "deals"
3
Hostile answers during US Supreme Court Senate confirmation hearings
6
Has the debate moment when Donald Trump said "elections have consequences" been used in any 2020 USA election ads?
30
Has Biden's campaign, or the Democratic Party, publicly voiced their opinion on granting some sort of immunity to Trump?