Do far-right parties get a disproportionate amount of media coverage, and why?

Anecdotally speaking, it feels like the following parties get a disproportionate amount of media coverage (where "disproportionate" merely means large compared to the proportion of the vote they get rather than a moral judgement), especially in international media or media for non hard-core nerds: National Front (France), AfD (Germany), Golden Dawn (Greece), UKIP (UK), the Party for Freedom (Netherlands), Freedom Party of Austria, and One Nation and also Clive Palmer (Australia). I'd also list Donald Trump in the USA, Jair Bolsonaro in Brazil, or the governing parties in Poland or Hungary, or Recep Tayyip Erdoğan in Turkey, but at least they're in the government. I'm not sure whether far-right and/or populist would be a accurate description for all of them, or maybe merely parties that may be on the receiving end of a cordon sanitaire, but their ability to gather media coverage seems similar.

Do far-right parties get a disproportionate amount of media coverage, and if so, why is that the case? Is it only from media organisations that are secretly in league with far-right politics, or even from those that don't support such politics?

Related question: Why are American elections and politics receiving so much coverage in Canadian and European media? (asked during the 2020 US presidential election)

For what it's worth it, since you also mentioned populism, a 2018 study abstract:

A comparative content analysis of nine thousand stories from fifty-nine news outlets in ten European countries shows that both media factors (e.g., tabloid orientation) and political factors (e.g., response of mainstream parties) influence the extent and nature of populism in the media. Although newspapers in most countries do not overrepresent populist actors and tend to evaluate them negatively, we still find abundant populist content in the news. Several media outlets like to present themselves as mouthpieces of the people while, at the same time, cover politicians and parties with antiinstitutional undertones.

Skimming the paper, their list of populist parties comes from previous papers:

we rely on previous lists proposed by Mudde (2007), van Kessel (2015), and Rooduijn et al. (2014) to identify populist actors. We consider an actor to be populist if they are affiliated to a party which at least two of these authors listed as populist parties.

The 2018 paper itself doesn't contain a full list, but it does have this table, which is indicative; of note they include some (populist) left-wing parties as well: 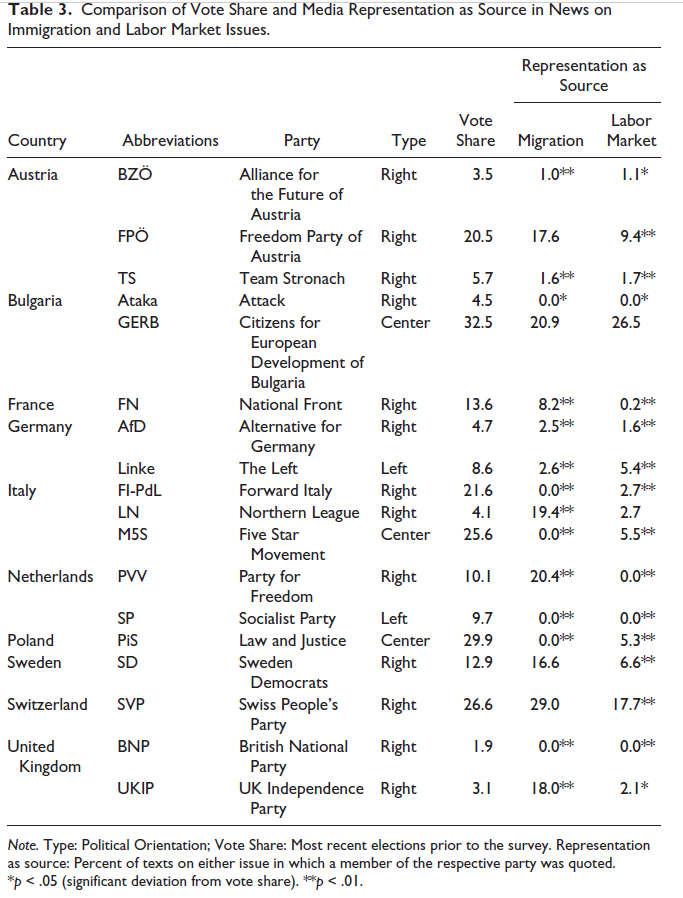 Table 3 shows the voter turnout of right-wing and left-wing populist parties and contrasts it with the frequency with which these parties have an opportunity to speak on the right-wing issue of migration and the left-wing issue of labor market policy. The percentage was calculated based on the total number of statements made by all political actors on each issue.

As the results in Table 3 indicate, the hypothesis was not confirmed over all countries and issues. Only in Italy, the Netherlands, and the United Kingdom, we found the right-wing populist parties to be significantly overrepresented in stories about immigration. For most populist parties, however, we found a strong underrepresentation in news on their owned issues.

our results suggest that in countries where populist parties are excluded from any form of cross-party cooperation (Germany, France, Netherlands, and Sweden), journalists restrict the visibility of populist actors further than in other countries (Table 3). A test for group differences found that the average overrepresentation of populist parties is lower in systems with cordon sanitaire (+11.2 percent) than in those without (+19.3 percent); however, the high in-group variance and low number of cases prevent this difference from being statistically significant—T(14) = 0.08; ns.

(Frankly, a study like this is bound to be methodologically debatable, at least in corner cases. For instance, in that table, UKIP is scored on their national election vote share rather than EP election results, on which they did much better in the same timeframe.)

They also do a quantitative tone/sentiment analysis on the stories, which is far too long to detail here, but the authors' overall conclusions on that

most news outlets actively oppose populist actors. Members of populist parties are evaluated more negatively than other politicians and are actively challenged by journalists in their stories [...]

As for the effect of the newspaper type, there were no surprises:

populist tendencies are stronger for tabloid than broadsheet newspapers—not only with regard to the initiator but also the gatekeeping and interpretive role—is in alignment with previous research and theory (Krämer 2014; Mazzoleni 2008; Moffitt 2016). Although cordon sanitaire is the most important political predictor, tabloid orientation is the most important media predictor for the extent and nature of populism in news.

A 2016 review about "Far Right Parties in Europe" doesn't alas point to any similar paper that would more directly answer your question on the far-right coverage, although it does have a section on the media, which cites various papers stating position principles on how the media should cover such parties and a few papers (mostly on the Dutch media) that discuss the difficulty of separating e.g. the topical discussion on immigration from the increase in popularity of such parties.

Some far-right parties have made it their practice to break social and political norms of their respective country in an attempt to shift the political discourse to the right. (German source)

Media which has no agenda other than making money through advertising benefit from publishing outrageous behaviour. "Dog bites man" is no story, "man bites dog" is.

Some far-right parties are of course aware of this and use it, framing the social landscape by constant repetition of their talking points.

Most centralist media is backed by individuals and corporations that favour the rich, as it is they who direct a lot of advertising revenue their way.

Right-wing groups want that attention. While others are focussed on them, those others are not doing anything concrete to counter them. Just have to see the number of YouTube channels devoted to calling out Trump, but really doing nothing to help shift focus way from him. Citing 'shouldn't dos' is not a plan for change.

Contrarily, the left wing has not really got that much attention, probably because:

The right-wing agenda suits the corporate agenda of minimal public expenditure, except on them.

A lot of the left-wing agenda is public policy in many countries, just not favoured by right-wing governments, though they might have tried to dismantle some of them but met with resistance from the public who had come to appreciate the benefits of them.

Hardly any politicians in the US are leaning to the left, let alone being what could be called truly 'left-wing', though right-wingers will label centrists as left-wing, only if because they are compared to themselves.

Bernie Sanders is only mildly leaning to the left, but the policies he advocates are the standard public policy of many centrist-right governments.

(Note: this answers second part of the question, which is WHY)

Take Trump, for example: every media outlet has been talking about him non-stop for the past 4 years.

In my home country of France, close to 100% of the news about him on MSM has been to criticize him. Even Kim Jong Un (NK) or Mohammed Bin Salman (SA) had more positive stories than Trump...

Same thing in US media (except maybe for Fox)...

So it's not about the far right having more media coverage, but why they have that coverage (far-right or any other party that doesn't align with globalist views).

There is an agenda behind everything; look elsewhere for real journalism.

Not the answer you're looking for? Browse other questions tagged parties media populism .

59
Why are American elections and politics receiving so much coverage in Canadian and European media?

8
King secretly funds left and right wing parties to stay in power. What's this called?
12
Why won't the two main French far-left parties unite and present a single candidate?
6
Why do moderate parties and their leaders fail?
11
Have supporters of "right-wing populist" parties in Europe explained why they trust Trump?
1
Why do Christian democratic parties often name themselves "popular" and "people's"?
5
Why are the 2 US political parties called Republicans and Democrats?
5
Are there groups or parties considered far-right but not populist?
5
In open-list voting systems, how do political parties ensure their leaders (and key figures) get elected?