Are there political structures that are fundementally different? [closed]

Ask Question
Asked 9 months ago
Active 9 months ago
Viewed 641 times
5
Closed. This question needs details or clarity. It is not currently accepting answers.

If so, why haven't, or have they, been put into practice and kept from the mainstream?

By fundamental I refer to (including but not limited to):

I expect this to be a rather naïve example, but just so you understand;

A system in which the populous is split into different factions which run different aspects of life such as agriculture, technology and mass production (similar to the idea presented in Divergent (a novel and film) but without a governing faction).

A useful approach, I think, is to look at the notable categories.

This said, it isn't entirely categorical. The first draft of most of the East Asian countries with Western style legal and political systems often have literally translated wholesale more or less paragraph by paragraph the formal legal codes and procedural rules of European legal and political systems. But, despite having the same exact same blueprints on paper, the way the system works in practice in a place like South Korea or Japan is profoundly different, mostly because the way human beings interact with each other in these transplanted systems is deeply infused with Confucian ideology that is so second nature that it isn't even remarked upon.

Another notable cultural overlay that profoundly influences how a Western style system plays out in practice is India where caste and ethnic distinctions and deep historical practice and custom pervade a superficially British style federal political system. Contrary to modern revisionists who attribute caste practices to British racist patriarchy influences, this political and social organization was even more distinct from the time that genetic evidence indicates that jati boundaries hardened ca. 1000 CE until British influence became pervasive ca. 1600 CE. The pre-colonial caste system of India is probably the closest a society has come in real life to the Divergent books, although the guild based democratic city-states of Europe also have some similarities to it. A less elaborate and simpler caste-like division of labor was present in the Indo-Europeans who expanded across Europe, West Asia, South Asia and Central Asia (especially in the Bronze Age).

For more than five centuries (from 1268 to 1797) the procedure to elect the doge (chief of state) did not change.

Choose 30 members of the Great Council by lot.

These 30 people are reduced by lot to 9.

These 9 people choose 40 other people.

These 12 people choose 25 other people.

These 25 people are reduced by lot to 9.

These 9 people choose 45 other people.

These 11 people choose 41 other people.

These 41 people elect the doge.

I'll add more if I think of them, but this is at least a start.

Anthropologists and sociologists have a model of stages of political complexity that must evolve in sequence to reach higher levels. 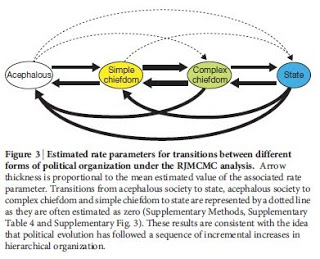 Anthropologists also link social and political structure differences to historical means of production. Many hunter-gatherer societies are organized around brother-sister households. Similarly a history of hoe farming tends to be associated with more matriarchy while plough farming tends to be associated with patriarchy. Polyandry tends to emerge in very economically marginal conditions where one man can't support a wife by himself, while polygyny tends to emerge in clan based patriarchal societies.

Also the idea of left wing and right wing form of dictating life is very much not universal. While virtually every political system has factions, plenty of them don't meaningfully fall on left wing v. right wing lines. This is obscured somewhat because a lot of the most familiar examples are in mostly ethnically homogeneous nation-states. But, in lots of political systems ethnicity or religion, rather than right wing v. left wing, are very important dimensions of political factions. Close to home is the example of the Quebec independence movement in Canada. The basic policies of Quebec independence movement supports aren't far out of the mainstream of Canadian political thought at all and are rather centrist overall. But, they are all about ethnic autonomy and identity. This is divide is true of probably a majority of former European colonies, especially in Africa, but also, for example, in Thailand or Singapore. And, even when you can superficially slot one faction as to the left or right of another, the terms really lose meaning at some point. Spain is another country where the ethic divide dimension is very important. Also Northern Ireland and India.

A left-right divide also has a very different meaning for someone advocating for land reform in Zambia where historically European plantation type farm owners controlled almost all of the arable land, or for a Maoist Revolutionary in India who is really a closer cousin to the anti-monarchists of 19th century Europe than to the 20th century Chinese political faction from which it gains its name, than for Democrats and Republicans in the U.S. or Labour and Tories in the U.K.

Not the answer you're looking for? Browse other questions tagged form-of-government infrastructure .

10
Are there any proposals for a significant electrification of US railroads?
2
In the US, are there any groups proposing unsubsidised infrastructure?
2
Is there any term/discussion on a democracy that allows earning of extra votes?
2
Is there a scientific political ideology?
4
Is there an active government that grants rights to the governed?
4
Why isn't there public pressure to increase the highway speed limits given that most drivers speed on a daily basis?
4
Are there any variants of capitalism that treat states themselves like some form of corporation?
3
Are there any systems (in other countries) comparable to the overt dualism of Puntofijismo?
2
Are there standardized definitions for systems of government?