What was the relative importance of EU regulations as a reason for Brexit?

In the National Review article, Only the Supreme Court Can Effectively Restrain the Administrative State, December 1, 2020, there is a sentence, emboldened below,

If the administrative state continues to grow, it won’t be long before the American people will recognize that elections don’t really change anything, because the real and binding laws are being made and enforced by a faceless bureaucracy that no one seems able to control. And when this recognition dawns, it will be a very dangerous moment for the country, comparable in some ways to the moment that produced Brexit. There were many reasons for Britain’s vote to leave the EU, but one of the most important was the conclusion of many Britons that they did not have any significant ability to control the hundreds of binding EU regulations coming out of Brussels. In effect, the EU lost its legitimacy as a rulemaking body among the people of Britain.

The one entry I found does not suggest "most".

This was an "Attitudes to Brexit Questionnaire" asked online and "accessible from 4 December 2017 to 31 January 2018." For the following chart, the specific question asked was, "What do you believe was the main motive for the majority who voted to leave the EU?"

A Vox article, Brexit: the 7 most important arguments for Britain to leave the EU, June 25, 2016, suggests that dissatisfaction with EU regulations was an important consideration.

Argument 2: The EU is strangling the UK in burdensome regulations

Sometimes these EU rules sound simply ludicrous, like the rule that you can’t recycle a teabag, or that children under eight cannot blow up balloons, or the limits on the power of vacuum cleaners. Sometimes they can be truly infuriating – like the time I discovered, in 2013, that there was nothing we could do to bring in better-designed cab windows for trucks, to stop cyclists being crushed. It had to be done at a European level, and the French were opposed.

Many British conservatives look at the European bureaucracy in Brussels the same way American conservatives view the Washington bureaucracy. Gove has argued that EU regulations cost the British economy "£600 million every week" ($880 million). (Though this figure is disputed.)

A Politics SE question What are the reasons for the rise in Euroscepticism over the last few years? has some answers that point to EU regulations as a reason; but, alas, no surveys.

It seems the answer depends substantially how such a poll question was phrased, and perhaps even when it was asked.

Nuffield College's Centre for Social Investigation conducted a survey some 18 months after the Brexit referendum vote, while the UK Parliamentary showdown over Brexit was happening, which found that

was the 2nd ranked choice of those said they voted Leave, after immigration, and it wasn't very far off percentage-wise, although there's only a graph in the summary I found. 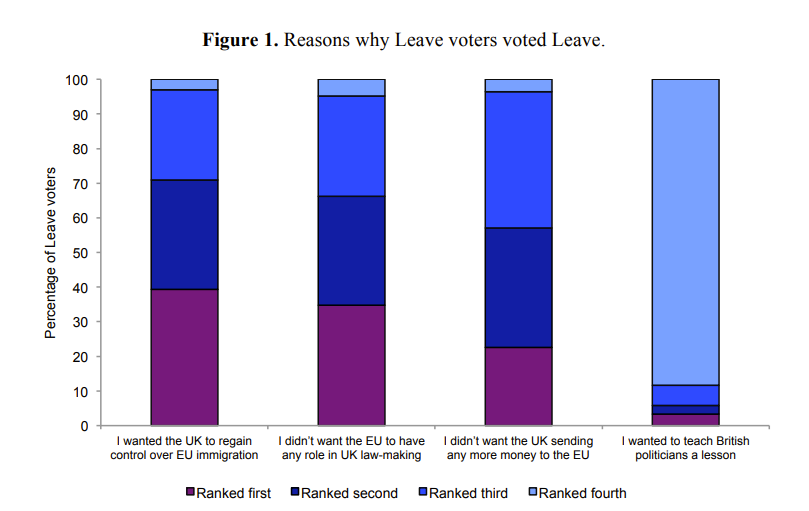 Notes: Each bar shows the distribution of Leave voters according to how they ranked the corresponding reason for voting Leave. Bars are ordered from left to right by the percentage-weighted mean rank. Sample weights were applied.

An important methodological caveat is that the data presented here concern people’s stated reasons for voting Leave or Remain, assessed more than 18 months after the referendum took place. It is therefore possible that they do not reflect the true reasons people voted the way they did. For example, they could be biased by the tendency for people to justify their decisions with post-hoc rationalisations.

N.B. this was a substantially larger sample than from the paper you found:

Approximately 3,000 respondents were surveyed online by the polling company Kantar between 2nd of February and 8th of March, 2018

Also, the paper mentions other surverys, which depending on the wording of the questions, have produced even more different results, e.g. there's a YouGov survey in which immigration came second, behind a complexly phrased proposition that includes "a better balance between Britain's right to act independently":

And another prior poll they mention:

And a 3rd prior poll mentioned in this paper:

the British Election Study team asked their respondents an open-ended question just prior to the referendum, namely ‘What matters most to you when deciding how to vote in the EU referendum?’. They coded the responses into 54 categories encompassing the key themes that respondents mentioned. The most frequently cited reasons for voting Leave were ‘Sovereignty/EU bureaucracy’ and ‘Immigration’ (both mentioned by around 30% of those who said they intended to vote Leave).

[citing:] Prosser, C., Mellon, J. & Green, J. (2016). What mattered most to you when deciding how to vote in the EU referendum? British Election Study, 11 July, published online.

So, it looks like the less directly questions spoke of "regulation" and more generally in terms of [law-]independence from Brussels, the more Leaver voters agreed with the statement, but there's also the issue of when the questions were asked, as they may have been influenced by campaigning messaging, what was the salient issue on the news etc.

I you care about peer review, the same CSI academic is the lead author of such a paper, which is a different in scope, but self-cites the aforementioned study. The latter paper's main thrust is that

argue instead that the UK’s vote to leave stems, at least in part, from Britons’ comparatively weak sense of European identity.

And using various measures for that they e.g. have a graph like this: 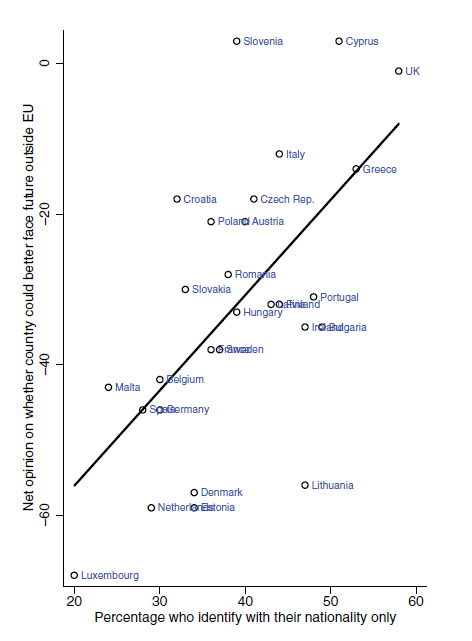 Somewhat reflecting that, an early 2020 YouGov poll commissioned by "Best for Britain" (an org that campaigned pro-Remain) found that few in the UK were in favor of relaxing specific regulations post-Brexit. As I can't find the YouGov poll itself, I'll have to quote the press release of the org that sponsored it:

With reports this week that the EU will demand that Britain retains its ban on chlorinated chicken ahead of negotiations with the US over a trade deal, our poll shows that only one in ten people think Britain should seek to relax food and product safety standards from the current EU-set standards. Half of those who responded said they wanted to maintain current levels of regulation in this area (49%), while over a third thought the rules should be stricter (37%).

On the environment, where the EU fears regulatory divergence could lead to Britain undermining its flagship ‘Green New Deal’ programme, respondents were eager to see higher levels of regulation. While around a third of respondents said they would like standards kept the same (28%), twice as many people thought standards should be made stricter (57%).

The pro-Leave (or at least pro-free-market) camp attacked this poll on how it was worded:

Victoria Hewson of the free-market IEA think-tank said the polling was “misleading”, adding: [...] “If the poll had asked ‘Should the British Government or the EU decide on our laws?’ the answer to their questions may well have been different.

Now that's not to say that specific segments of the UK public didn't take issue with specific EU regulation areas. For example, there's a paper on the attitudes of Scottish fishermen, who based on a sample (N = 69) overwhelmingly (93%) voted for Brexit and had overwhelmingly negative attitudes towards anything EU. Somewhat ironically, that paper/survey failed to ask the more specific question whether the Common Fisheries Policy was at the core of this antipathy, but assumed citing a PhD thesis that it is so.

What I am interested in is any surveys that show the relative importance of dissatisfaction with EU regulations as a reason for Brexit.

The premise of your question is good, but I think you might have accidentally gotten side-tracked with this point here. It's not that there are specific regulations or laws that the people don't find appealing. Sure there are some. It's been in the news. But in many cases, most of the rules themselves may be just fine with most people both in spirit and implementation. That's just details. It's the fact that the people feel as if they had no say in the creation of those rules (including the ones they agree with), not even indirectly - i.e. by being able to directly elect the very top leadership into power and have them accountable (even by worse-case-scenario impeachment/recall) for their actions. This is what, as you very clearly present with your question, helped to conceive the idea of Brexit and steadily contributed to the momentum of it actually happening.

There probably was a factor due to annoyance at EU rules. Banana curvatures, condom girths and removing imperial units* in British groceries were all examples of rather asinine and useless EU regulations that could easily be weaponized into a theme of regulatory overreach by Leavers to lure the gullible.

While not in polls, these issues had been covered at one point or another by lots of press articles and contributed to alienating public opinion against Brussels, so it would be surprising if that did not contribute to frustration against the EU.

Mistrust of government due to regulation perceived to be either frivolous or detrimental to one's interest is a long standing grief in democracies.

Re. Immigration, one might find it amusing that soon after Brexit Priti Patel said that Britain could now benefit from accepting non-EU immigrants more easily. Couldn't find the exact Patel quote, but I distinctly remember it and that link is in the ballpark.

* not so much that imperial units had to be removed, as metric had to be displayed. Retailers picked one and ditched imperial. In Canada, a thoroughly metri-fied country, many foods are still labelled in pounds: silly, yes, but also hardly something that needs regulating - who cares?

p.s. I would be Remain if I lived in the UK. The links I gave for all 3 laws aren't the full story, they're the first I found for each subject and may very well paint things overly negatively. The point is that it was easy to weaponize these regulations as anti-EU talking points because of how easily they invite ridicule.

50
What are the reasons for the rise in Euroscepticism over the last few years?

31
What political motivations were provided by Brexit proponents besides these?
14
Why is immigration control considered to be the first Brexit priority?
35
What happens if it is proved that "vote leave" campaign broke campaigning laws?
5
What's the extent of Russian involvement in Brexit, according to latest research?
36
What would be the subject of a second Brexit Referendum?
48
How did Theresa May remain PM after her Brexit deal was rejected?
6
Will Britain be exempt from Article 13 if Brexit passes?
6
A paradox at the heart of the Brexit argument
45
Why is the UK still pressing on with Brexit?