Why was the mail-in ballot rejection rate (seemingly) 100% according to ABC News in two counties in Texas in 2016?

ABC has a fairly detailed analysis of mail-in ballot rejection rated in the 2016 and 2018 elections. A couple of Texas counties stand out on the map they show as having 100% rejection rate, namely Val Verde county and Hardeman county, albeit the latter with a small raw count of only 111 such votes (the former shown below with 839): 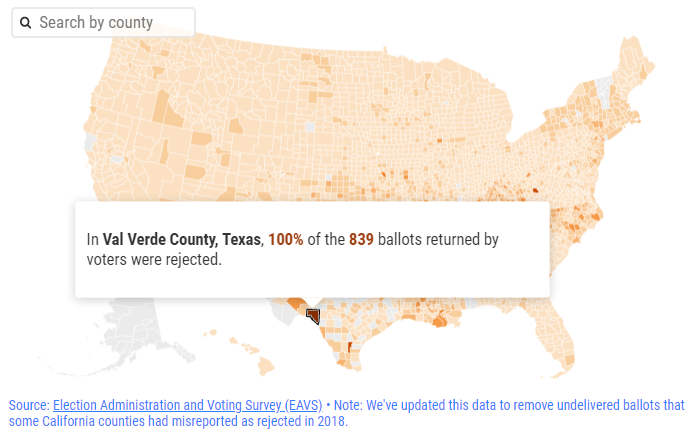 This looks to be a data entry error either by the Election Administration and Voting Survey administrators, or by the county-level respondents to the EAVS, followed by ABC reporting the erroneous data without error checking.

The issue can be seen if we download the data files from which ABC's graphic draws - these can be found here, under the 2016 heading. If we look at the two counties you identified which show a 100% rejection, Val Verde and Hardeman, we can then look at their responses to questions C4a and C4b, which should be the number of civilian absentee ballots that were counted and rejected, respectively, in the November 2016 general election.

For both Val Verde and Hardeman counties, these boxes both read 839 or 111 respectively, which is clearly an error, as the two boxes should sum to the response to question C1b; the number of civilian absentee ballots that were returned by voters and submitted for counting.

Below is an extract from the data set showing the mentioned columns, with the two counties, as well as an example of a Texan county without such a data error - tl;dr: the C4b column has the wrong numbers in for these two counties; it should be equal to the sum of the C5 columns, and C4a+C4b should equal C1b.

4
Why was the reelection rate for the US House of representatives in 2010 the lowest since 1970?
91
Why was Trump winning the 2016 election, when I know so few people who admit to voting for him?
4
Why is it news that Trump was overheard talking to Sondland about "the investigation" on July 25?
1
According to Gallup was New Hampshire the only state more liberal than conservative to vote more Republican than the national average in 2016?
4
Why has the state of Arizona taken so long to return results in the 2020 US Presidential Election?
4
Why did the Republican shift in South Texas not fully show down-ballot?
9
How many mail-in votes were disqualified for failing the signature match test at the US presidential elections in 2020?
14
Why was Warnock's election called while Ossoff's wasn't? Aren't they both on the same ballot?