What does the US have to gain if more nations establish their relations with Israel?

Except for Bhutan, President Trump and Secretary Mike Pompeo played a leading role in these series of events.

What does the US have to gain if more nations (especially Muslim nations) establish relations with Israel?

Is it that the US is playing a leading role in world peace or are there any strategic interests?

It seems likely that (3) is the main driver of this. It would be a mistake to imagine that this is all about the USA. Though Trump did preside over a radically differenct Middle East policy that has coincided with multiple Arab countries signing peace accords with Israeli.

The Practical Importance Of International Recognition

Most countries recognize their mutual sovereignty diplomatically, and a large share of international wars involve countries that do not recognize another country's sovereignty over some or all of its territory.

In international diplomacy, not recognizing a country's existence is the metaphorical (and sometimes literal) equivalent of pointing a loaded gun at it at all times, whether or not the non-recognizing country actually fires it. It can escalate to war with little provocation on short notice and requires constant military vigilance on the part of the unrecognized country.

Israel has historically not be recognized as a legitimate sovereign country by most of its neighbors for the understandable reason that prior to British colonial government decisions made after World War I, no Israeli state had existed for many centuries and most of the citizens of Israel were 20th century immigrants who displaced and/or subordinated Palestinians who had preceded them there, a people with whom other Middle Eastern and North African Muslims shared many commonalities.

The unwillingness of its neighbors to recognize Israel gave rise to wars with its neighbors in which Israel prevailed in 1948, 1967, 1973, and to a Palestinian insurgency and at times terrorism campaign (with meaningful foreign support from Israel's neighbors) that has continued on and off (but mostly on) since then.

The international military conflicts mostly subsided after the Camp David Accords negotiated by the U.S., in which Egypt recognized Israel in exchange for a stream of foreign aid to Egypt, basically as a bribe, in order to maintain peace with Israel, which the U.S. has maintained since then. A similar arrangement was reached with Saudi Arabia and the U.S. has continued to provide foreign aid to Israel to help prevent its annihilation which could have been as devastating to the Jewish people as the Holocaust.

Israel, Jordan and Egypt are now some of the primary foreign aid recipients of the U.S., something that peace in the Middle East secured by wider recognition of Israel by its neighbors could mitigate. Saudi Arabia is a major source of U.S. military sales for similar reasons.

It’s also worth noting the breakdown between economic and military spending in these countries: Of the roughly $17.3 billion foreign aid dollars given to the top 10 countries, about 57% of it ($9.77 billion) was designated as military funds. In comparison, overall US foreign aid allocated to military funding was just 28.8% (or $13.5 billion) of its foreign aid budget in 2018.

Peace also reduces pressure to make U.S. military sales to uncertain Middle Eastern arms trade partners who insist on the sales in order to refrain from attacking Israel. The table below shows that those sales on essentially both sides of a potential Middle East war in the future are substantial. 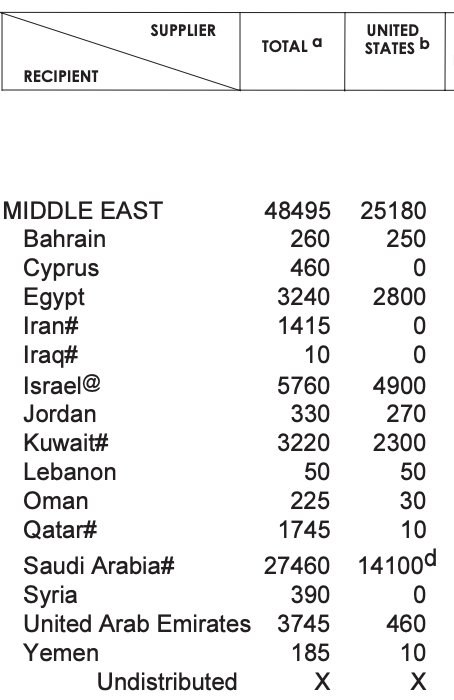 While these figures are somewhat dated, the general trend in U.S. military transfers has held steady in this region of the world.

Why Does The U.S. Politically Supports Israel's Continued Existence?

The U.S. has also had non-Jewish immigrants from the Middle East and North Africa since the 18th century. But immigrants to the U.S. from this region have been disproportionately non-Muslim relative to the source populations, and until the last few decades, the U.S. has had a much larger Jewish population than its Muslim population.

Furthermore, the Jewish population of the U.S. has been highly concentrated in the Northeast and a few other population centers in the U.S. that has made it possible for Jewish culture and Zionist (i.e. pro-Israel) sentiment in those communities to remain strong. In contrast, the U.S. Muslim population, even as it has grown in recent decades has been more diffuse and less well established at a community scale.

U.S. support for Israel is also not just Jewish in origin. Many Evangelical Christians (a key political demographic on the American right that is balanced by Jews as a key political demographic on the American left) are strongly pro-Israel for reasons of their own religious faith (which places greater emphasis on the Hebrew Bible a.k.a. Old Testament than some other Christian denominations). Evangelical Christians, like all Christians, have roots in Judaism, and for example, mutually hold the religious sites there that are sacred to the Jews as sacred to them as well.

There is also cultural similarity and comfort between the U.S. and Israel. Israel is a country of people who mostly have European ancestry, like most Americans, and unlike other peoples of the Middle East and North Africa. Israel also has one of the most advanced economies in the region, with an economy that is more similar to that of the U.S. These similarities have fostered some sense of relatively likemindedness with Israel that is not shared with other countries in the region.

So, of the U.S. political factions that care about Israel, one way or the other, these factions have historically been predominantly strongly pro-Israel.

One of the chief things the US wants to gain is stability in the Middle East, and thus less need for states there to use terrorist groups as proxies. In addition, this firms up the Middle East pro-US faction by erasing the major fracture in it. Third, one must remember that the US is made of its citizens, and many citizens of the US have a religious reason they want to see Israel succeed. Finally, Israel has been a steadfast ally of the US, especially on UN votes, and paying that back by negotiating peace showcases the benefits of having the US as an ally.

Of course the USA wants peace, but it also wants to sell weapons (and maybe establish military bases). UAE wants to buy F-35; I'm sure Bahrain and Morocco are also interested in American weapons.

The USA is breaking with international consensus on Morocco. As part of the USA-brokered deal with Israel, the USA will be the first country in the world to recognise Moroccan sovereignty over the Western Sahara which Morocco invaded in 1975 and has occupied since in defiance of the international community. Thousands of Sahrawi's have been imprisoned, tortured and disappeared whilst resisting Morocco's occupation. In fact, roughly half of the population fled to neighbouring Algeria following Morocco's invasion.

The USA is simply following a policy of holding its close relationship with Israel above all over commitments to the detriment of its own international standing.

As a Sahrawese journalist has pointed out, the real effect is to "legitimise two occupations - that of the Israeli occupation of pre-1967 Palestine and that of the Moroccan invasion of Western Sahara."

Not the answer you're looking for? Browse other questions tagged united-states israel .