Does this image represent interstate migration?

I was reading through Twitter and came across this image. It showed states that shifted Republican and Democrat from 2012 to 2020. 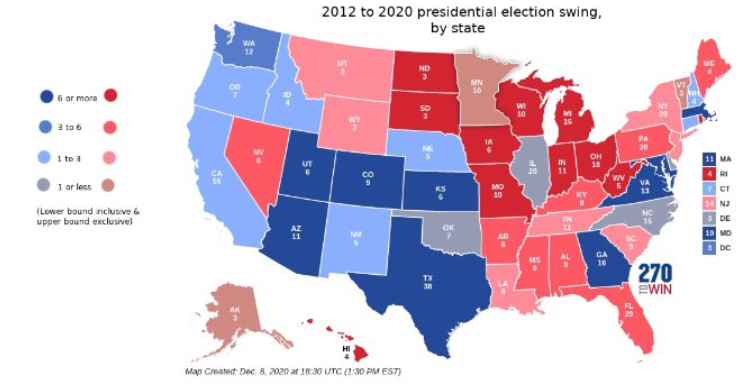 This is not your ordinary red state, blue state map. But it is a map showing which states got redder and bluer.

There is a pattern I noticed. The Northeast (except parts of New England), the Midwest (especially), lower population South, and a few others trended blue.

Read: https://www.newsweek.com/will-blue-invasion-red-state-america-finally-pay-off-2020-1519051 -- it's sort of biased but it talks about this trend in a factual way.

Turnout was a key factor. Georgia turned markedly blue not because of people moving to Georgia but rather because Stacey Abrams drove a massive get-out-the-vote campaign in Georgia.

Utah turned bluer because there was no way to go but down from the 48% routing taken by Obama in 2012 against the first Mormon candidate for president. Trump took Utah by "only" 20.5% in 2020. That's still a landslide.

Not the answer you're looking for? Browse other questions tagged united-states presidential-election demographics .

24
When and why did the American Republican Party become widely supported in the South?
2
When is each US state likely to declare its result in the 2016 US presidential election?
16
What effect does the recent SCOTUS decision on faithless electors have on the National Popular Vote Interstate Compact?
8
Does National Popular Vote Interstate Compact make allowances for states to leave after joining?
0
Why has the deviation in margin shifts for states swinging in presidential elections relative to the nation shrunk?
5
Why is the western portion of the USA moving towards the Democratic Party while the Midwest is moving towards the GOP?
32
Is there objective proof that recent bills (1st half of 2021) that restrict voting are targeting Democratic voters specifically?