What to do if the senate blocks all nominations?

My question is specific to USA politics.

In USA officers and judicial nominees are often subjected to senate confirmation. However, it seems in today's polarizing climate this can effectively break the system. For example, let's say a President is from team Purple and the senate is controlled by team Yellow. Then the senate can effectively block every nominees by voting along the partisan line thus effectively breaking or at least hampering some institutions.

Is there any procedure in case both branches are acting in such a manner? Is there anything like a "nuclear option"?

There is no "nuclear option". There are options for the incoming President to appoint officials into their positions on an acting basis. However, these options often have limitations on who can serve and the duration they can serve in that position.

Hence, should the Senate block all nominations, most departments will continue to have Secretary in an acting position or in another way. In this sense, the work of the department is not hampered per se.

Nevertheless, Senate confirmation is the way to go if the President wants his choice of secretaries to serve and for them to serve legally.

The Federal Vacancies Reform Act of 1998 is the main statute concerning the temporary appointments of vacant advice-and-consent position in executive agencies.

While there are limitations on who can serve in an acting capacity, usually long-term civil servants or lower-level appointees, there are loopholes that may allow the President to appoint someone he wants by appointing that person to a lower-level position that does not require Senate confirmation first before making him the de facto Secretary.

Other times, the new administration will bring in one of their own, though the legality of this is somewhat murkier. Unlike cabinet positions, many upper-level jobs at the various departments do not require Senate confirmation, so the new administration can appoint a new person to such a job and then designate him or her the new acting cabinet member.

The first 300 days is the most clear-cut. Once a new President is inaugurated, the Act provides him with the option of temporarily appointing acting secretaries into their positions.

The relevant section of the law is as follows:

(b) With respect to any vacancy that exists during the 60-day period beginning on a transitional inauguration day, the 210-day period under section 3346 or 3348 shall be deemed to begin on the later of the date occurring—

(1) 90 days after such transitional inauguration day; or

(2) 90 days after the date on which the vacancy occurs.

In the year of a transitional presidential inauguration, such as 2017, the Act permits an acting official to serve for 300 days after the vacancy occurs with respect to any vacancy that exists during the 60-day period beginning on the transitional inauguration date. 5 U.S.C. § 3349a(b).

The acting secretary can continue serving for 210 days if first or second nomination sent to the Senate for the position is "rejected, returned, or withdrawn".

The relevant section of the law is as follows:

(b) (1) If the first nomination for the office is rejected by the Senate, withdrawn, or returned to the President by the Senate, the person may continue to serve as the acting officer for no more than 210 days after the date of such rejection, withdrawal, or return.

However, there are limitations to who can serve during this period. Hence, it may not be feasible for the same official to serve in the same position. The President will likely have to appoint someone else – specifically the official holding the position of the First Assistant – to be the acting official.

While a first or second nomination generally permits an acting official to serve while the nomination is pending before the Senate, a nominee can only serve as the acting official if the person was the first assistant to the vacant position and served as such for at least 90 days out of the previous 365 days before the vacancy began.

Nevertheless, this is sometimes ignored. For example, Michael Bright served as the President of the Government National Mortgage Association in violation of the Act.

The President can again appoint the official holding the position of the First Assistant to be the acting official. 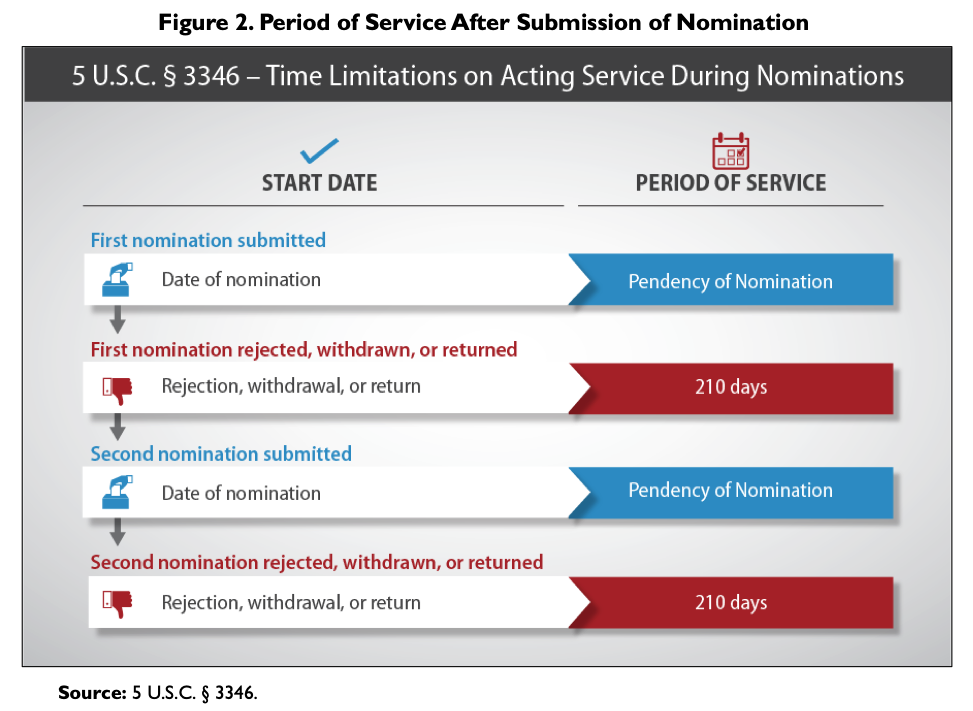 Some departments allow an official to perform the "functions and duties" of the Secretary without ever officially becoming the Secretary or the Acting Secretary.

If there is no acting officer serving in compliance with the Vacancies Act, then generally “only the head of [an agency] may perform” the functions and duties of that vacant office.

Presidents can also make recess appointments when the Senate is in recess but it is not likely feasible as it involves adjourning Congress.

There does not seem to be enforcement mechanisms within the Act that removes any officers serving in violation of the Act.

For example, while the Act provides that an “office shall remain vacant” unless an acting officer is serving “in accordance with” the Vacancies Act, the statute does not create a clear mechanism to directly implement this provision. Accordingly, the text of the Vacancies Act does not contemplate a means of removing any noncompliant acting officers from office.

Again, if the acting officer serves beyond the pendency of the first or second nomination and the subsequent 210-day periods, any action performing a function or duty of the office will have no force or effect.

Not the answer you're looking for? Browse other questions tagged united-states senate nomination .

9
Can the Senate postpone confirming a new Supreme Court judge virtually indefinitely?
0
Supreme Court Nominations
15
Can the Senate reject all cabinet nominees?
10
What influence do Democrats have in stopping Trump's nominations from being approved?
3
Can a large number of federal judges be confirmed at once in the US Senate?
5
Do Senate committees really ever interview low-level nominees?
2
What are the powers of the Chairman of the Senate Budget Committee?
10
What happens if a Senate Committee is 50-50 split on a nominee?