What's with the threatened Trump veto due to insufficient individual covid relief?

OK, this sounds reasonable-ish/arguable... for Democrats. I thought the Reps had been holding out on covid bills before because the relief measures supposedly made it more lucrative to be Covid-furloughed than working (though a certain breed of free marketer/libertarian might argue that it would be better to hand out lotsa money without much costly oversight to consumers rather than play favorites with - and invite lobbying on - which industries most deserve bailouts in the midst of a massive systemic restructuring).

Did I totally misunderstand previous positions? From USA Today in July

Democrats have argued for an extension of the benefits. Though President Donald Trump and some Republicans worry that extending the supplement will disincentivize unemployed Americans to return to work because they were earning more through unemployment than their job.

“We had something where ... it gave you a disincentive to work last time,” Trump said in an interview with Fox Business earlier this month. “We want to create a very great incentive to work."

Trump had supported (higher) stimulus checks to individuals before, but he wanted them as a separate law. 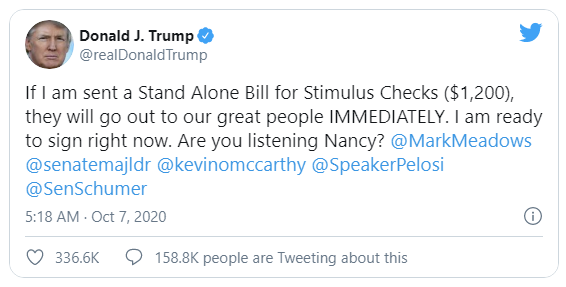 Back in October, Trump (via Mnuchin) had also proposed a $1.8T stimulus.

The plan would mark an increase from the $1.6 trillion the Trump administration previously proposed. House Democrats passed a $2.2 trillion bill earlier this month, and the sides have struggled to find a consensus in between those figures.

In a tweet before the meeting [of Pelosi and Mnuchin], Trump urged negotiators to “Go Big!” Trump later added more confusion to a chaotic week of discussions over aid.

“I would like to see a bigger stimulus package frankly than either the Democrats or Republicans are offering,” he told radio host Rush Limbaugh, hours after apparently signing off on the offer that costs $400 billion less than the Democrats’ [$2.2T] plan.

I could not find out immediately what that $1.8T plan entailed in terms of direct checks (i.e. if it included that $1200 figure for checks or another.) But it seems that the $1.8T Trump plan died due to it being neither supported by Democrats who wanted more, nor by Senate Republicans who wanted less, according to a CNN on October 16:

Senate Majority Leader Mitch McConnell publicly, and explicitly, shot down the idea any deal at or above $1.8 trillion would ever reach the Senate floor. In other words, he has no interest in anything Pelosi and Mnuchin are even discussing.

Instead, he will put a pared back $500 billion Covid relief proposal on the Senate floor next week. Asked back home in Kentucky if the proposal lined up with what Trump was pushing for, McConnell chuckled. "Actually, no," he said. "He's talking about a much larger amount than I can sell to my members."

You should also note that Trump also complained about various things included in the non-Covid-stimulus part of the 2021 appropriations bill(s).

He said: "This bill contains $85.5m for assistance to Cambodia, $134m to Burma, $1.3bn for Egypt and the Egyptian military, which will go out and buy almost exclusively Russian military equipment, $25m for democracy and gender programmes in Pakistan, $505m to Belize, Costa Rica, El Salvador, Guatemala, Honduras, Nicaragua, and Panama."

The president questioned why the Kennedy Center, a performing arts complex in Washington DC, was set to receive $40m when it is not open, and more than $1bn has been allocated to museums and galleries in the capital.

Mr Trump concluded: "Congress found plenty of money for foreign countries, lobbyists and special interests, while sending the bare minimum to the American people who need it. It wasn't their fault. It was China's fault.

"I'm also asking Congress to immediately get rid of the wasteful and unnecessary items from this legislation and to send me a suitable bill, or else the next administration will have to deliver a Covid relief package."

So he now says he wants both a reduction in other spending and an increase in stimulus checks. Democrats seem quite willing to go for the latter, but probably not the former (or at least they haven't made high-profile comments about cuts).

In a tweet, Pelosi said, "at last the president has agreed to $2,000 — Democrats are ready to bring this to the Floor this week by unanimous consent."

Reuters also noted that Trump's strong opposition came a bit as surprise because he was silent for months on the topic.

The White House did not signal any objections to the legislation before it passed and gave every expectation that Trump would sign it. Treasury Secretary Steven Mnuchin was involved in the negotiations over the bill.

This last claim seems to be correct, as NPR (see 1st link) noted on Dec 8:

Separately, Treasury Secretary Steven Mnuchin released a statement Tuesday evening saying that he presented a proposal for a $916 billion package to Pelosi, which included both money for state and local governments and liability protections. Mnuchin said he reviewed that proposal with McConnell, the president and House Minority Leader Kevin McCarthy, R-Calif.

But maybe Mnuchin didn't clear it with Trump? Who knows... I mean before Trump suddenly (?) objected Mnuchin had even declared on Dec 21:

Treasury Secretary Steven Mnuchin said Monday that he expects Americans will start receiving stimulus checks as early as next week from the COVID-19 relief package that Congress is poised to approve.

"The president wanted direct payments, so we will be sending out next week direct deposit," Mnuchin said on CNBC. "I expect we'll get the money out by the beginning of next week."

Some in the press (e.g. the Hill) have also raised this point of whether Mnuchin’s position had diverged from Trump's. Alas, it seems Trump won't talk to the Democratic leadership anymore, so Mnuchin is the only conduit of the administration for negotiation on the matter with the House.

Trump’s opposition to the bill has frustrated members on both sides of the aisle in the wake of Mnuchin’s assurances he would sign it.

There's now skepticism about whether Mnuchin is speaking on behalf of the president. Yet the bad blood between Pelosi and Trump is so severe that the pair haven't spoken directly in over a year. And [Steny] Hoyer said Thursday that Democrats have no other choice but to trust that the Treasury secretary is acting as Trump's proxy.

I'm not sure how much Trump was influenced by this, but Fox News (which has seems to have fully lined up behind Trump's point on this) invited Chip Roy to speak in one of their shows, and he said that his Freedom Caucus group sent Trump a letter asking him to veto the legislation.

However, others in the GOP said basically they felt betrayed by Trump on this:

The $600 stimulus checks, which Trump now complains are too small, were first floated to Democratic leaders by Mnuchin in a Dec. 8 phone call.

Rep. Don Bacon (R-Neb.) told his GOP colleagues in a Wednesday call that he felt “Trump threw us under the bus.”

“The president was updated on this bill every step of the way by the GOP leadership. The COVID supplemental is a good compromise and the president should take it,” Bacon said in a public statement after the call, standing by his comments.

He's screwing McConnell / the Republicans for not backing his crazy coup nonsense and for congratulating Biden on his victory. Hell hath no fury like a trump scorned.

He also realizes that bigger checks are an incredibly popular position, making this move even more damaging.

Not the answer you're looking for? Browse other questions tagged united-states donald-trump covid-19 .

0
What is this stalemate on Covid relief payments all about?
13
Do any Republicans support $2000 stimulus checks?

10
What's the position of Donald Trump regarding recreational use of marijuana?
2
What's Trump's frustration with the WTO?
117
Why is Trump dubbing COVID-19 as the "Chinese virus" considered offensive, while many past epidemics have had similar naming schemes?
2
As of August 2020, are Social Security Offices in the US closed due to COVID-19?
41
Why are Democrats blocking COVID-19 pandemic relief bills with the objection that it's not enough instead of passing it and then passing another?
5
Is the COVID relief package the same legislation as the omnibus bill?