In the US, have COVID deaths been evenly distributed among registered party voters?

In the US, have COVID-19 deaths been evenly distributed among registered party voters?

That is, early in 2020 the blue states were the first to suffer. Later in 2020, the red states are suffering. For 2020 as a whole is the mortality rate about equal for both major parties, or has one side suffered greater mortality?

I strongly doubt the CDC collects data on this angle (party affiliation) among the demographics factors they do ask for. So any answer is probably going to be an approximation based on where people lived. In that regard AEI has a breakdown by red/blue/swing states, but only to mid Oct and it's per-capita rather than raw number of deaths.

In a forward stepwise procedure in a multivariable model for case rate, percentages of the state population that were Hispanic or black, median age, median income, population density, and (residual) percentage poverty were retained as statistically significant and explained 62% of the variation between states in case rates. In a model with political party in power included, along with any additional variables that notably affected the adjusted association between party in power and case rate, 69% of the variance between states in case rates was explained, and adjusted case rates per 100,000 people were 2155 for states with Democratic governments, 2269 for states with mixed governments, and 2738 for Republican-led states. These estimates are based on data through October 8, 2020.

Conclusions: U.S. state-specific demographic and socio-economic variables are strongly associated with the states’ COVID-19 case rates, so must be considered in analysis of variation in case rates between the states. Adjusting for these factors, states with Democrats as the party in power have lower case rates than Republican-led states. [...]

A similar analysis of COVID-19 death rates gave adjusted death rates that were lower in Democratic states and mixed government states than in Republican states, though not statistically significant lower. Whether we found a statistically significant association of death rate with the percentage Democratic of the vote in the 2016 presidential election depended on how we analyzed the percentage, though the associations were in the same direction as those in the party-in-power analysis.

Pew also has some stats like this, but somewhat more fine-grained, at the level of congressional district: 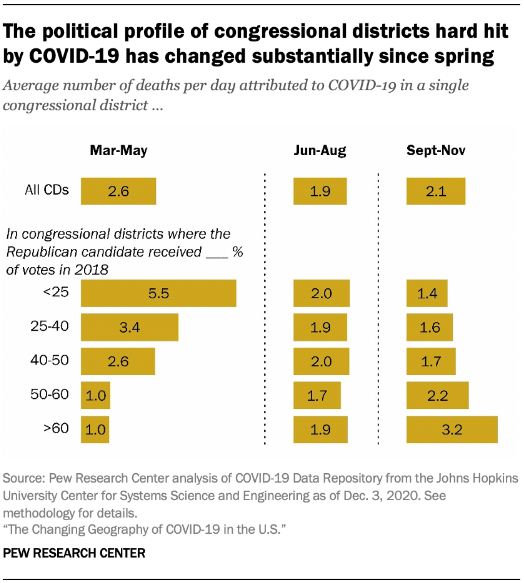 And they have a more up-to-date graph in the style of the AEI one, but this one is not per-capita: 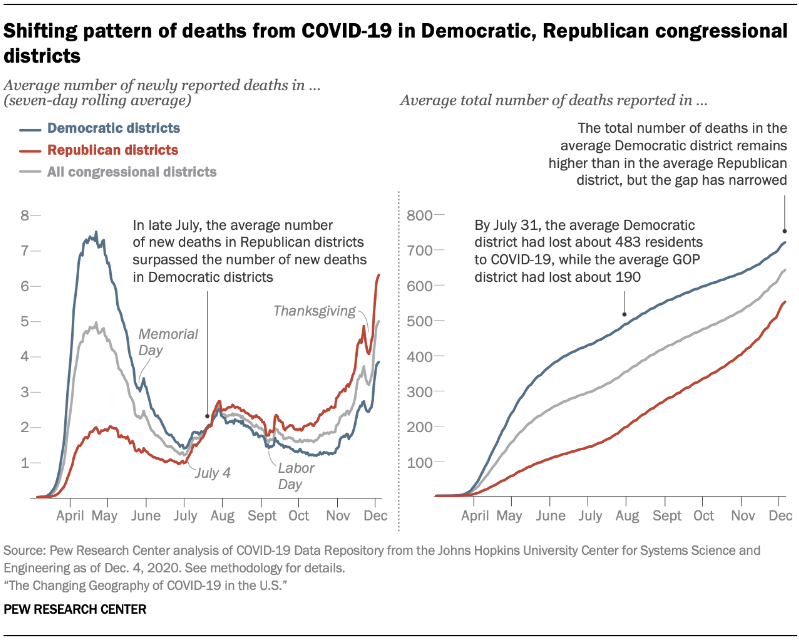 But from September through November, the death rate has been roughly twice as high in Republican strongholds than in places where the GOP lost the 2018 vote by wide margins. (Note: 2018 vote share is used for this analysis, since district-level data is not yet complete for the 2020 election.) [...]

So if you want to go with this last (district-level) measure, which seems the most fine-grained data available, overall the "Republican" deaths from Covid-19 still have not caught up with the "Democratic" ones, as a cumulative figure.

Not the answer you're looking for? Browse other questions tagged united-states parties covid-19-virus statistics .

12
Does the two-party system influence engagement?
3
Do I have to be a registered voter of a party to attend their caucus?
3
In general elections, what percent of registered party voters defect, on average?
11
Why have Labour and Lib Dem not been registered in Northern Ireland?
52
Why did political parties form in the United States?
5
Would switching to a proportionate House require a constitutional amendment?
0
How have US pro-life groups responded to Trump's COVID-19 crisis response, given that it could permit more deaths?
2
Is the UK reporting (extra) deaths in care homes now as related to Covid-19?
25
How do leaders choose between lives and money?
2
What have been the dates on which the state of alarm in Spain for Covid-19 has been extended?