How does the recent EU-UK trade treaty "go beyond a Canada-style" agreement, but still not require ratification by national parliaments under EU law?

The rules for ratifying EU trade treaties depend on what's in them. There are two categories known as "EU-only" and respectively "mixed" treaties, roughly discriminated along the lines in the following table: 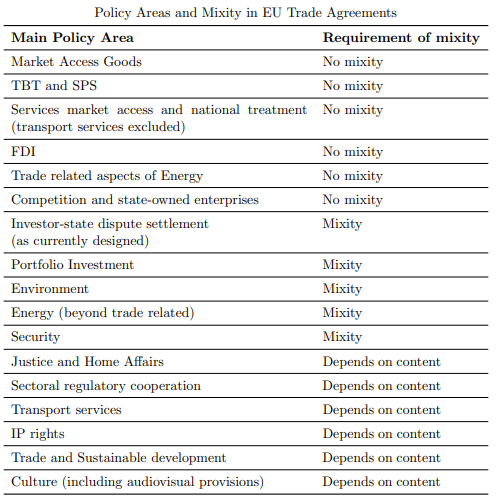 By all accounts, the EU-UK treaty will not require ratification by the national parliaments of EU member countries.

On the other hand, Reuters says e.g.

British Prime Minister Boris Johnson on Thursday had described the last-minute agreement as a “jumbo” free trade deal along the lines of that between the EU and Canada, and urged Britain to move on from the divisions caused by the 2016 Brexit referendum.

The BBC report added that at first look, the full post-Brexit text went beyond a so-called “Canada-style” deal.

So, in what sense does the EU-UK trade treaty go beyond a Canada-style deal, while not becoming a mixed treaty (that requires ratification by national parliaments under EU law)?

According to Irish Times:

The overall agreement largely concerns issues that are shared EU powers like trade, but it does include some aspects that involve a mix of national and EU powers. Technically, this should mean that it requires ratification in national parliaments. However, national governments have the power to waive this requirement, and the Commission will propose that they do.
Westminster is due to hold a vote on whether to ratify the deal on December 30th. It is too late for the deal to be voted on by the European Parliament before it is due to come into force on January 1st. National governments are therefore likely to choose to apply it provisionally – a decision they can take unanimously by written agreement.

Not the answer you're looking for? Browse other questions tagged european-union brexit law trade .

4
What are the regional legislative parliaments in the EU that can veto treaties such as CETA, TTIP, or (later) the Brexit agreement?
4
If a Brexit deal fails, is there a default fallback regarding movement of people?
3
Will member state parliaments have the opportunity to ratify the UK/EU deal before exit day?
8
Open Irish border and WTO's most favoured nation principle
20
Brexit and backstop: would changes require unanimous approval by all EU countries? Does Ireland hold a veto?
0
Why can't UK MPs vote for the Withdrawal Agreement, then renege on the backstop if it comes to that?
20
If the UK government doesn't ask for article 50 extension, can parliament do it instead?
46
Why is the UK still pressing on with Brexit?
1
What are the benefits of joining CPTPP over conducting FTAs with the individual members?
6
The EU-Uk trade deal ratification by national parliaments