I see that Trump is against Section 230. As I understand it, it relieves social media platforms from the liability associated with the content shared by 3rd parties, which I think should enable free speech. But why is then Trump against it, if he's for free speech? Am I either not understanding the law or Trump's position on it?

The controversial part of Section 230 is (c):

(c)Protection for “Good Samaritan” blocking and screening of offensive material

And the associated definitions:

Effectively, what this is saying is that:

This Ars Technica article goes into more detail about where Section 230 came from, some proposed changes, and what the implications of them are.

Let me begin by saying your read of the situation is correct, and there is no plausible way that repealing Section 230 would lead to an increase in free speech on the Internet. Other answers have given good explanations of why that is, but your explanation is basically correct: increasing liability for user content will lead Internet companies to censor more user content. That's basic economics. Indeed, liberals who support Section 230 repeal like Beto O'Rourke and Joe Biden do so because they support an increase in social media censorship of speech they don't like, specifically hate speech and election misinformation respectively.

But why is then Trump against it, if he's for free speech? Am I either not understanding the law or Trump's position on it?

There is a third possible option here, namely that Trump's public position is not built on actual principle at all.

Section 230 has existed for decades, the repeal movement for a few years, but Trump's crusade against it began on a very specific date, May 28, 2020, when he issued an "Executive Order on Preventing Online Censorship." The following day, he sent his first ever anti-Section 230 tweets. 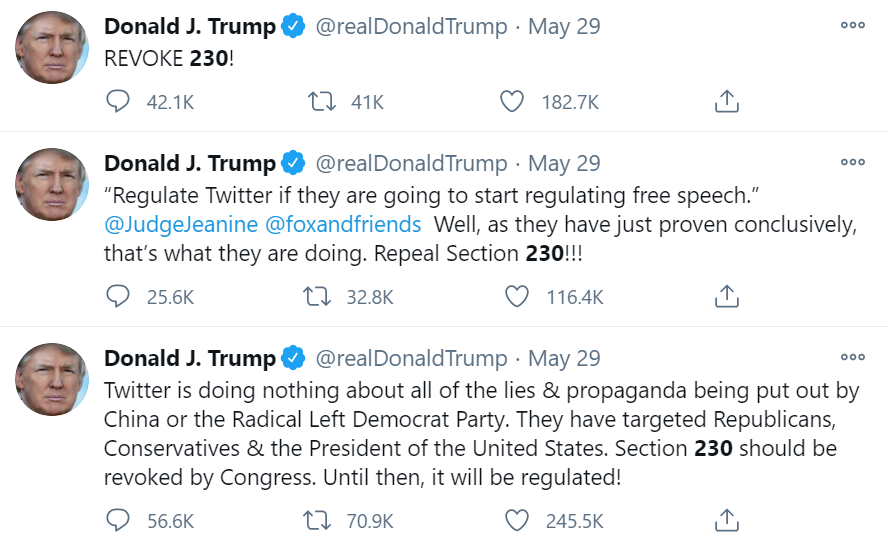 Two days earlier, May 26, marked the first time that Twitter had slapped a disclaimer on a Trump tweet. 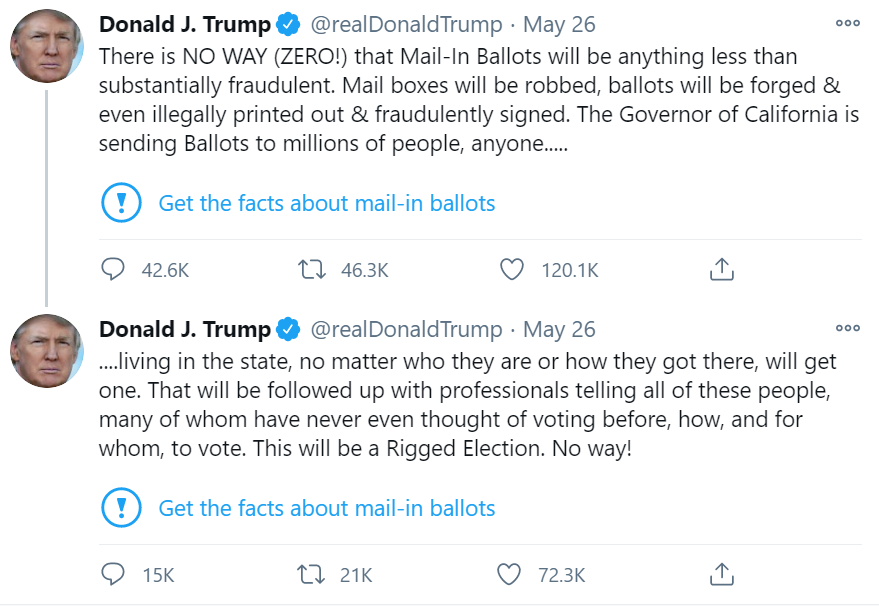 The White House executive order was pretty explicit that the order was being issued in response to Twitter's actions:

Twitter now selectively decides to place a warning label on certain tweets in a manner that clearly reflects political bias. As has been reported, Twitter seems never to have placed such a label on another politician’s tweet. As recently as last week, Representative Adam Schiff was continuing to mislead his followers by peddling the long-disproved Russian Collusion Hoax, and Twitter did not flag those tweets. Unsurprisingly, its officer in charge of so-called ‘Site Integrity’ has flaunted his political bias in his own tweets.

So if it seems to you through a plain reading of Section 230 that the actual effect of its repeal would be to stifle speech at great cost to Twitter, or to force Twitter to shutter completely... consider that might be the point?

There are several different things going on here. Let's start by going through the text of section 230:

Section 230 doesn't unconditionally protect internet companies from liability, it only does so if they are platforms, not publishers. By deleting posts, adding disclaimers and fact-check warnings, and banning users for legal speech, they are acting like publishers, not platforms.

Not the answer you're looking for? Browse other questions tagged united-states donald-trump regulation internet social-media .

7
Is Section 215 of the Patriot Act still in effect?
1
What fossil fuel regulations does President-elect Trump pledge to scrap?
6
How does Section 230 of the Communications Decency Act shield companies from liability of bias?
1
Did Sondland confirm that he asked or suggested that Yovanovitch should start tweeting in support of Trump?
36
What retaliatory actions could Trump take against Twitter?
27
Today, 6 Jan 2021, Twitter deleted three tweets by Donald Trump. What did they say?