The discussion on gun ownership is often heated and detached from facts.

What does science say on correlation and more importantly on causality between gun prevalence and homicide rates?

There are academic studies that can be easily googled but they often contradict each other and many times their plausibility is questionable.

Can you help me form more informed opinion?

There were absolutely no articles, blogs, or studies that I could find that suggested causation at all. Below is a list of articles that attempt to prove or disprove correlation.

This blog post attempts to show correlation, if any, on a scatter plot between gun ownership and murder / crime rates.

It has the following data for all 50 states (except Florida, which does not submit the data for some reason):

The following are the scatter plots that he generated, which (in the author's analysis and findings) show no statistical correlation between gun ownership and firearm murder or crime rate.

The original source for the article is another blog post that can be found here.

Looking at US data, another blogger did scatter plot analysis using source data from the About.com US Liberal Politics page and the Gun violence in the United States Wikipedia page. He concludes that:

His graphs are shown here: 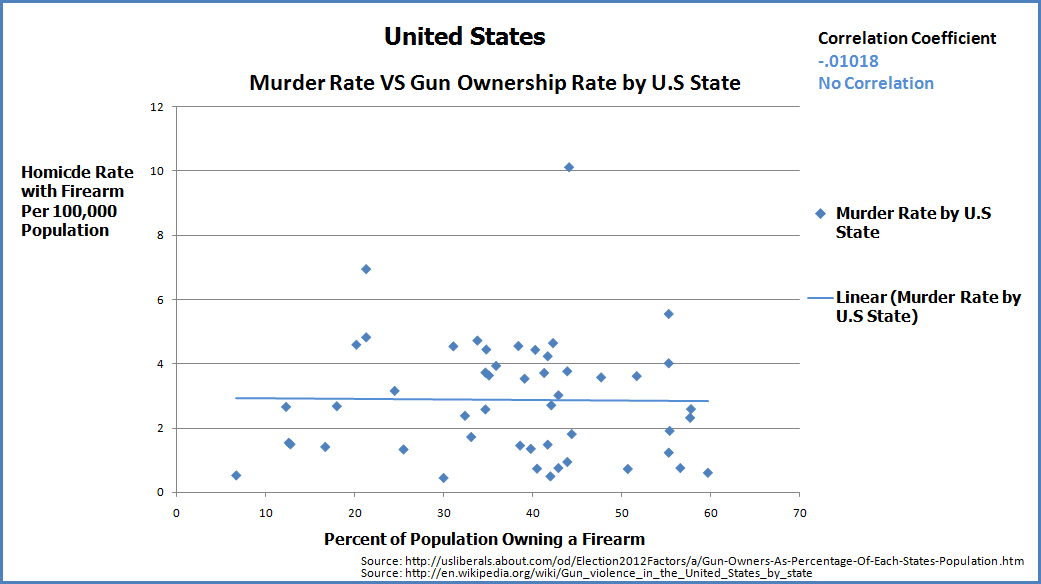 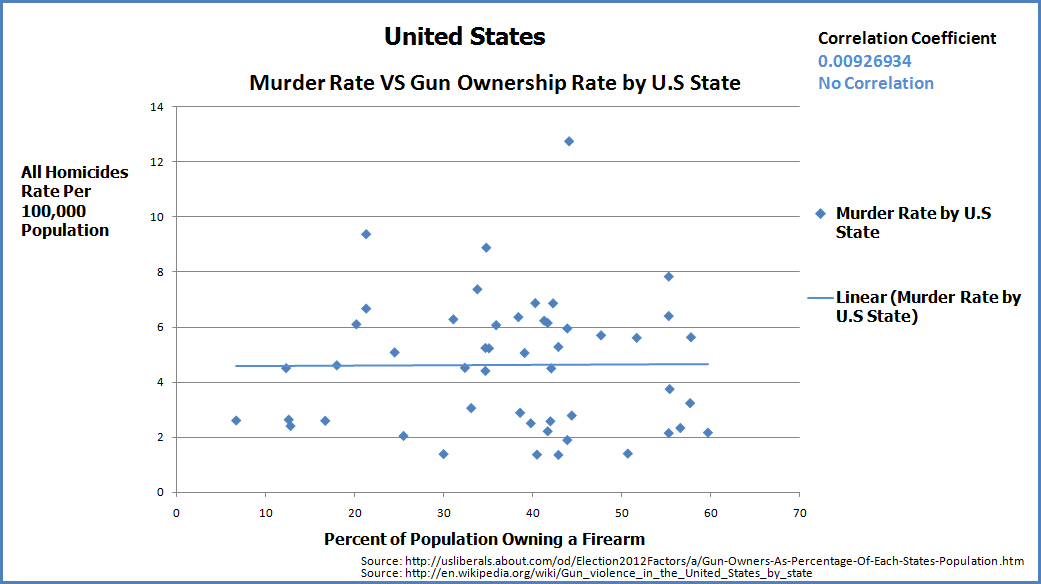 If all countries are included in the plot, there is a negative correlation between gun ownership and rate of homicide. Only when the plot is limited to OECD countries (with the outliers of US and Mexico included), does a very small positive correlation appear.

Because of the many uncontrolled variables involved in comparisons between countries, I don’t believe such statistics can help the case for or against gun control. I’m posting them here to counter the claims by advocates of increased governmental gun control that the statistics legitimise their preference.

A separate study entitled Would Banning Firearms Reduce Murder and Suicide? A Review of International and Some Domestic Evidence done by Don B. Kates (an American Criminologist and Attorney) and Gary Mauser (a Canadian Criminologist), was published in Volume 30, Number 2 of the Harvard Journal of Law & Public Policy (pp. 649-694). The authors in this article found that there is no correlation between gun ownership and murder.

Another book entitled More Guns, Less Crime, written by John Lott, studies crime data for every county in the United States during 29 years from 1977 to 2005 and finds no correlation between gun ownership and murder and concludes that allowing concealed handguns decreases violent crime rates.

The wikipedia page (linked to above) for the book has a slew of papers that argue for and against his conclusions.

The Statistics section of the Gun Politics Wikipedia page references a slew of reports, studies, and anecdotes against gun control.

There are several sites that display or visualize data, but whose authors don't make any claims or assessments on correlation or causality whatsoever. The Guardian published data in an article entitled Gun homicies and gun ownership listed by country that can be downloaded an analyzed. They also have an interactive heat map that displays the following data:

This is a screenshot of the heatmap: 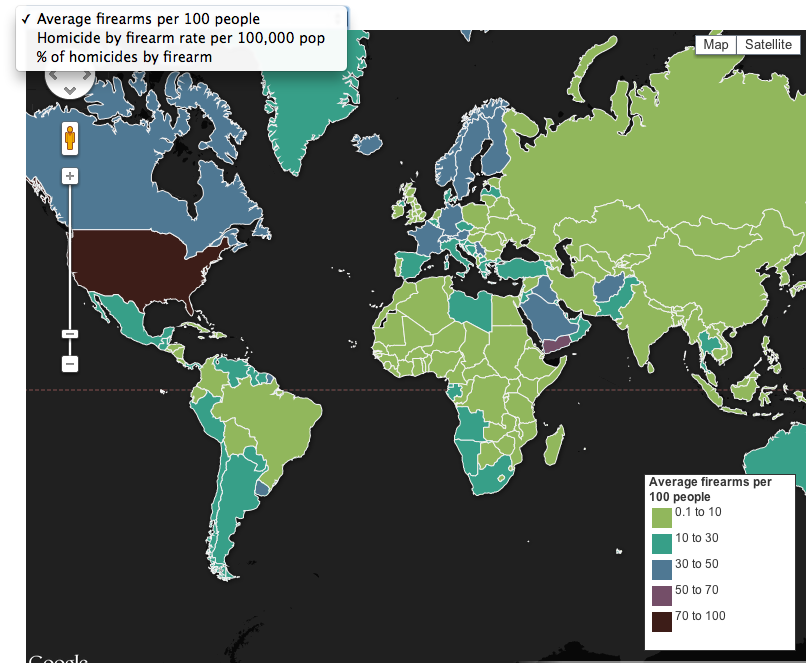 I took a (very) shallow dive into the data, looking at a 3-4 countries from each continent and there doesn't seem to be much correlation between ownership rates and murder rates. One commenter on the article makes an interesting point that we can't use the univariate solution of Gun Control to solve a multivariate problem of murder. He says:

On the other side of the debate, the article entitled Rates of Household Firearm Ownership and Homicide Across US Regions and States, 1988–1997 concludes as follows:

Although our study cannot determine causation, we found that in areas where household firearm ownership rates were higher, a disproportionately large number of people died from homicide.

FactCheck.org reviewed studies in 2008 and posted Violent Crimes and Handgun Ownership. They looked at a study by David Hemenway (director of the Harvard Injury Control Research Center and the Harvard Youth Violence Prevention Center), who reviewed commonly cited research from peer-reviewed journals. From the FactCheck.org article:

It found that studies of the United States or U.S. cities, states and regions "generally find a statistically significant gun prevalence-homicide association." The report said that the evidence from such "U.S. cross-sectional studies is quite consistent … where there are higher levels of gun prevalence, homicide rates are substantially higher, primarily due to higher firearm homicide rates."

With regard to a causal relationship, FactCheck.org says:

That’s not to say that taking the guns away from such areas would necessarily lead to a reduction in the murder rate. Such studies have shown a statistically significant relationship between guns and murder but not a causal one.

Disclaimer: I haven't personally reviewed the original sources or the analysis behind the sources I'm referencing. I'm not making an argument, one way or the other, as to whether or not I agree with the findings in these articles. I posted these because I think the format and nature of the findings in are specifically relevant to the original question.

It appears that there have not been many (or any) peer reviewed studies that show a causal relationship between gun ownership and violent crime. There have been studies that show a statistically significant relationship, but causality as you know is a much higher burden to prove. There is a good discussion of the entire topic in scientific terms at this link.

In summation, it appears that higher gun ownership does imply higher rates of violent crime, but causation cannot be shown in the data available:

That’s not to say that taking the guns away from such areas would necessarily lead to a reduction in the murder rate. Such studies have shown a statistically significant relationship between guns and murder but not a causal one.

You can easily choose which city to examine to make a particular point. For example, if you take New Orleans high crime rates and lack of gun control laws, you can make a case for lack of gun control leading to high crime rates, as this article does, but on the other hand, if you look at the same data points in Chicago, you could make the same argument in reverse, as this article does.

A legitimately objective researcher would find the evidence contradictory. There appears to be more to crime rate than gun control, or the lack thereof.

While statistics can actually show causation, this is only possible if all other variables are controlled. Since most studies only look at existing data, only correlation can generally be demonstrated.

As you see, the answers and comments here also contradict each other. The statistics can be used and misused, it depends who publish them.

Take that article: http://www.landonswan.com/personal/gun-control-vs-murdercrime-rates-a-statistical-look/ which finds no relevant correlation between gun control and violent crime rate. But the problem is, it's based on internal USA statistics only. The author should be asked, how such data could be relevant in any way, because we have only one country that is analyzed. What's the difference what laws are in particular states, taken there's no border control between states?

Another cited article: http://www.guardian.co.uk/news/datablog/2012/jul/22/gun-homicides-ownership-world-list analyzes gun control and crime rate in various countries, but there are much more differences between those countries than gun control only. Having such data set we could try to find correlation between crime rate and language or religion and we could get significat results...

In the paralell discussion https://skeptics.stackexchange.com/questions/976/is-gun-control-effective one of the participants have posted in his comment the link: http://en.wikipedia.org/wiki/List_of_countries_by_firearm-related_death_rate with suggestion to compare Switzerland and Germany, which have similar culture and economic level, and the difference is gun control... But single example can't prove anything.

However, gun control is not 0-1 value. The ban is one thing, the control is the other. This is another factor that should be taken into account. How much arms there are per 100 people - this doesn't tell WHO has this arms, hunters, criminals or maybe collectors.

My personal suggestion: look carefully on the list http://en.wikipedia.org/wiki/List_of_countries_by_firearm-related_death_rate. Look which countries have the lowest crime rate. If you want to reduce violence, you should copy the concepts from those countries, but copying single concept such as gun control is too little, the whole system should be taken into account.

Not the answer you're looking for? Browse other questions tagged guns .

2
What is the distribution of small arms in civil populations?

2
Can a person who had his gun license revoked in one state move to a different state and acquire a new license?
63
Why are gun restrictions based on terror watch list and mental health so controversial in the US?
11
Possible alternative reasons for the high rate of gunfire victims in the United States
4
Treating gun control like types of driver licenses, i.e. Class A, B, C, D, M, and V