Are there countries where the legislative body is not allowed to propose laws that touch upon unrelated subjects?

As a recent example, the recent $2.3 trillion stimulus bill contained not just provisions related to supporting the American people, but also a requirement to produce a report on UFOs:

Federal agencies have been asked to publish a report on unidentified flying objects (UFOs) in less than 180 days, thanks to an act included in the $2.3 trillion stimulus and government spending bill signed by President Donald Trump on Sunday.

A report by the Select Committee on Intelligence attached to the The Intelligence Authorization Act for 2021 states that the Director of National Intelligence, the Secretary of Defense and the heads of other relevant agencies submit a report to the congressional intelligence and armed services committees on "unidentified aerial phenomena (also known as "anomalous aerial vehicles''), including observed airborne objects that have not been identified." They are asked to do this 180 days after the act is enacted.

Are there countries where a proposed law may only focus on one single topic?

Depending on how one defines "one single topic", the rule applies in the UK.

Erskine May - the bible of parliamentary procedure in the UK - has this to say on the scope of a bill:

Any amendment (or new clause or new schedule) proposed to a bill must be within its scope. The scope of a bill represents the reasonable limits of its collective purposes, as defined by its existing clauses and schedules. In particular cases, difficult questions of judgment may arise. The scope of a bill, particularly of a bill with several purposes, may be wider than its long title, although the long title may help to determine the scope.

In other words, a bill's long title is intended to summarise the scope of the bill. Any amendment which is outside that scope is likely to be ruled out of order.

Admittedly, that's not quite the same as saying that a bill must only contain matters pertaining to a single subject; but that is the effect, and so omnibus bills are unknown in the UK (at least nowadays).

Note that this does make riders ("an additional provision added to a bill [...], having little connection with the subject matter of the bill.") all but impossible; and amendments relating to money can only be made by the government.

Riders are forbidden in France, where the constitutional court (conseil constitutionnel) simply nullifies them whenever it reviews a bill. Rules are stricter now than they used to be and the court is enforcing them more aggressively in the hope of making them worthless. Obviously, any process or measure that prevents unrelated amendments to a bill restricts the freedom and independence of the parliament and this one is no exception.

Theoretically, there is a rule regarding this in the Romanian legislation. Article 14 of the Law 24 from 2000 says "an act may include normative regulations regarding other related matter only insofar as they are essential for attaining the desired purpose of this act". However, in practice this rule is often ignored (sometimes, Emergency Government Ordinances contain changes to various unrelated laws).

Greece's constitutional provisions regarding parliamentary procedure forbid the parliamentary discussion of bills containing unrelated topics. Specifically, article 74, paragraph 5 of the Greek Constitution (also available in English) stipulates that a) a law proposal containing provisions not related to its main subject matter shall not be introduced for debate, and b) no addition or amendment shall be introduced for debate if it is not related to the main subject matter of the Bill or law proposal.

In practice these rules are honored in the breach rather than the observance. The Constitution also stipulates that Parliament rules on any disputes related to these rules, and, I guess, this is the loophole used for discussing and passing bills that do not respect them.

The Czech constitutional court has ruled "wild" riders (addendums completely unrelated to orignal purpose of the law) unconstitutional and has nullified some particular cases (court decision in Czech). The reasoning was that riders make the law unpredictable and hard to understand and make it possible that the rules were not discussed thoroughly and in their full context before they are approved in the leigslative body - all of which contradicts the spirit (although AFAIK not letter) of the constitution. So there is AFAIK no explicit law to forbid riders, but you can litigate to get riders nullified and there is precedent for this to happen.

What Accumulation says is not exactly correct (but too long to put this as a mere comment). Many US state laws nominally forbid riders in legislation passed by their regular legislature:

In 1818, a single subject requirement for bills pertaining to government salaries materialized in the Illinois Constitution. [...] By 1959, some version of the rule had been adopted in forty-three states. The provision in the Nebraska Constitution is typical: “No bill shall contain more than one subject, and the subject shall be clearly expressed in the title.”

As this quotation suggests, single subject rules almost universally include a title provision. This [latter] requirement has independent historical roots, making its inaugural appearance in the Georgia Constitution after the 1795 “Yazoo Land Fraud.” Members of the Georgia legislature passed a bill—titled “An Act for the Payment of the late State Troops”—that transferred vast tracts of public land to private companies. Many politicians profited from the act, which was “smuggled through the legislature under an innocent and deceptive title.” Thereafter, General James Jackson demanded that each bill contain a title that adequately expressed its contents, and a provision to that effect was added to the Constitution in 1798. Many other states adopted similar provisions.

And as a historical precedent perhaps:

the Romans in 98 B.C. forbade laws consisting of unrelated provisions.

The paper also discusses the level of enforcement, but that's probably too long to get to here, but I'll throw in this graph, cumulative over all US states: 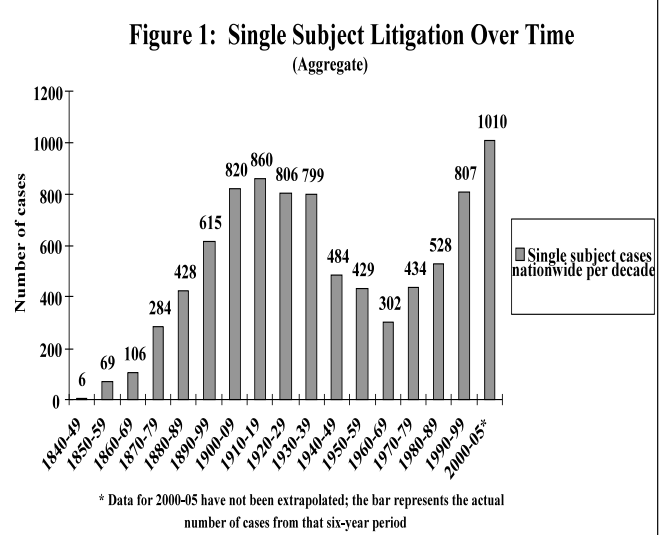 The graph is based on a somewhat crude methodology of counting all invocations of the rule(s) in lawsuits, not even necessarily those where the (state) courts even took them into account in their judgement. And also as a map... 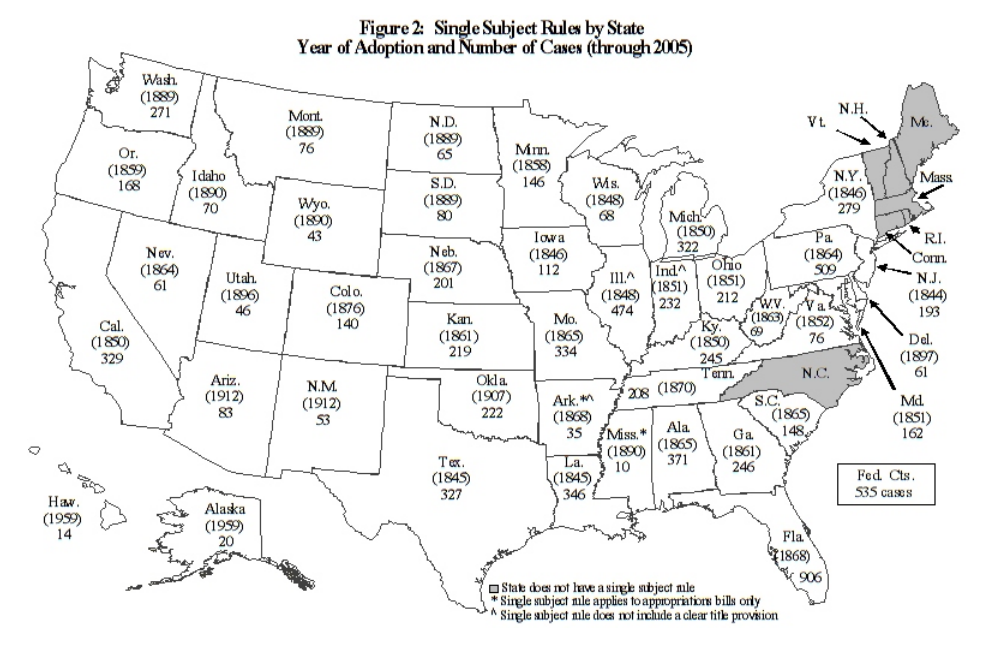 Many states in the U.S. have a single subject rule, however those apply to voter-initiated legislation, not to legislation introduced by the legislature.

Not the answer you're looking for? Browse other questions tagged policy legislation .

3
Can a piece of EU legislation have (unrelated) "riders"?

3
Are there any countries with specific legislation or policy on the rights of strong AI?