Is there evidence that the Mercator Projection map leads to real European colonial tendencies?

The classic Mercator Projection has been around since 1569 as a sailing map. However, in order to represent lines of constant course for sailing vessels as straight lines on the map, the areas around the poles were significantly exaggerated, while the areas around the equator are relatively smaller than they are in reality. As a result, the map accurately represents the shapes of various planetary features (continents, oceans, etc.) but appears proportionally much different than reality.

In an attempt to solve this issue, a different projection, the Gall-Peters Projection, was developed in the 20th century to maintain fidelity of proportion as well. 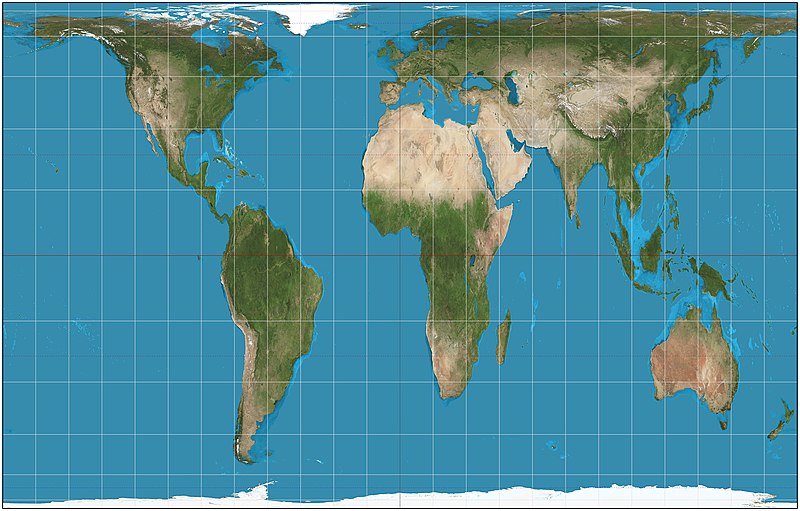 Proponents of the Gall-Peters map suggest that an unintended consequence of the classic Mercator projection is to reinforce European colonial tendencies because it exaggerates the size of western countries like those in Europe and the United States while vastly under-sizing, specifically, the continent of Africa.

Is there any evidence for the assertion that there is a correlation between the prevalence of the Mercator projection and the strength of European colonial tendencies? Is the claim statistically significant and if so, has there been any country that has sought to adopt the Gall-Peters Projection for official use (specifically in education)?

This fakeroversy was popularized most recently by a fictional organization, the Organization of Cartographers for Social Equality in the West Wing.

Yes, it is clear that the prevalence of Mercator projections is directly related to the strength of European colonial tendencies. Ships were the dominant form of transportation at the time, and Mercator projections have advantages over a Gall-Peter's projection in that a straight line drawn on the map charts a constant course/bearing. The Gall-Peters projection has other shortcomings that make it less desireable.

Bob Abramms of ODT, Inc., a publisher of the Peters map, recently wrote an article advocating the map in the National Council for Geographic Education's (NCGE) publication, Perspective.

"The problem of misinformed and overzealous Peters projection fans has been a long-standing one. In fact, the problems seems to have originated with map creator Dr. Arno Peters himself. [...] The Peters projection is of limited value, if taken in isolation. However, it is a rich learning tool when taken in combination with other projections."

This article resulted in a response to the editor of Perspective that was published in the following issue. Dr. Thomas Feldman succinctly summarized the opposition to the Peters projection.

Please, let's use this map as an example of what it is -- a scam capitalizing on the cartographic ignorance of most people and, sad to say, many teachers at all levels, and which survives quite nicely in a climate of political correctness where it is inappropriate to criticize anyone who claims to criticize the "the status quo"... I'm afraid that keeping the debate alive only confuses the ignorant --- they've been led to believe they know what "racist" maps look like because some teachers keep comparing a Mercator to a Gall-Peters in an inappropriate and misleading racial context.

No schools are adopting a Gall-Peters projection map, because it isn't a good map for a world atlas. My grade school had a Winkel tripel projection, with Azimuthal projections of the distorted polar regions. Then there is the more recent Robinson Projection, adopted by the National Geographic Society. All projections have distortions of some sort, because they are trying to make a spherical object to a plane. To avoid all distortions, there is a mapping technique that has been around for ages, and is found in classrooms regularly...its called a globe.

The difficulty in achieving any statistically relevant study is that you only have one data point - namely the expansion of all colonial empires correlated with the time period of the Mercator projection. Thus, strictly speaking, you only have one degree of freedom in terms of data, constraining you to one exogenous variable. That is simply insufficient to construct any type of model that has any residual explanatory power.

Prior to the Mercator projection, you only had Ptolemy's Maps which were based on star sightings, and were accurate as far as latitude was concerned, but not longitude. As such, there was no scientifically rigorous way of approximating land area in visual form. For this reason, after Herschel's clock enabled longitude to be reckoned with precision for the first time, the King of France could decry the loss of 20% of his empire (which had been calculated based on approximations of longitude, rather than reality.) But, to ascribe to Ptomley the propagandistic effect of exaggerating longitude in order to enhance the Kingdom of France would be laughable, not least of the reasons of which are that Ptolemy's purpose was simply to arrange cities north to south and to make a best guess at east west relations.

And, while Ptolemy had Erothanes' best guess as to the measure of the earth, there is not as much evidence that Mercator did, not that he particularly would have cared. Mercator's goal was to make the lives of the sea captians easier.

The fact of the matter with regards to the Peters-Gall Projection, or any other projection for that matter, is that the creators of any map do have a point that a bias is inherent to the visualization. And indeed, Mark Monomer's How to Lie With Maps cites many persuasive pieces of propoganda that have been used throughout the years. But, to attribute a propagandistic motive to Mercator is an accusation after the fact. As pointed out, Mercator's projection allowed for simple dead reckoning by sailors. If it had an unintended propagandistic side effect, that is not documented nor is it statistically testable.

Thus to answer the question directly, yes, in fact, on 100% of the earth's using the Mercator Projection, it is correlated with a group of nations that were colonial empires in nature. And, in 100% of the earth's prior to it, you also had colonial empires, such as Rome, China, the Maya and Aztec, the Indus, etc... Whether or not it is causative, however, lies beyond the realm of statistics to answer, because there is simply an insufficient number of earth's to reproduce the hypothesis.

Not the answer you're looking for? Browse other questions tagged geopolitics .

7
Is there any resource which tracks the accuracy of Stratfor's predictions/forecasts?
6
Is there anything suggesting NATO is just waiting for the winter to end before acting in Crimea?
18
Why do governments still assume that “the more land, the better”?
0
Is there a modern-day political definition of first / second / third worlds which resembles the original most similarly?
46
Is there a strong legal guarantee that the U.S. can give to another country that it won't attack them?