What happens if the Vice-President were to die before presiding over the official electoral college vote count?

I would imagine the President would nominate a new Vice-President, who would have to be approved by the current US Senate. But, what if hypothetically, the Senate (maybe controlled by the party of the president) just stalls on the vice-presidential nomination and the day of the current president's term ends and the new president is to be sworn in swings around?

As you've mentioned, the 12th amendment to the Constitution, enshrined in statute in 3 U.S.C. §15 grants the role of presiding over the counting of the electoral votes in Congress to the President of the Senate, not explicitly the Vice President. As a result, the same provisions apply as would in any other circumstances when the VP is absent or unable to attend; as defined by the Constitution:

The Senate shall chuse their other Officers, and also a President pro tempore, in the Absence of the Vice President, or when he shall exercise the Office of President of the United States.

This would not be without precedent; although an absence, rather than a death. After the 1968 election, Vice President Hubert Humphrey was absent at the counting of the vote. The process was overseen instead by Richard Russell, a Senator from Georgia.

The House of Representatives' website has a nice article on this:

When Congress gathered to count the Electoral College in a Joint Meeting on January 6, 1969, Vice President Humphrey was overseas attending the funeral of Trygve Lie, the United Nation’s first secretary general. In Humphrey’s absence, Senator Richard Russell of Georgia, the president pro tempore of the Senate, oversaw the proceedings. Two mahogany boxes containing the Electoral College certificates from all 50 states and the District of Columbia sat in front of him on the House rostrum. 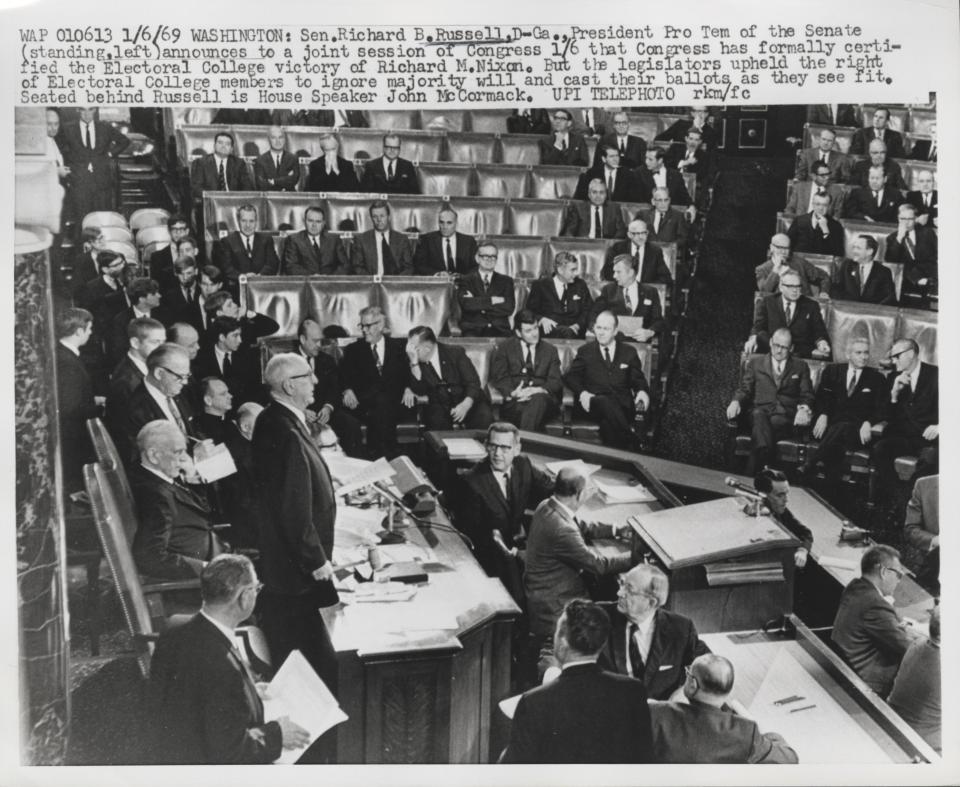 Source: Collection of the U.S. House of Representatives
As President pro tempore of the Senate, Senator Richard Russell announced Richard M. Nixon the winner of the 1968 presidential election, after the House and Senate debated the objection of a North Carolina elector’s vote.

Per the 12th Amendment, it is "The President of the Senate" who is responsible for opening all the electoral vote certificates (but not for actually counting them). That can be the Vice President, or it can be the Senate President Pro Tempore.

Not the answer you're looking for? Browse other questions tagged united-states congress senate electoral-college vice-president .

14
Must the Vice President preside over the counting of the Electoral College votes?