Why was Warnock's election called while Ossoff's wasn't? Aren't they both on the same ballot?

Can someone please clarify?

Furthermore, as Bobson points out in an excellent comment:

There's also some voters who just don't vote in one or the other race, either accidentally or because they don't have a preference. Or cases where one vote wasn't valid for some other reason (not properly marked, voted for both, etc). As of right now, the reported totals are only off by 96, out of 4.4 million total votes.

Races are called before all the votes are counted.

The exact breakpoint at which a race becomes "callable" is slightly subjective. If Emily has 7,999 votes and Fred has 7,001, the the remaining 1,000 votes could technically let Fred win. But the odds of that happening are exceedingly slim (requiring Fred to win every remaining vote), so most media outlets would probably feel safe calling the race for Emily.

Media outlets use known voter patterns and the known results to estimate what the remaining votes are going to be. This allows them to call races before they are technically decided, but leaves them open to error if the remaining votes sufficiently defy expectations. The most famous example of this is probably "Dewey beats Truman", where a newspaper went so far as to publish a newspaper with that headline before learning that Truman had actually overtaken his opponent.

Does this mean that a voter voted for Warnock but not Ossoff?

There was a third race on the Georgia runoff ballot, which, in conjunction with the final (yet still unofficial) numbers, provides a little more clarity: 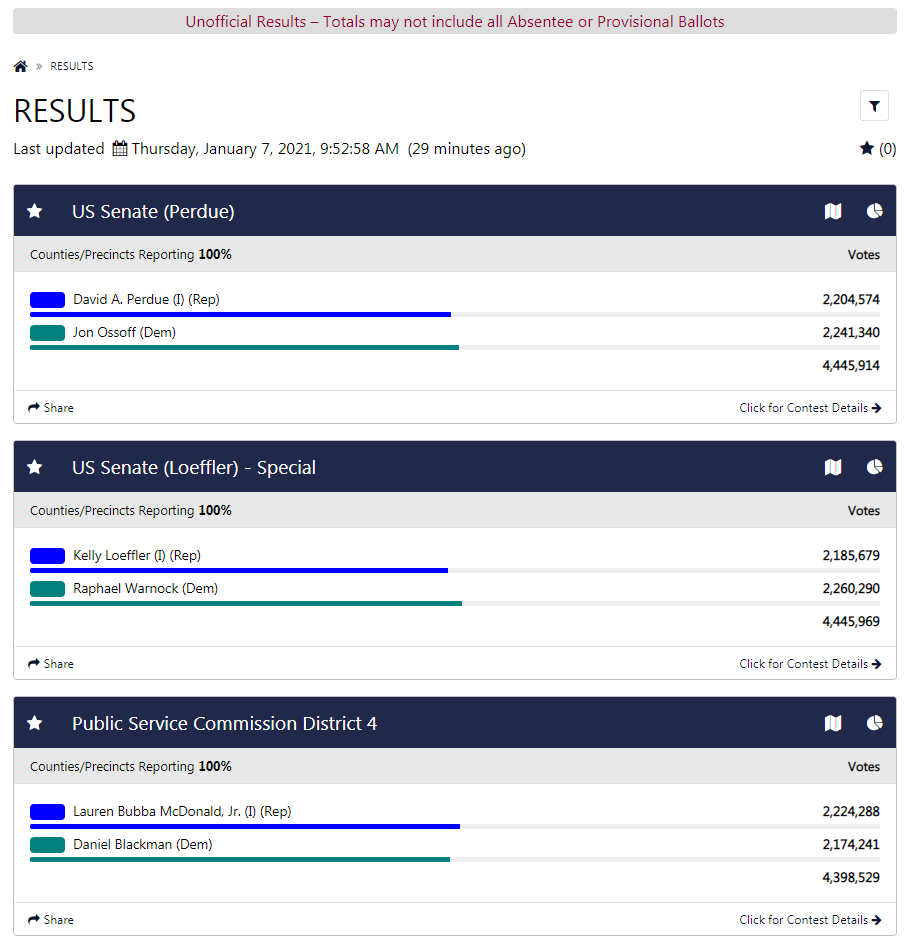 The reason Warnock's race was called before Ossoff's, was simply due to the fact that his lead was slightly larger right from the beginning, and therefore his lead became insurmountable earlier.

Analyzing this data we can see that Ossoff won by approximately 37K votes, whereas Warnock won by approximately 75K votes. (About a 38K differential.) Note that Warnock had 19K more total votes than Ossoff, which lines up mathematically with a 38K differential (because every 1 vote that shifts from Rep to Dem becomes a 2 vote differential.) It appears to be the case that most people voted for both Rep, or both Dem, but it's likely that more than 19K people voted for Warnock (Dem) and also Perdue (Rep). One possible theory for this is that Black Republicans may have been more likely to split their vote in favor of Warnock. One study (from 2014) showed that 12% of Black adults in Georgia identified as Republican.

Of note, is that in the the third race on the ballot, the Republican candidate won. When asked about this in a news conference on Jan 6, 2021, Gabriel Sterling, a top Georgia election official, stated:

It means there’s people who did not vote for Senators Perdue and Loeffler, who did vote for that, which makes me think there’s probably Republicans who chose not to vote for the two incumbent senators.

Arcanist has the right idea, but gives a race that is 100% certain. Let's consider about where we were yesterday morning.

With about 90,000 votes outstanding, Warnock had a lead of about 50,000 votes, while Ossoff had a lead of about 15,000 votes (these are approximate for the sake of argument). Since most of the vote remaining to be counted was in heavily Democratic areas of the state, it was unlikely Loeffler could make up her deficit against Warnock. But Purdue still had a path to overtake Ossoff for much of the day. Ossoff would ultimately win by about 35,000 votes.

The principle most press use is that you have to have a decent chance of picking up enough votes to close the gap. That was why Fox News, and then the Associated Press, called Arizona early for Joe Biden

In making race calls, the AP has been traditionally known for its caution. It is sometimes deliberately slower than other networks, because it likes to say it isn't making projections but, rather, calls based on solid math. Editors at the AP stress that they make a call only when they have determined that a candidate has no remaining path.

As to your other question

Does this mean that a voter voted for Warnock but not Ossoff?

It does indeed appear that way. Current numbers (with 98% shown reporting) show Ossoff up by 35,615, while Warnock is up by 73,404. Vote totals are within 100 votes for both races, so there's no clear undervoting (where someone voted in one race but not the other).

Aren’t they both on the same ballot?

(from the question title)

Indeed they are on the same ballot, i.e. there is just one physical piece of paper on which the two Senate votes are cast. An image of that ballot can be found online (from Pickens County, Georgia; an absentee/provisional/emergency ballot) and is reproduced below. 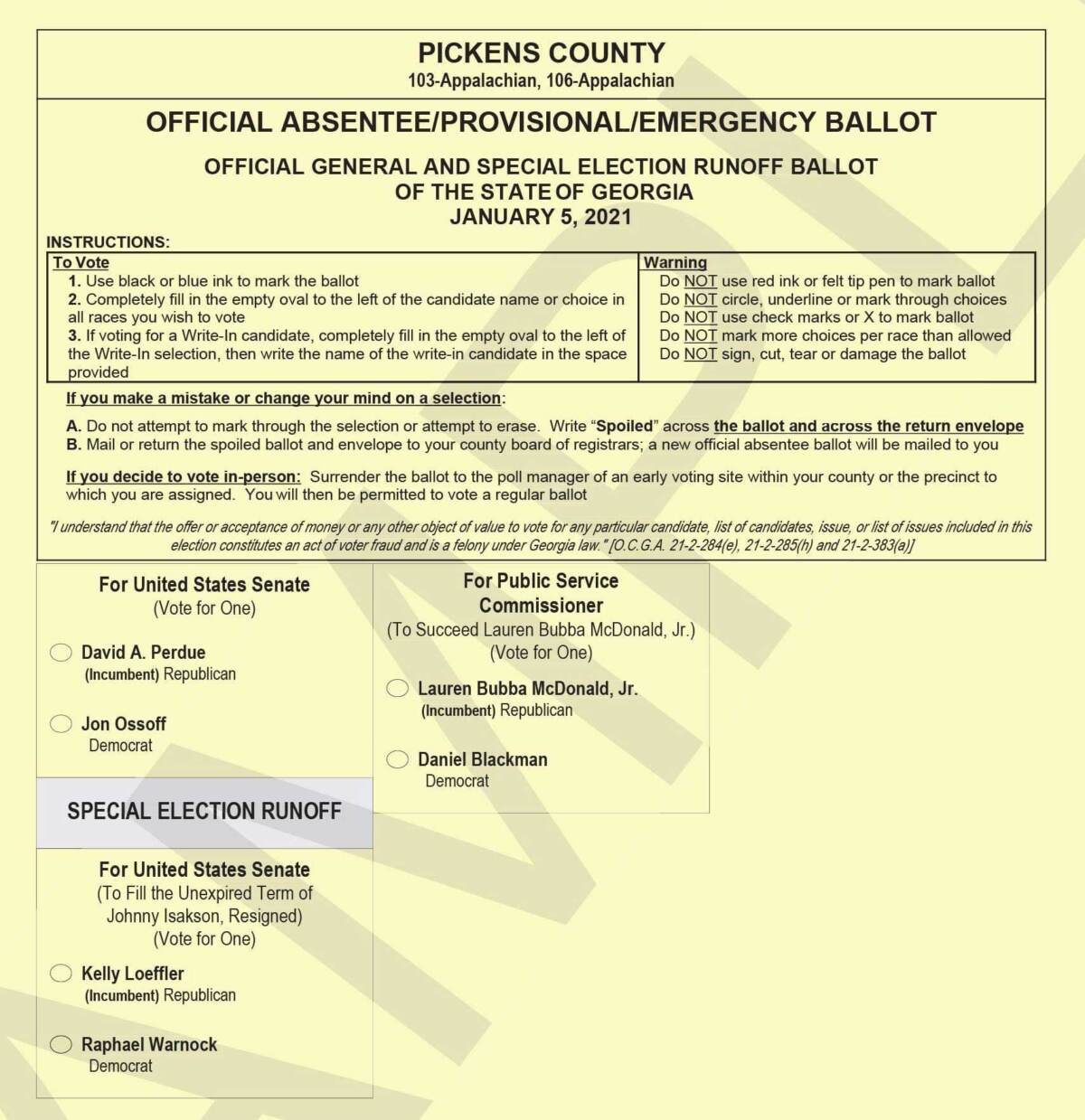 Although these votes are on the same ballot they are in different boxes and thus these boxes can be marked differently. Some voters will have engaged in split-ticket voting by voting for Perdue and Warnock (and some, although fewer, will have voted for Ossoff and Loeffler). There is a third independent race (public service commissioner) which again is to be marked separately so you can probably find all eight mathematically possible variations among the over four million ballots cast in the runoff.

(In addition, the totals show that some voters chose not to vote for public service commissioner – i.e. left that box blank – which means there might even be all 27 ways to fill out the ballot found somewhere in the results if one includes blanks.)

Not the answer you're looking for? Browse other questions tagged united-states election senate georgia .

6
During an election how is it decided whose name is on the ballot
47
Why do oppressive regimes cheat in the election process rather than simply faking the results?
12
Secret ballot vs vote by mail
6
How does a provisional ballot protect vote anonymity?
4
In parliamentary republics, why can't the parliamentary election and the presidential election happen on the same day?
45
What could Trump hope to gain from a *second* Georgia "recount"?
8
Senatorial Class I, II, III races; Special Elections; & Georgia