Whose responsibility is the physical security of the US Capitol?

It will seem, at first glance, like this question has an easy answer; the US Capitol Police. It might be that that's the answer, but I'm not sure whether it goes more in-depth than that. During the events of this evening Trump supporters stormed the Capitol building causing the evacuation of most of the politicians inside and the temporary delay of the counting of the electoral college votes by Congress. In my mind, that's something that ought never to have happened; it's been pretty clear that something along these lines was on the cards for quite some time, and so those agencies responsible for the protection of Congress ought to have been prepared to deal with it. Despite that, the USCP was clearly unprepared for the scale of the problem they were faced with, and they failed to protect the building and the proceedings inside.

Is it the case that the USCP is supposed to be able to handle events of this kind by themselves, and has the equipment and manpower to do so, but they simply failed to bring that into play? Or are they intended only to have the ability to handle regular policing duties and they're meant to call upon some other agency in the event that they're faced with something outside those parameters? If the latter, what is that agency? Whose responsibility would it be to make the request for help? Who, ultimately, would be authorising the approval of that request for help?

The primary responsibility lies with the United States Capitol Police. In most cases they are sufficient to stop simple intruders. In 1998, two members of USCP were killed stopping a gunman

Weston walked through the metal detector, causing the alarm to go off. Chestnut requested he go back through the detector. Weston suddenly produced the gun and without warning, shot Chestnut in the back of the head at point-blank range. At this time, Officer Douglas McMillan, normally working outside the Capitol, was nearby retrieving keys to get a wheelchair for a tourist. As Weston shot Officer Chestnut, Officer McMillan immediately returned fire, causing Weston to shoot toward McMillan, wounding him.

Upon hearing the gunfire, Detective Gibson, who was in plainclothes, told the office staff to hide under their desks. Within seconds, Gibson was shot after the suspect entered DeLay's office. Despite being mortally wounded, Detective Gibson was able to return fire, and wound the suspect hitting him with 4 rounds, severely wounding him and causing him to be apprehended in that office by Officer Vincent Farri and Sergeant John Planchart.

Like any police force, the UCSP is not designed to stop a large surge of intruders (in a near-riot state). The USCP is not terribly large but does have a decent number on their force

Today, the USCP is comprised of more than 2,300 officers and civilian employees

Compare that to the DC Metro police

With approximately 3,800 officers and 600 civilian staff, it is the sixth-largest municipal police department in the United States.

The USCP appears to work closely with the DC Police (which makes sense since their jurisdictions overlap). The main barricades set up to keep protesters back from the building were staffed by both USCP and DCPD (they have different insignias, and USCP were in blue jackets, while DCPD were in fluorescent yellow) Photo below from this AP article 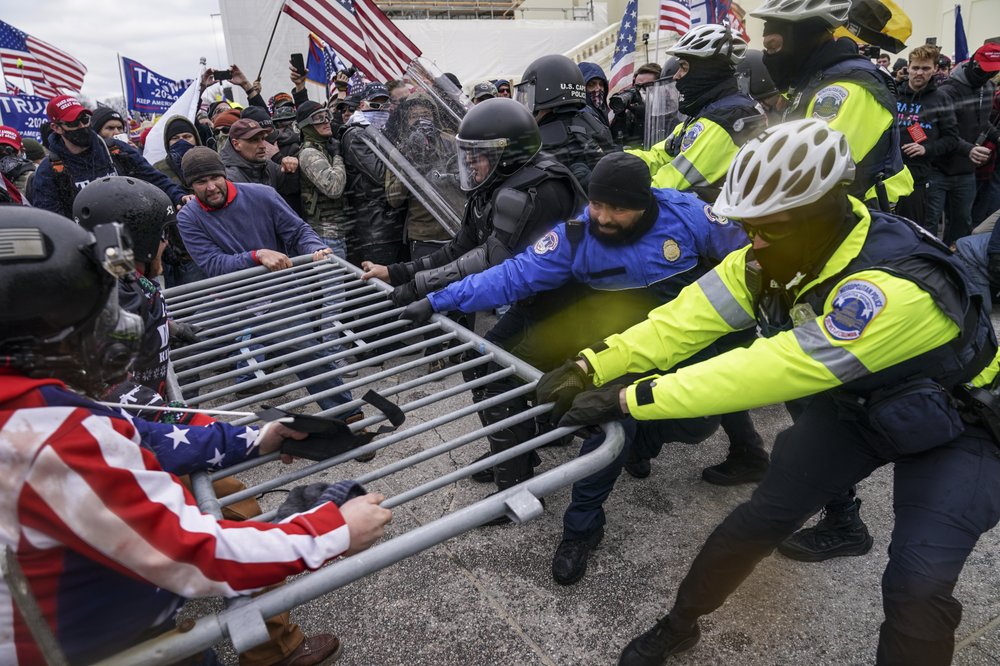 Protesters simply overwhelmed the lines, were able to ascend to the building and broke in, where USCP then confronted protesters with gas and drawn firearms. No members of Congress were harmed. While it remains to be seen if they were ill-prepared on the front lines, the USCP clearly did its job in defending members of Congress once the mob made its way inside (i.e. the second line stopped them).

Decisions about the National Guard have to come from higher up. According to the Department of Defense, it was VP Pence and Congressional Leadership (DC does not have a governor who makes that call)

Chairman Milley and I just spoke separately with the Vice President and with Speaker Pelosi, Leader McConnell, Senator Schumer and Representative Hoyer about the situation at the U.S. Capitol. We have fully activated the D.C. National Guard to assist federal and local law enforcement as they work to peacefully address the situation. We are prepared to provide additional support as necessary and appropriate as requested by local authorities. Our people are sworn to defend the constitution and our democratic form of government and they will act accordingly.

Not the answer you're looking for? Browse other questions tagged united-states congress police .

17
Was the President's authorization to arrest and prosecute those who destroy Federal property still active on January 6th?

4
Is the Department of Homeland Security a federal police force?
2
If the Capitol weren't available, where would Congress hold votes?
2
When did the tradition of Capitol-building-lawn comments start?
2
Has the Office of Professional Responsibility announced an investigation of Barr?
14
Did the FBI inform the US Capitol Police on the level of possible threat on Jan 6?
14
Comparing the summer of 2020's BLM protests to the events at the Capitol on 6th January, 2021
5
Was the timing of the armed response to defend the Capitol within the requirements specified in security protocols?
44
Why is the Capitol Police expanding nationally, when we already have the FBI?
0
Is the current governance of the United States Capitol Police at odds with separation of powers doctrine?
1
Did congress increase the U.S. Capitol Police budget by $2 Billion?