Today, 6 Jan 2021, Twitter deleted three tweets by Donald Trump. What did they say?

What did the three tweets say? 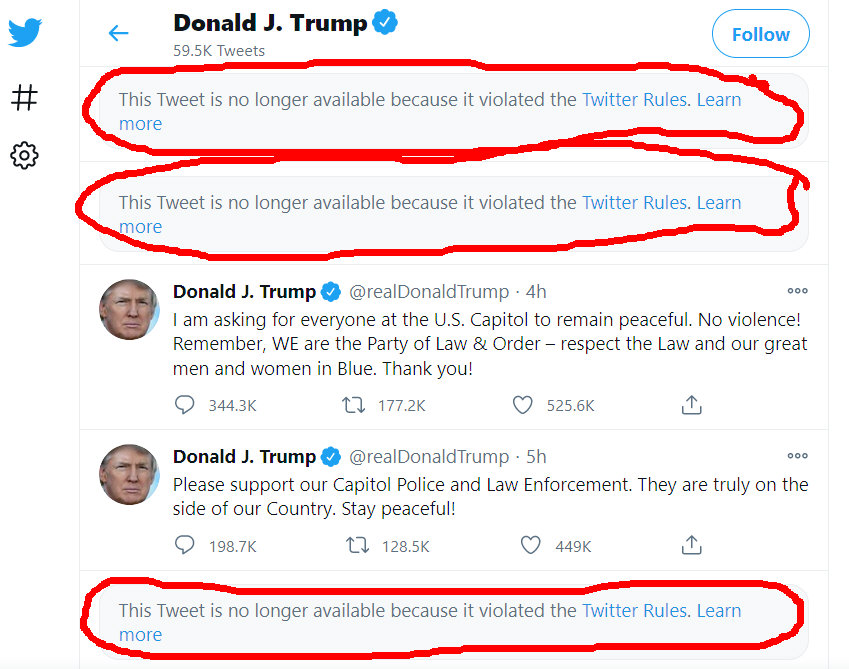 All of Donald Trump's deleted tweets and retweets can be found here on factba.se, which is a site that tracks what Trump and other political figures say or tweet.

You can see screenshots of the original tweets on that site. Here are the transcripts of the regular tweets:

Mike Pence didn't have the courage to do what should have been done to protect our Country and our Constitution, giving States a chance to certify a corrected set of facts, not the fraudulent or inaccurate ones which they were asked to previously certify. USA demands the truth!

These are the things and events that happen when a sacred landlside election victory is so unceremoniously & viciously stripped away from great patriots who have been badly & unfairly treated for so long. Go home with love & in peace. Remember this day forever!

And the transcript of the video he posted:

I know your pain. I know you’re hurt. We had an election that was stolen from us. It was a landslide election, and everyone knows it, especially the other side, but you have to go home now. We have to have peace. We have to have law and order. We have to respect our great people in law and order. We don’t want anybody hurt. It’s a very tough period of time. There’s never been a time like this where such a thing happened, where they could take it away from all of us, from me, from you, from our country. This was a fraudulent election, but we can’t play into the hands of these people. We have to have peace. So go home. We love you. You’re very special. You’ve seen what happens. You see the way others are treated that are so bad and so evil. I know how you feel. But go home and go home at peace.

Twitter's TwitterSafety account stated that they removed these tweets for repeated violations of their policies that went above their usual public-interest policy which allowed other violations to go undeleted. His account is locked until the tweets are deleted, with a minimum 12-hour suspension, and it may be suspended if he continues to break their policies.

12
What exactly did Donald Trump say about abortion?
3
Did Donald Trump support the War in Iraq?
11
Did Donald Trump break any laws by asking James Comey to end the Michael Flynn investigation?
14
What type of corruption did Trump campaign against?
6
Have any of Trump's tweets been filtered out in Germany (under NetzDG)?
2
Has Trump detailed which lockdown measures he thought were "too tough"?
36
What retaliatory actions could Trump take against Twitter?
69
What is the rationale behind Angela Merkel's criticism of Donald Trump's ban on Twitter?