What is the significance of the light blue "ribbon" style lapel pins worn by Cuomo and Schumer?

I saw this photo of NY Gov. Andrew Cuomo and Sen. Chuck Schumer, both of them are wearing the same or similar lapel pins: 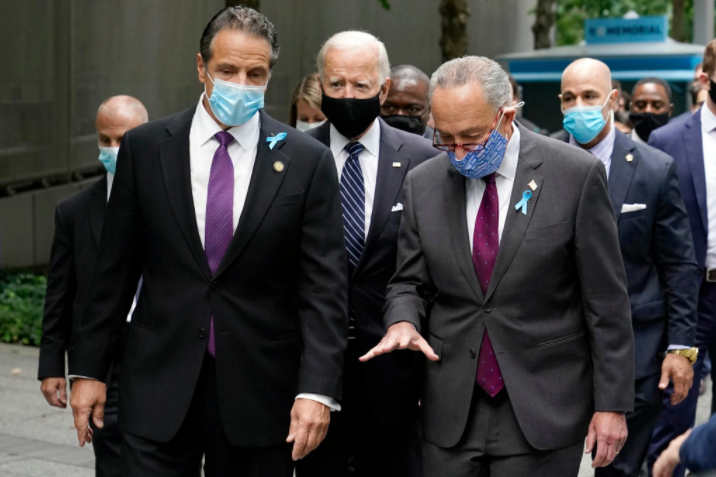 There was no date given for the picture.

The other people visible in the photo don't seem to be wearing these also (including Joe Biden).

Unfortunately searching for "blue ribbon" turns up lots of irrelevant results since that is a common term. I haven't found any reference to what these mean with any searches I can think of. There are some articles about "Cuomo lapel pin" but they are older and not related.

What is the significance of these pins?

This picture is from September 11th, 2020, when Biden, Cuomo, Schumer, and others met at Ground Zero in New York to commemorate the 19th anniversary of the 9/11 attacks. More pictures can be found on Schumer's Twitter post from that day. In these, you can see many other attendees wearing these blue ribbon pins on their lapels.

The blue ribbon represents solidarity with the relatives of the victims of these attacks, and is also worn in memory of the victims themselves. This is supported by this Guardian article from the 2014 anniversary, which notes that many attendees at the annual memorial ceremony wore such pins:

In New York, grieving relatives, many wearing light blue ribbons and carrying pictures of their loved ones, gathered under overcast skies for the annual 9/11 memorial ceremony.
[...]
“I just wanted one year to hear her name said correctly,” said Kirby, who wore the blue ribbon on her lapel. She had lived in New York, but moved to Florida after 9/11. It was her first time visiting the grounds where her sister was killed.

This Daily Mail article from 2015 mentions that Rudy Giuliani is wearing the ribbon "in memory of those who perished".

Not the answer you're looking for? Browse other questions tagged united-states symbols new-york .