Have there been any instances where both of a state's Senate seats flipped to the opposing party in a single election?

The Democratic candidates flipped both of Georgia's Senate seats, previously held by Republicans, in the 2021 runoff elections.

Such a situation where both Senate seats of a state change party in a single election should be rather uncommon since:

So, has this happened before? If so, how many times?

Yes, this has happened five times1.

I modified this list of "double-barrel"2 Senate elections, published by the UVA Center for Politics, to show only the elections where both Senate seats of a state flipped to the opposing party in a single election. 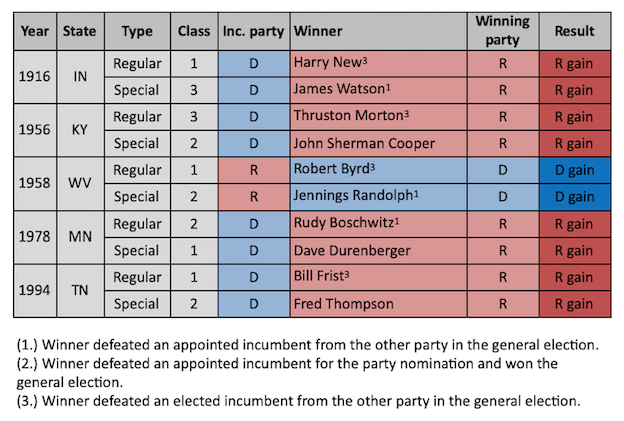 1Includes only elections after 1913 when the Seventeenth Amendment, which established the direct elections of Senators, was passed.

2Occurs when "both a Senate special election and a regularly-scheduled Senate election [are] held on the same day in the same state". (source)

Not the answer you're looking for? Browse other questions tagged united-states election senate history .

11
Does any other governmental body have constituencies similar to Seanad Éireann?
18
What has divided US politics so severely since Bill Clinton's election?
6
Are there any examples of contested elections held to elect a king?
1
Minority politics in the US
11
What would be the effect of a change in the US Senate?
1
Make sense of the NYT Senate totals?
4
Have Republicans or others elaborated concretely why (some) election security bills would be partisan?
6
Can a UK general election be delayed after Parliament is dissolved?
1
Does it make sense for different opposition groups to field one candidate in the two-round system?