Statistics on US political affiliation by industry?

Are there any statistics available on political affiliation/preferences by industry? I got curious when wondering how much the Democrat / Republican split would differ between industries like Primary Industries (farming etc) vs Information Technology.

Yes. This is one of them: 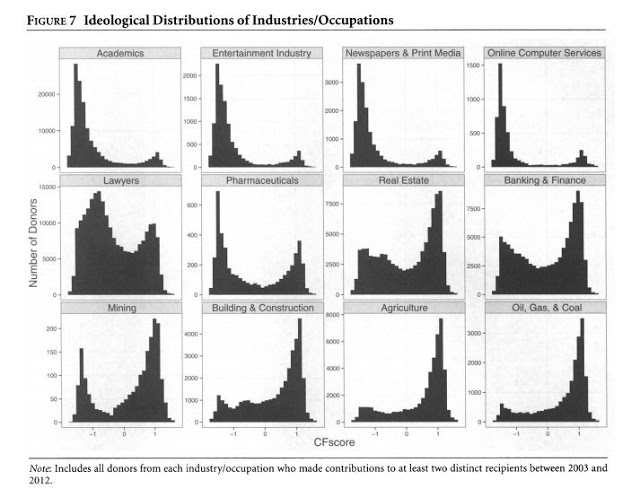 The industries/occupations on the top (academics, entertainment, print media, online computer science) lean left. Those in the middle row and the far left one on the bottom row (lawyers, pharma, real estate, banking and finance, and non-fossil fuel mining) are bimodal with lots of left and right leaning people, and the three of the right side on the bottom row (construction, agriculture and fossil fuels), lean right. Lawyers, bankers and real estate professionals have the most moderates.

Also, military officers lean very strongly right, but enlisted active duty military members are only moderately to the right of what would be expected for their demographics:

[A]bout two-thirds of majors and higher-ranking officers identify as conservative, as previous studies found. But that tilt becomes far less pronounced when you expand the pool of respondents. That is because only 32 percent of the Army’s enlisted soldiers consider themselves conservative, while 23 percent identify as liberal and the remaining 45 percent are self-described moderates. These numbers closely mirror the ideological predilections of the civilian population.

Police unions, unlike almost all other unions, lean strongly in favor of Republicans. 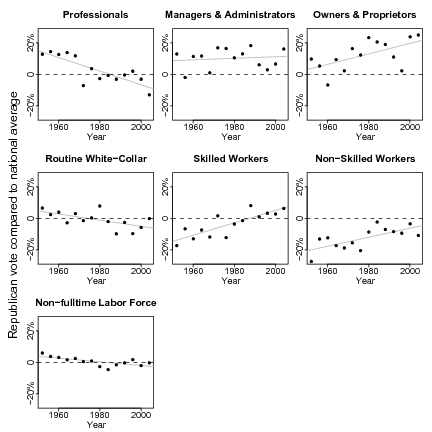 A quick Google search will give plenty of results for the partisan split by occupation:

Academia, technology and entertainment are heavily left-leaning, while agriculture and oil/gas are heavily right-leaning.

Not the answer you're looking for? Browse other questions tagged united-states statistics .

8
Why can't I register with multiple political parties?
15
How do American politicians refer to Palestine?
11
What has divided the country so severely since Bill Clinton's election?
3
Which US states have the most right-wing, “alt-right”, KKK affiliated or neo-nazi groups?
1
How do I get onto a state gubernatorial ballot?
11
How would one prevent political gerrymandering?
4
Are there some statistics on the political affiliation of NESBs?
3
What are the implications of allowing politicization of intelligence services?