Why do non-federations need bicameral parliaments?

Federations often have a bicameral parliament: one house speaks for the nation itself, whereas the other one speaks for the subjects within the federation (it could be summoned by the means of the popular vote, like the U.S. Senate since Amendment XVII of 1912-13, or appointed by subject governments, like the Russian Federal Council).

The state legislature in the U.S. got me thinking: why do non-federations (unitary governments or U.S. states) need the upper house? This was asked on Quora, yet the answers seemed quite shaky. I liked this one:

The point of a bicameral legislature at any level is to have one body that responds quickly to political demands, and another that moves more slowly and carefully. Sometimes what people are screaming for just isn't a good idea. A more deliberative body that doesn't have to face re-election immediately can take a longer term view. -- Louis Cohen.

Yet it seems (to me) that such a system would give rise to in-all-earnest populism during the upper house elections.

So, why do non-federations need the upper house? If Louis Cohen got it right in his answer, am I right to reckon populism to be a standing problem in such a system?

Besides, Nebraska got rid of the upper (well, the lower) House back in 1937. How is this working out for them?

The UK has been a unitary state for much of its history, and its Parliament has had two Houses for most of that time.

The role of the House of Lords is as the quote in the question states. It's not subject to to either the political or electoral pressures of the Commons (given that it's entirely unelected), so it is able to deliberate on matters at length - whether that's scrutinising legislation, or questioning government ministers, or debate matters of interest.

In addition, besides containing many former MPs and ministers, appointees to the House of Lords include a number of experts in their respective fields who are not full-time politicians. They're able to bring specialist knowledge when the House is considering matters within their area of expertise.

One of the arguments against having an elected upper house in the UK is the concern that it would become too similar in nature to the Commons, and that having to be elected would put off people (like experts) who would like to contribute part-time, but who don't want to be full-time legislators.

The UK is no longer a fully-unitary state, and the Scottish Parliament, Welsh Parliament and Northern Ireland Assembly are all unicameral. The UK Parliament can still legislate on any matter for the whole of the UK; but in practise it mostly limits itself to England, or to UK legislation in areas that are not devolved to the regional parliaments.

With a couple of exceptions where bicameral parliaments grew out of tradition (i.e. probably only England), at some point in history a select group of people from a state came together and began drawing up a constitution. This can be initiated from above (the German constitution of 1871) or from members of the public (the West German constitution of 1948). These people will discuss and argue how the political system of the state should be organised; sometimes with certain conditions imposed on them by the current ruler.

It would make little sense for two houses of parliament to be exactly the same, so if this group of deliberators decides to go for (or is asked to go for) a bicameral system, they will usually come up with some way of differentiating the two houses.

In a democratic (or pseudo-democratic) system of government, one of the houses will typically be your standard, fully elected parliament – like the US House of Representatives, the German Bundestag, the French Assemblée Nationale, the Japanese House of Representatives, etc. Unicameral legislatures are typically of this type (e.g. the parliament of Finland or the Riksdag of Sweden).

The differentiating element of the other house can be:

There are likely more possibilities but I don’t have the adequate examples on hand. In addition, as is evident by certain examples appearing in multiple sections these examples need not be mutually exclusive.

Many of the bicameral legislatures were probably created in imitation of the UK Parliament, and of other European parliaments which were formed on similar lines for similar reasons. If you look at the early history of the UK Parliament, the House of Lords (once the Crown Council) was not to be "another [body] that moves more slowly and carefully," although it may have filled that role after the Commons became more powerful. Originally the Lords were the people who controlled much of the military and economic power in the kingdom, the men (and they were all men then) who could provide soldiers and cash and whose opposition could cause a problem for the King. These were the people the King had to keep happy, as a group, to have a successful rule rather than an ongoing civil war. Even further back, they were William I's chief supporters, the men who had helped him to a kingdom in England. Their reward was having a say in how things were run. The Commons were a somewhat later development, a trade of influence for tax money.

Explicit design for a popular house and a slower reacting house that provides continuity and "wisdom" is a creation of the 18-century "Enlightenment" and is in significant part a justification of an already long-established pattern. That is more-or-less the justification of the US Framers, particularly well expounded in The Federalist, which is very much a product of the Enlightenment worldview. How much the US Congress has acted that way over the years could be argued.

There is also the idea that if two houses are chosen in different ways, tending to favor different power sources within a country, that tends to produce compromise rather than civil war. Again, it is not clear that this has usually worked as well as the theorists imagined it would. But it has worked well enough in many places that people have not gone to the effort of changing it.

The simple, additional answer besides "copies of UK", is that more countries have territorial representation than those which are formal federations. An example would be Spain--it has 17 autonomous regions (+2 such cities), but it's not a full-fledged federation. Basically, there's a spectrum of decentralization.

Slightly longer answer, based on one of those sources is that the reasons have been sometimes pegged into 4 categories:

Of course, these categories are not mutually exclusive, and in reality many second chambers play two or more complementary roles (see Table 4.1) 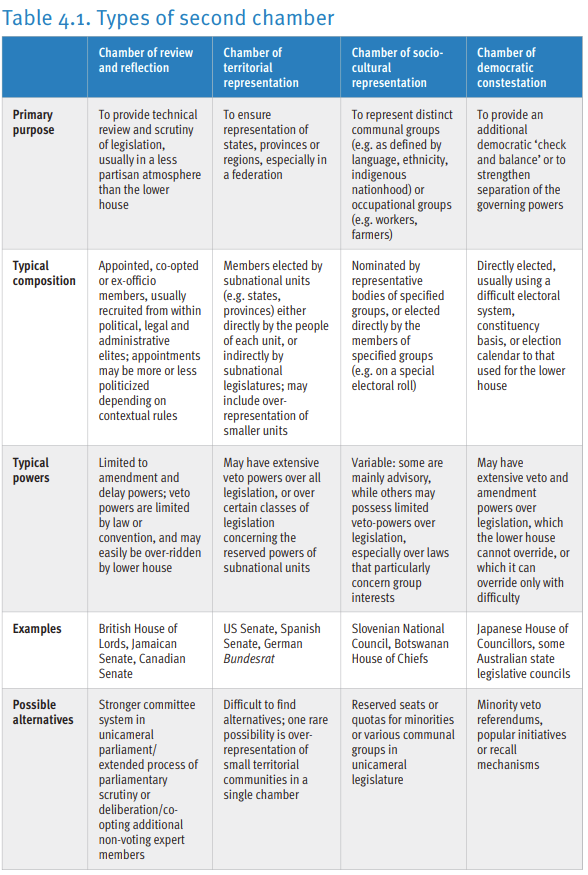 According to that source, there are some countries where the two chambers are practically duplicates of each other though. The example provided there is Romania. Looking through the Wikipedia article of that country's senate, it seems that in older constitutions their senate had seats for clergy etc., which in some sense copied the UK system, but there's no clear reason given why the senate was reconstituted in later times/constitutions. I guess it may have been because Romania has a semi-presidential system fairly inspired from France's which also has a Senate, but France's is elected indirectly, whereas Romania's is directly elected. (Aside: Romania's president has less powers than France's.) So I guess besides "UK copies", there are "France copies" as a tradition-type reason.

Somewhat (but not directly) related, there is actually an interesting paper that proposes that a concept of "semi-parliamentarism" justifies a 2nd chamber; this is defined as:

The core features of semi-parliamentary bicameralism are conditions (2) and (3): even though the upper house is directly elected, it does not participate in the no-confidence procedure.

Defined this way, this system is mutually exclusive with a semi-presidential one, because of condition 1. (The term "semi-parliamentary" term alas has had other definitions.)

According to the author of that paper, a not-strictly-federal country that qualifies for that definition of semi-parliamentarism is Japan.

Because even unitary countries can be seen as federations, most of them are divided in regions and many have strong cultural differences between the regions.

The majority of the lower house usually is skewed because most of the population is concentrated in one area of the country, so the upper house or the senate with members elected on a regional basis would act as a counterbalance.

27
What is gerrymandering called if it's not the result of redrawing districts?

7
Are there any parliaments with more than two chambers?
8
Is it possible for a federated state to be a member of two federations?
2
Why robert's rules need a second?
2
Why does a federation need so many laws?
11
Why are US state (as opposed to federal) legislatures bicameral?
1
Why do some states in India have a unicameral legislature and some have a Bicameral one?
8
Parliament Cannot Bind Future Parliaments
4
Why do we need the Rajya Sabha?
6
Why does the Govt. of Maharashtra not use Moḍi as the official script of the Maraṭhi Language?