What prevents a government from taxing its citizens living abroad?

South Africa recently introduced new legislation that means many citizens working abroad that were previously exempt from paying income tax are now required to do so. It is also common knowledge that citizens of the United States are required to pay tax to the US government even if they do not live or work in the US.

Many countries have a huge diaspora due to bad governance, discrimination against specific ethnic groups or general corruption. The members of the diaspora would typically be seen as being hostile towards the government, so implementing policies that disaffect them would not be a problem for said government. Many of the diaspora would also reside in countries that have tenuous, even hostile, relationships with the home country.

So what prevents this government from suddenly claiming income tax from these citizens? They would increase their coffers at little expense, disaffect a part of their population that they don't care much about anyway (this may even improve their standing with their remaining electorate), and as a bonus redirect valuable capital from another country into their own coffers. Even if only a fraction of the diaspora comply with the law in order to maintain their good legal standing at home, it would still seem to be a profitable strategy.

Why do we not see this happening more often?

What prevents this in general is the practical ability to collect. The US can collect on its citizens living abroad in part because (even foreign) banks really don't want to end up on the bad side of the US government, so they try to obey FATCA (Foreign Account Tax Compliance Act).

Few foreign banks would probably give a hoot if the Iranian government imposes some sanctions on them.

Furthermore, in an extreme case, the host country could pass legislation or regulations that practically nullify such foreign tax claims, although I'm not aware of specific instances (there might be some related to wars).

There are two main issues:

The first point can be simple if the other country maintains complete employment records and shares them with the government that wants to tax that employment. In practice, this raises a number of questions:

As for the second point, enforcement is really hard. Unless these citizens are willing to pay the tax or they have some assets in their home country, it's hard to compel them to pay.

Looking at practical examples, it might push them to renounce their citizenship altogether, assuming they have the luxury of taking or already having citizenship in another country. That's what UK PM Boris Johnson did, presumably to avoid paying US tax on the sale of his UK home. According to the Guardian:

Boris Johnson has renounced his US citizenship, ending years of ambiguous loyalties and probably ridding himself of a hefty tax bill.

A list released by the US Treasury department showed the UK foreign secretary was one of 5,411 individuals to renounce his American citizenship in 2016.

In 2014 he publicly said that the US was trying to hit him for tax on the sale of his home in Islington, north London, something he said he regarded as “absolutely outrageous”, although he later reportedly paid the demand. The US tax authorities have been mounting a campaign to crack down on the earnings of dual nationals.

Another US tax even applies to non-resident non-citizens, the estate tax. As CNBC reported in 2015:

Under U.S. tax law, the estates of foreign holders of U.S. assets, such as stocks, real estate, or valuables, are required to pay estate taxes on those assets after the death of the owner. There’s even a handy piece of IRS paperwork — form 706-NA — to help calculate the tax.

But one veteran Swiss banker tells CNBC that this rule is widely ignored around the world, and the U.S. government has no way to know how much money it is owed under its own laws.

The result, the banker said, is that the U.S. Treasury is likely being deprived of billions of dollars each year.

Even an advanced tax collection agency like the IRS has not gotten around to overcoming these two issues in collecting the estate tax. As the CNBC article continues:

Exactly how much money foreigners owe in U.S. estate taxes each year is unclear — it appears to be a blind spot for the IRS. The tax-gathering agency publishes a detailed report every several years on what it calls the “tax gap,” or the difference between what taxpayers should pay and what they actually cough up to Uncle Sam. But the report doesn’t attempt to estimate overseas estate taxes.

“There’s no estimate for international noncompliance,” said an IRS official. “That’s kind of the 800-pound gorilla that’s not in the room.”

A back-of-the-envelope analysis by CNBC of estate tax payment patterns and total foreign holdings of U.S. stocks and real estate concluded that the IRS is missing several billion dollars in foreign estate taxes each year — money that could help a cash-strapped U.S. Treasury pay the nation’s bills.

The main issues are the unjust burden of double taxation and international relations.

Double taxation could be solved by asking to provide evidence of the taxes paid locally, but it would still add a burden in the form of extra bureaucracy.

By international relations I mean that taxing expatriated citizens means collecting taxes from the economy of another country. The US can interfere in the economies of other countries due to its power, but I don't know how South Africa's decision will be taken. I assume that the move was prepared with a lot of private talks in the diplomatic circles. At least there must have been the undeclared assent of the UK, the US and Australia where most of the of the diaspora moved.

Another point that may discourage other countries with a huge diaspora from adopting the same approach is the fact that remittances usually are a big source of foreign money for many of them. So, such a move might backfire.

The other answers already make some good points. However I want to add something. I think some of your assumptions are not correct in some important cases.

For example a big part of the Turkish diaspora in Europe is, despite living outside Turkey, quite nationalistic and fiercely loyal to the current governing party. See for example the photo below of a pro AKP/Erdogan-rally in Cologne (Germany) in July 2016.

So I think the powers that be in a country sometimes have quite some support among the diaspora and don't want antagonize them by imposing taxes on them. 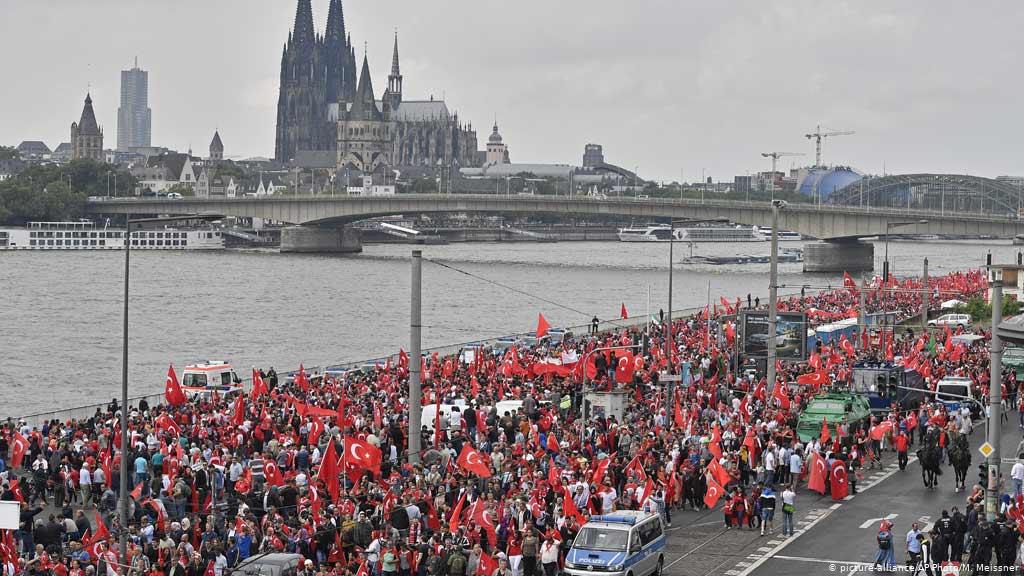 While the other answers put forward various practical reasons, I must note that the current situation is that in principle a country does tax its citizens for their "global income".

Assume for simplicity that your home country is also your tax residence.

Then, bilateral tax-treaties enter the picture, mainly to avoid "double taxation". While they are not carbon-copies of one another, the usual provisions are either a) If you were taxed to the country of earning, your home country will not tax you OR b) You report the foreign income and the tax paid to your home country and your home country may charge you with the difference, if your home country's tax rate is higher than the tax rate of the earning country.

This means that you essentially pay the maximum tax rate -in some cases part to the one country, part to the other. What you don't pay the sum of the two tax rates. This is the meaning of "avoiding double taxation".

Moreover, provisions in these treaties may vary per source of income (from labor, from fixed assets, from royalties, from land, etc).

They wouldn’t raise anything like as much money as you think they would, if they did it like the US does, because of double-taxation treaties. In practice, the US only taxes money earned by its citizens abroad that’s not already been taxed by their country of residence. So, for example, US citizens in the UK are advised not to open tax-exempt ISA accounts, because they’ll have to pay US tax on those accounts since the UK government won’t tax them. But they don’t pay US tax on their UK salaries.

Not the answer you're looking for? Browse other questions tagged taxes international expat .

5
What is the economic argument for taxing sales at the place of purchaser instead of the place of provider?
11
Why is targeted scrutiny from the IRS bad?
9
What would be the economic impact of eliminating all tax deductions in the US?
15
How much will the ObamaCare tax penalty cost?
3
Are US territories getting the same degree of Federal support without paying as much in taxes?
3
What do you call it when everyone gets an equal vote on how taxes are spent?
44
Why does the US require non-resident citizens to file taxes even for non-US income?
17
Why are German local authorities taxing DoD employees, despite the protests of the US and of the German federal government?