During Trump's presidency, did White Americans (on average, still) believe there was more anti-White than anti-Black bias in the US?

An interesting, perhaps, survey on perceptions of racial inequality in the US, conducted some 10 years ago, as (somewhat better) summarized in another paper (of the same authors):

Norton and Sommers (2011) administered a national survey in which Americans reported their beliefs about the extent to which Blacks and Whites are the targets of discrimination. The results revealed that, although both Whites and Blacks agree that anti-Black bias was pervasive in previous eras, the average White American now believes that Whites are more victimized by racial bias than Blacks are.

(The original paper is fairly cited with approx. 600 citations in Google Scholar.)

I'm curious if that result had anything to do with who was president at the time... namely Obama. So, was any similar survey conducted during Trump's presidency? And if there is one, did it have similar or different findings? (Comparing surveys with different wording is potentially problematic; ideally, the same question should be asked in a longitudinal survey. Also, to be most relevant, such a poll should have been conducted before Trump lost the re-election.)

I searched in vain for studies using the same methodology as Norton and Summers. But public polling, which is much more readily available, suggests white Americans currently do not say they face more bias than their black peers.

I'd suggest that the real outlier here is Norton and Summers. They never directly asked respondents whether "Whites are more victimized by racial bias than Blacks are," that was just a widely repeated nugget when they were researching another question. What Norton and Summers sought to prove was whether or not white Americans viewed racism as a zero-sum game, i.e., do white Americans believe that declining bias against black necessarily comes at the cost of increased bias against whites. Accordingly, they first asked respondents to ‘‘indicate how much you think Blacks were/are the victims of discrimination in the United States" for each of the decades from 1950's to 2000's on a scale from 1 to 10. Then, they asked the same question about whites being the victim of discrimination.

They argued yes, whites Americans do view racism as zero-sum. Both white and black Americans tend to believe that anti-black bias has steadily declined across the decades, but white Americans believe the decrease was more dramatic than black Americans do, and that it came with a upswing in anti-white bias. 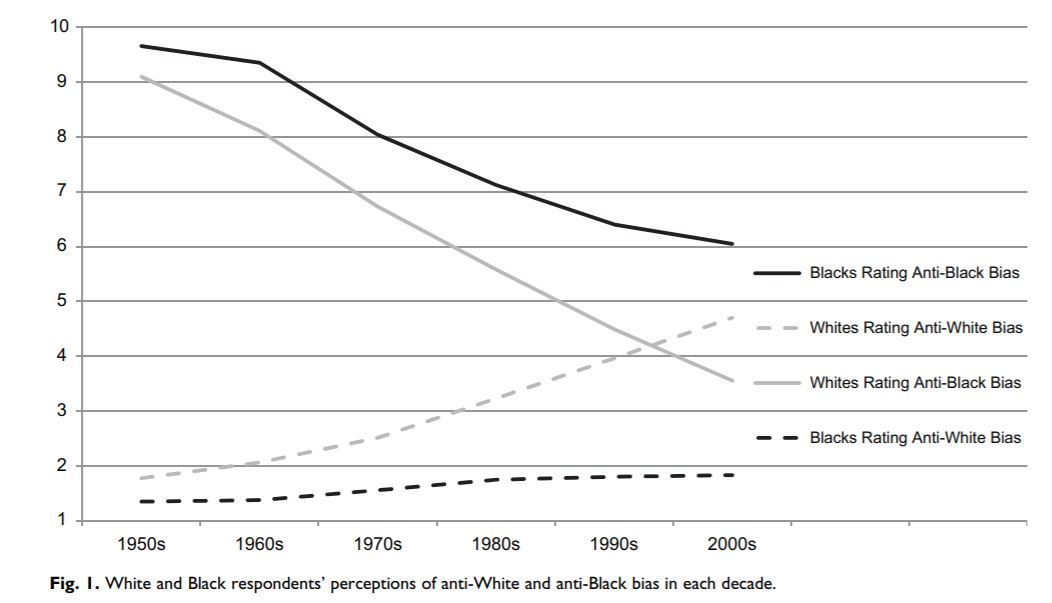 So as you can see, yes, white Americans ended up rating anti-white in the 2000's at around a 4.75 and anti-black bias in the 2000's around 3.5. But the first thing to keep in mind is they were intentionally priming their respondents. They were interested finding out what white Americans would say about anti-white bias after you'd already got them thinking about declines in anti-black bias. In a typical poll, they'd randomize the question order precisely to avoid this kind of bias.

Second, it's not necessarily the case that "the average white American" would rank it this way. Norton and Summers noted that a loud minority of their white respondents, 11%, ranked anti-white bias a 10 (compared to only 2% who said 1). To see why that could skew the results, imagine a data set where 11 white Americans rate the biases 10 and 1, but 89 others rate anti-white bias a 4 and anti-black bias a 5. If you averaged those two groups together, you'd conclude that "on average" white Americans view anti-white bias as worse, rating it 4.66 vs. 4.56. But the reality would be that the vast majority of white Americans don't feel that way. That's an extreme example, but you get the idea.

But the bigger problem with drawing larger conclusions from the study is that the way it was framed, respondents may not have been rating anti-white and anti-black bias relative to each other, but relative to the level of bias in earlier decades. If you asked someone to rate anti-black bias today and then immediately anti-white bias today, you could be pretty sure you have a good idea of which one he views as the bigger issue. But we can't be as confident that if you pulled aside a respondent who said anti-black racism today relative to 1950 was a 4, and then six questions later said anti-white racism relative to 1950 was a 5, he would actually say that blacks face less racism today than whites.

In other words, a problem here is they've asked respondents to track relative change over time, but there's only ten discreet rungs on the ladder, six opportunities to move up or down, and two people moving towards each other. They've set up a system where a white respondent might end up rating white discrimination higher today higher than black discrimination, not because he believes that, but because he believes other, commonly-held beliefs. Such as:

Working from these preconceptions gets at minimum the top man at the 4th rung and the bottom man at the 3rd. From there, it doesn't take much of a push.

I am not a Harvard Business or Tufts professor, but I would say Norton and Sommers very aptly demonstrated how widely held those three views are among white Americans (and not at all widely held among black Americans), but it was a bit of stretch on their part to then compare the final two numbers and conclude "the average White American now believes that Whites are more victimized by racial bias than Blacks are." There's way too many asterisks on that finding.

So I guess to get to the root of the matter, I'm not sure I buy into the premise of the question. I'm skeptical that in 2011, the average white American believed there was more anti-white bias than anti-black bias in the US. If that was the case, yes, it looks like there's evidence public opinion has shifted. But it may be that the study you're relying on is an outlier due to its methodology.

Not the answer you're looking for? Browse other questions tagged united-states donald-trump public-opinion racism barack-obama .