Any data about Trump supporters amount in National Guard? [closed]

Ask Question
Asked 1 month ago
Active 1 month ago
Viewed 187 times
-3
Closed. This question is opinion-based. It is not currently accepting answers.

As we know, now there is about 25000 national guardsmen in Washington DC. But doesn't it increase risk of strikes from the inside, from hidden Trump supporters? More people - seems more risky. And FBI is now checking that forces.

Is there any data about Trump supporters amount in National Guard?

Pre-election support numbers for Trump in the military at large are somewhat easier to get and they seemed to be on par with the rest of the population. That doesn't mean all these Trump supporters in the military would support a coup. 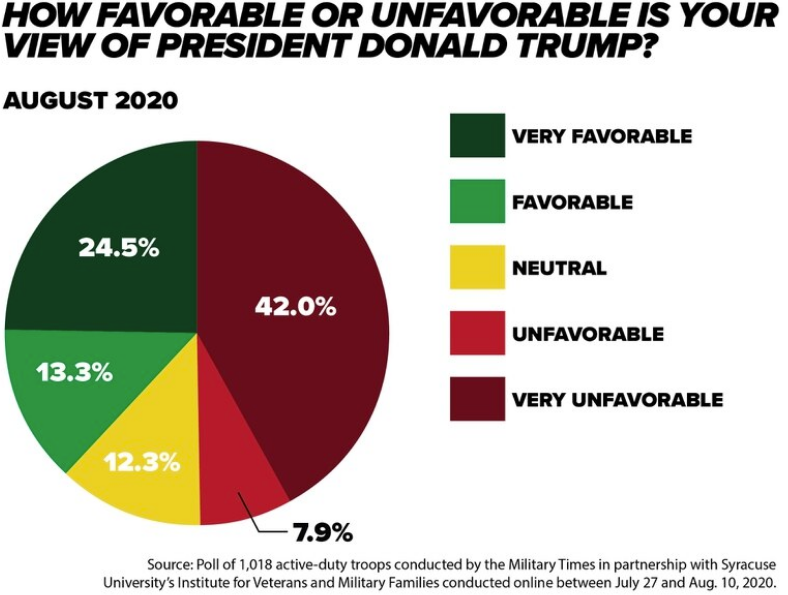 If it's any reasssurance to you in that regard, the armed forces leadership has explictly condemned the riots:

"The violent riot in Washington, D.C. on January 6, 2021 was a direct assault on the U.S. Congress, the Capitol building, and our Constitutional process," wrote the chairman of the Joint Chiefs of Staff, Army Gen. Mark Milley, along with the vice chairman and the heads of the Army, Navy, Air Force, Marine Corps, Space Force and National Guard Bureau. "We mourn the deaths of the two Capitol policemen and others connected to these unprecedented events."

"We witnessed actions inside the Capitol Building that were inconsistent with the rule of law. The rights of freedom of speech and assembly do not give anyone the right to resort to violence, sedition and insurrection," they wrote, according to a copy of the memo obtained by U.S. News. "As Service Members, we must embody the values and ideals of the Nation. We support and defend the Constitution. Any act to disrupt the Constitutional process is not only against our traditions, values and oath; it is against the law."

It's somewhat notable that all these making that statement are career military "top brass", i.e. it's not a statement from the (appointed/acting) Secretary of Defense.

Of course, one can't rule out some kind of extremist elements trying to pull off some kind of Sadat event, but that's why the FBI is investigating.

Not the answer you're looking for? Browse other questions tagged united-states donald-trump military joe-biden inauguration .

5
Is Donald Trump the main reason behind the dramatic increase in Republican primary turnout?
2
Is stopping and searching vessels in Asia-Pacific waters to enforce North-Korean sanctions consistent with the US Coast Guard's mandate?
11
Was any official explanation provided for Trump defending Russia over FBI?
5
Stated reasons why Trump waited until the day after the election to oust Sessions?
4
How much apparel has Trump sold?
3
What criminal referral did Michael Flynn’s lawyer have advance knowledge of?
8
What has been the response in the US to threats of foreign interference in the 2020 presidential election?
16
Why is Trump promoting hydroxychloroquine as a treatment for COVID-19?