What did the Trump White House have as written rules regarding mask wearing on WH premises? 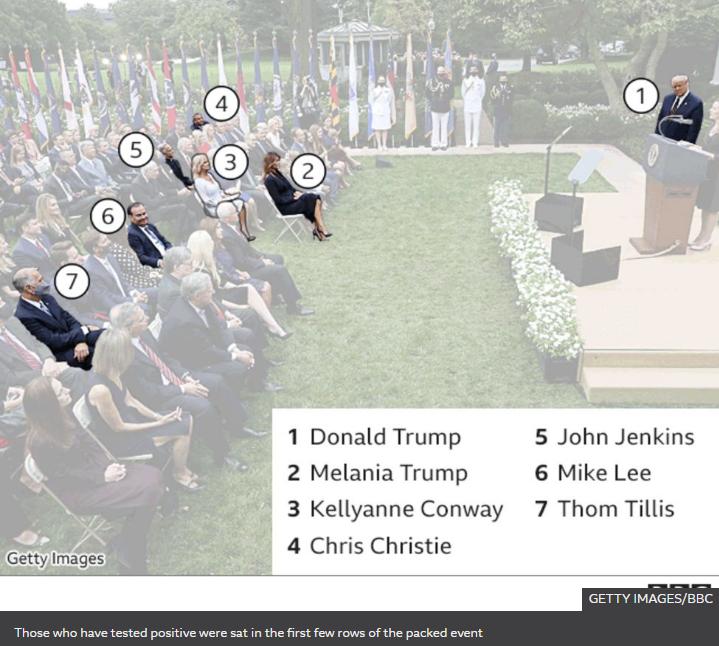 (Source: BBC --more photos therein. That event had been criticized by Fauci as a "superspreader".)

But it's also been said in a comment to another q that mask-wearing rules did cover most White House employees otherwise.

So, what did the Trump White House have as rules (if that's the right word) in writing regarding mask wearing on WH premises?

"We are requiring everyone who enters the West Wing to wear a mask or facial covering," the White House Management Office wrote in a Monday email to staffers.

It appears to be an email sent to staffers in May 2020.

The email does not appear to be publicly available, but the New York Times had obtained a copy of it.

In an internal email obtained by The New York Times, people who work in the cramped quarters around the Oval Office were told that “as an additional layer of protection, we are requiring everyone who enters the West Wing to wear a mask or face covering.”

President Trump noted then that he ordered the change but officials said it did not apply to him or VP Pence.

Asked at a Rose Garden news conference whether he had ordered the change, Mr. Trump — who did not wear a mask and has repeatedly said he sees no reason to — said, “Yeah, I did.” But officials said the new requirement was not expected to apply to Mr. Trump or to Vice President Mike Pence.

Effective immediately, National Security Council staff are required to wear masks in all White House common areas and any place social distancing is not possible, additionally staffers are requested not to visit the West Wing unless it is required, according to a staff memo obtained by CNN. [...]

However, a senior White House official told the Associated Press that mask-wearing would remain a “personal choice” for staffers.

So it looks like the rules may have depended on the area, i.e. only the West Wing was covered by the (May) mask rule for staffers, I guess.

9
What is Ivanka Trump's role in the White House and is it uncommon?
5
What effect did Russia have on Trump winning the Republican primaries?
2
Are there written rules regarding redactions in Congressional documents?
2
Has the White House explained why President Trump connected the NSA data deletion to the Russia investigation?
3
What powers does the Rules Committee (US House of Reps) have?
3
Has the CDC (already) published these mask recommendations that Trump has just revealed?
23
Why did Trump rescind his executive order that barred former White House employees from lobbying the government?
3
As of 2021-01-20, which Federal facilities did not require wearing a mask on premises?
1
UK Health Secretary on Today: I will sometimes use a mask when not required by law. Is he the first minister to announce this choice?