How unusual is a Vice President presiding over their own replacement in the Senate?

Yesterday, new Vice President Kamala Harris presided over the swearing-in of 3 new Senators, including her own replacement. This required her to read a statement which had her own name in it, so she was referring to herself in the 3rd person. She even remarked at the time how weird that felt.

My question is: How weird was that? Harris may represent a lot of firsts in taking the office, first female, first black, first south-Asian VP, but she's hardly the first to have to vacate a Senate seat in order to assume the office. Is it normal for a new VP to preside over the swearing-in of their own replacement in the Senate (or the House for that matter)?

Does it have something to do with the party balance in the Senate? (I know that the 50/50 split is rather unusual.) i.e.: If there were one less or one more Democrat in the Senate, would McConnell or Schumer have taken that role? (In fact since this was the swearing-in ceremony for the new Senators, and Warnock and Ossoff were not technically in office until a few minutes after that, wouldn't the Republicans still be the majority party at that moment?

This is mostly to do with the date of Harris' resignation as Senator. She submitted her letter of resignation to California Governor Gavin Newsom on Jan 18th, two days before being sworn in as VP. Recent Vice Presidents who resigned from their Senate seats did so earlier - with the consequence that their appointed replacement assumed their seat before inauguration day.

The most recent VP who swore in their replacement was Charles Curtis, who resigned as Kansas Senator on March 4th, 1929. His replacement, Henry J. Allen, was appointed by the Governor on April 1st, and took the oath of office on April 15th, administered by now Vice President Curtis. 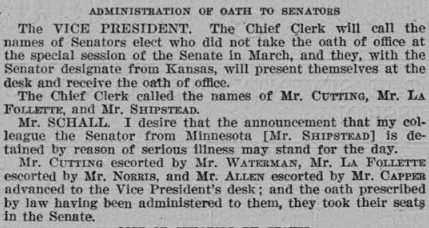 ADMINISTRATION OF OATH TO SENATORS
The VICE PRESIDENT. The Chief Clerk will call the names of Senators elect who did not take the oath of office at the special session of the Senate in March, and they, with the Senator designate from Kansas, will present themselves at the desk and receive the oath of office.
The Chief Clerk called the names of Mr. CUTTING, Mr. LA FOLLETTE, and Mr. SHIPSTEAD.
Mr. SCHALL. I desire that the announcement that my colleague the Senator from Minnesota [Mr. SHIPSTEAD] is detained by reason of serious illness may stand for the day.
Mr. CUTTING escorted by Mr. WATERMAN, Mr. LA FOLLETTE escorted by Mr. NORRIS, and Mr. ALLEN escorted by Mr. CAPPER advanced to the Vice President's desk; and the oath prescribed by law having been administered to them, they took their seats in the Senate.

Below are all the other subsequent Senators who resigned their seats to become Vice President - in each case, their replacement was sworn in before they became VP. Then VP-elect Biden did attend the swearing-in ceremony of Kaufman, but obviously was not eligible to preside.

In conclusion, this is fairly unusual, but only because Senators who are successfully elected to the office of Vice President tend to step down as Senator early enough for their replacement to be sworn in by someone else.

Not the answer you're looking for? Browse other questions tagged united-states senate vice-president kamala-harris .

20
"motion to reconsider is considered made and laid upon the table" & "Madam president... I note the absence of a quorum" What do these mean? Why funny?

9
Did a Vice President ever cast a tie-breaking vote against his own party?
10
Can the Acting President break ties in the Senate?
6
Is the SCOTUS confirmation hearing anything more than a grandstanding opportunity?
8
Why is nobody in the Amy Coney Barrett hearings wearing masks?
17
What happens if the Vice-President were to die before presiding over the official electoral college vote count?
12
Does a vice president retain their tie breaking vote in the Senate during an impeachment trial if it is the vice president being impeached?
4
What was the original purpose of the reading aloud of a bill in the US Senate before voting; were there rules requiring anyone to listen?
8
Can the president of the Senate (Vice president) introduce a bill?