Seal in the "Office of the Former President"

In my country of origin national symbols (like the flag, coat of arms etc...) are protected by law, that is, nobody can use them without permission — for instance, one cannot print a tshirt or a mug with an stylized version of the flag. Nobody respects that law, but the law exists nonetheless.

That being said, I just saw that the "Office of the Former President Donald J. Trump" has what seems to be an official seal: 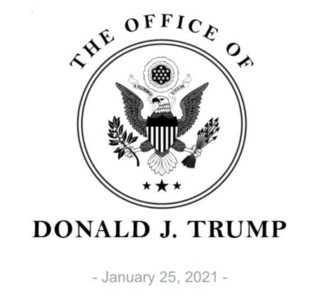 Is that seal official? If it is, are official symbols like that protected by US law? Can Trump use it like he did?

Under that law, it prohibits usage that may be "reasonably calculated to convey, a false impression of sponsorship or approval by the Government of the United States or by any department, agency".

The establishment of the office is customary. The 1958 Former Presidents Act provides taxpayer-funded allowances and office staff to former presidents to help them answer mail, manage speaking requests and handle other informal public duties. The act provides funding for salaries, employment benefits, office space, equipment, supplies and materials, and more.

President Barack Obama also uses the seal in the logo for his post-presidency office.

As is the case for President George W. Bush:

Presidents Jimmy Carter and Bill Clinton don't have logos for their offices as they operate out of the Carter Center and the Clinton Foundation, respectively.

31
If a president is impeached and removed from power, do they lose all benefits usually afforded to presidents when they leave office?

14
How do "originalist" interpreters of the constitution cope with the 2nd amendment?
20
Did Mueller's report provide new evidence for Russian govt interference in 2016 elections?
17
How do Republicans explain their lack of support among minority voters?
4
Has the Trump administration enforced sanctions related to the Skripal poisonings?
6
What is the proper title for a former U.S. President?
13
If a president is removed from office after being impeached, when does the vice president take office?
11
Can a former US President settle in a hostile country?
23
Can a President be impeached after leaving office?