Are police in Western European countries right-wing or left-wing?

In America, the police have a reputation for being politically conservative. One rarely sees clashes between conservative demonstrators and police.

In Europe, though, there seem to be lots of clashes between anti-lockdown (presumably conservative) and (in France) yellow vests movement protestors and police? Is this because police in Western Europe skew left?

Speaking for Germany, officially they are bound to be neutral. Practically, they lean (heavily) right.

Looking at the anti-lockdown protests (which are indeed right to far-right), the police has been very hands-off compared to left-wing demonstrations.

In recent years, many cases of far-right extremist networks inside the police have been discovered (but as of yet no far-left networks).

Scientific analyses have shown that right-wing ideology is not an issue of a individual cases, but a structural problem in the police. Racial profiling is prevalent and right-wing extremism is under-estimated and institutional racism is negatively affecting police work (see e.g. NSU).

For France, the topic has covered been by a fact-checking article of a (left-leaning) newspaper, called Libération, published in 2018.

If you can read French, and if you know who the main figures of the different parties are, you could probably answer that police is most likely conservative there. (Note: blue is usually associated with the right wing parties, and red, with the left wing parties.)

Briefly, the article presents several surveys conducted by well-established agencies or labs, such as IFOP and Cevipof.

The method is quite direct: they asked policemen who they will vote for. The surveys include policemen, but also Gendarmerie, a similar but somewhat distinct force, as well as the military (not related to the question).

Question: How would you position yourself? 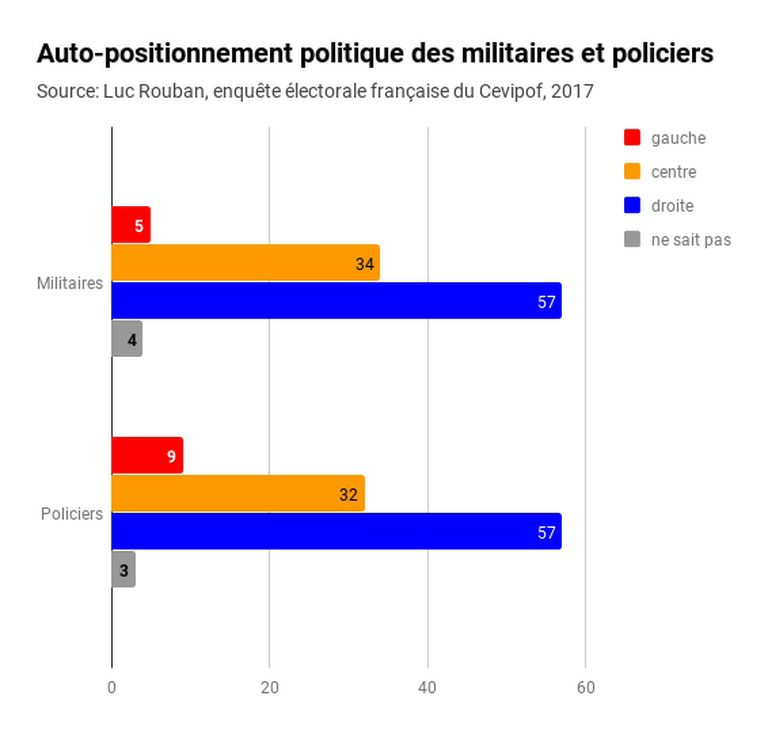 Question: Who will you vote for in the first round of the Presidential election (2017)? 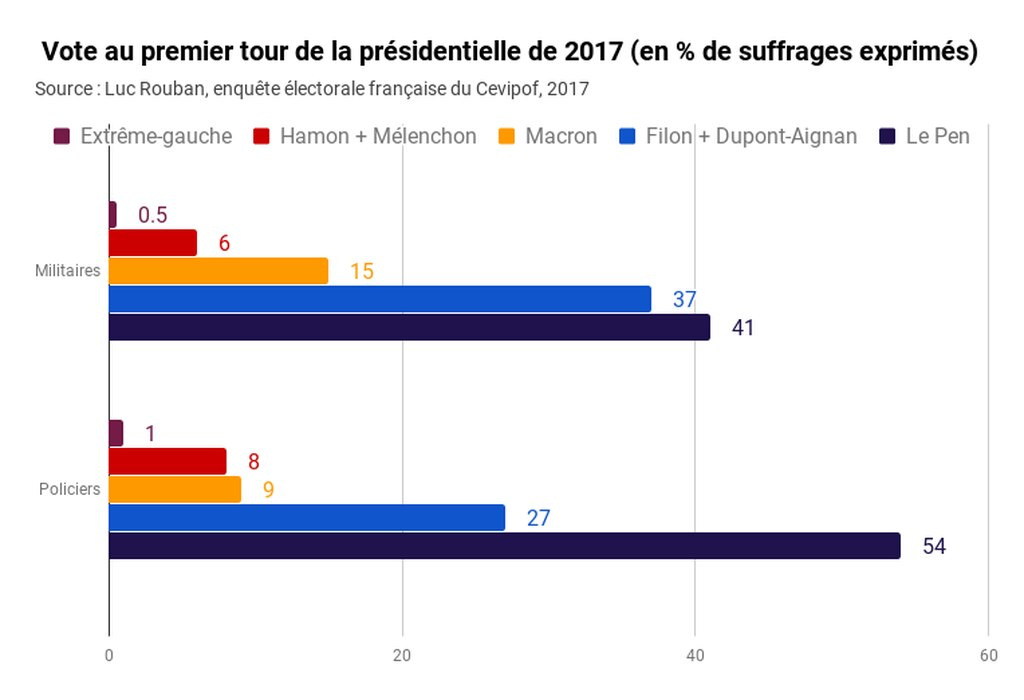 Being affiliated with weapons, having an autoritarian-leaning mindset and appreciating the current government are all conservative traits. Applicants for such services self-select to be conservative.

(Note that the self-labelling of a regime as "democratic", "socialist", "communist", or even "anarchist" does not change this analysis. You'll inevitably find that even the henchmen of truly revolutionary regimes will self-select this way, which is one of the problems with revolutions.)

Naturally, this pattern is not confined to Europe or any other region but applies there as well.

One mitigation strategy for the mitlitary is to have mandatory mitlitary service which restricts this self-selection to the officer grades. For example, Germany's problem with right-wing military factions has become more virulent since conscription ended together with the Cold War.

Not an easy question to answer, because it is hard to find unbiased reporting or studies on it.

@tim has given a good answer, I would like to add a different perspective:

When you check not the media, whose main interest is the generation of headlines, but the extremist groups whose main interest is self-defense against the police, you find that both left and right consider the police their enemy. I don't think I need to detail what the Antifa thinks about cops. But I have as well seen pamphlets circulating in right-wing circles with advise on how to act when police arrest or question you, and I could re-print them with minimal changes and give them to Antifa activists and they'd think their people wrote those.

If both the left- and right-wing outliers consider the police to be on the other side, then it follows that the police is on neither extreme. Which stands to reason given that "the police" is a rather large force with many different people in it.

Looking at the political spectrum and what the terms stand for, it's clear that "law and order" are more naturally associated with the right, so it is no surprise that studies find policemen more right leaning. That does not necessarily translate to right-wing opinions on questions such as immigration, employee laws, economic principles, healthcare, etc. etc.

Police officers (and really any individuals that serve to guard the state to some capacity such as soldiers, intelligence officers etc.) have two influences on their political leanings as a generalisation, they are more likely to be associated closely with the power structure of the state and they are more likely to take a tough on crime perspective.

Most Western governments (including Western European) generally lean conservative, and as such the power structures of these nations tend to lean conservative. When most of the commanding officers of a police force are providing orders that align with their conservative political view, then this will be reflected in the police force (fear from officers to go against accepted beliefs also comes into play here; few people want to raise their voice against the crowd).

This as well as the fact that "tough on crime" is generally a conservative approach means that the person (police officer) holding that view is more likely to be conservative. Crime is mostly conducted by disadvantaged or ill individuals, and as the only tool (generally) available to police is to punish criminals to deter them, it can be clear to see why this goes against a left-leaning approach.

As an example of this last point I have often remembered a shocking (from my perspective) story from Australia between the years of 1951 and 1975 or so. The centre-right party of the time in 1951 created ASIS (Australia's international intelligence agency) without informing anyone of its existence outside of this party's highest members. During this time ASIS spent a great deal of its resources creating smear campaigns against the centre-left party at the time and have been confirmed to have been involved with the secretive disappearances and arrests of left-leaning public individuals. The centre-left party only eventually found out about ASIS in 1975 (about four years after they came to power) and even after ASIS was publicly revealed to exist they still directed most of their resources to undermining the ruling party.

I always found this story interesting (and shocking) and a good reflection of all these factors I talk about.

Not the answer you're looking for? Browse other questions tagged europe police .

6
Are there areas of London the police are afraid to enter?
3
Explanation of John Oliver's jokes about European countries?
11
What other European countries are experiencing independence movements?
31
Who are the police in Hong Kong?
12
Have supporters of "right-wing populist" parties in Europe explained why they trust Trump?
3
What are the pros and cons of having police unions?
32
In general, do European right wing parties oppose abortion?
10
Do other countries provide police the same degree of immunity that USA police officers have?
34
What, if any, groups of pro-Russian separatists are in East-European countries?