What percentage of mass shootings in the USA are actually stopped by ordinary gun-bearing Americans?

It has been hypothesized that the harms of mass shootings in the US could be mitigated or prevented by encouraging gun ownership and reducing legal obstacles to gun carrying.

With approximately 400,000,000 (that's 400 million) guns in the hands of American citizens, and on average, more than 1 gun owned per person (including children), what percentage of mass shootings in the USA have actually been stopped by ordinary citizens?

The USA uses various definitions of mass shootings, but for this question, we can use the common definition of mass murder (4 or more people killed) or the broader Stanford Mass Shootings of America (MSA) definition (3 or more people injured).

I'm interested in data from any time period during the last century spanning at least 1 year.

From the details in the The Violence Project database. The following can be seen.

Statistics based on the available sample say that the ordinary gun-bearing citizen's presence in the location has an insignificant effect on the outcome. The same has been highlighted by many.

This data is based on incidents which resulted in 4+ deaths. The statistics of incidents which did not result in death might show a completely different result. I could not find any such data so far. However, from the available data the effectiveness of an armed civilian in preventing mass shooting can be inferred to be insignificant.

Update FBI Article Active Shooter Events from 2000 to 2012 provides the details of "active shooter" Incidents which by definition is slightly different from what is considered above. The summary on how these incidents ended is worth considering for the analysis. 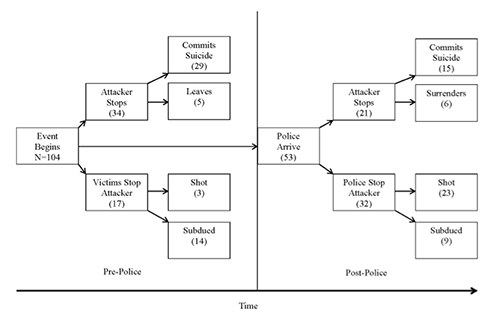 The point to highlight is that in 3 cases the shooter was shot dead by the Armed Citizen and in 14 cases he was overpowered. The data provides scope for interpretation. The sample size is fortunately low and we wish that it stays low. The overall answer is that the hard statistics available in the public domain are inconclusive. However based on available data it can be said 3 to 4 percent of incidents have been concluded by armed ordinary American.

Unfortunately, statistics based on actual events are not able to answer this question.

Creating meaningful statistics based on past events to support or reject this hypothesis is infeasible, because any such comparison (e.g. shootings in Dallas-Fort-Worth vs shootings in New York) will be subject to a massive number of factors that the study can't control, as well as a low sample size, which makes such a study useless, except for scoring political points.

There are several factors that make this a very difficult question to answer definitively.

Here is just one example of how jockeying over definitions can affect reporting and public perception. Depending how these questions are answered, which reasonable people might disagree on, an intervention by an armed citizen to detain or kill a would-be mass shooter, that prevents or minimizes other casualties, might not be counted in statistics as a mass shooting at all.

In which of these hypothetical scenarios would an armed citizen have "stopped a mass shooting"?

Many advocates of citizen carry believe that encouraging citizen carry is an effective deterrent to those who might be otherwise inclined to attack the vulnerable. It is difficult to directly measure and prove this effect; it seemingly can be measured only by comparing broad crime statistics between jurisdictions with similar demographics but different citizen carry policies.

To the extent this effect is real, it is without doubt to be preferred as a means of stopping mass shootings over direct intervention by returning fire after a perpetrator opens fire. But arguments over definitions and the difficulty of knowing how many times potential shootings were prevented by citizen carry, or simply by allowing citizen carry, make it difficult to have an objective debate in the public square.

Ultimately, it comes down to politics, how you believe our society should be. Do you trust your fellow citizens to carry firearms, or not? Do you trust your government and police to protect you from the bad guys, or not? Is individual liberty so important as to make these other questions irrelevant, or not?

There are two major problems with attempting to answer this question:

Even when factoring and filtering the databases to unify onto a single strictest definition of "mass shooter" incidents results in discrepancies:

Data compiled into these libraries also come from various sources, including but not limited to: media stories, research data sets, the scientific literature, books, advocacy groups, press data sets, police records, FBI records, CIA records, court documents, the BJS, and accounts detailed by the offenders. There is no centralized, dependable, consonant record of every incident that led to 3+ or 4+ deaths that occurred in any year nationwide, let alone an authoritative entity that has record of every attempted mass shooting that could have potentially caused 3+ deaths. 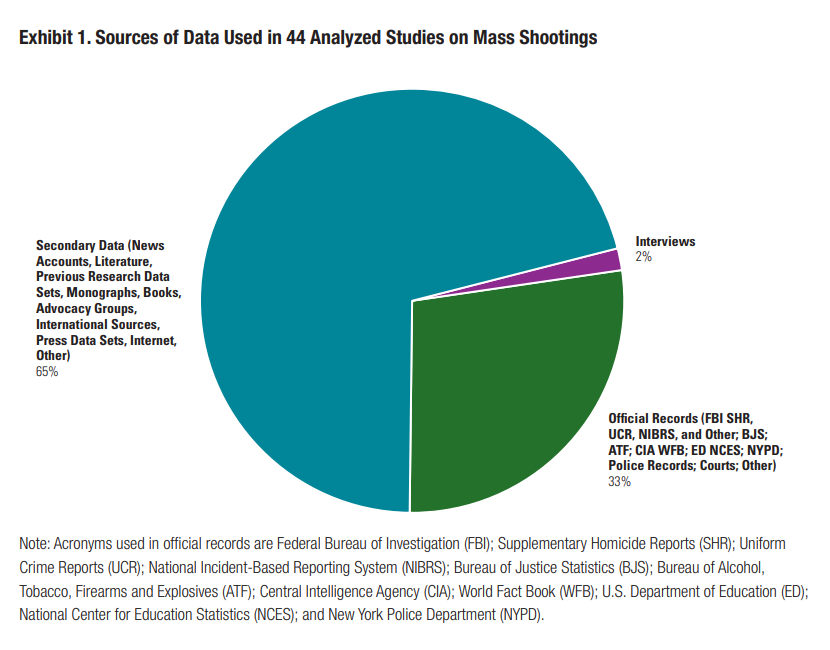 My point is that any dataset that you view is likely to be flawed or incomplete, although the post above with the FBI's sequence diagrams is likely the closest you'll get to an answer.

Not the answer you're looking for? Browse other questions tagged united-states crime guns second-amendment .

17
What are the practical downsides of background checks for gun purchases?
4
What are the statistics for mass shootings by skin color?
8
What are the political obstacles for gun control legislation in the United States?
2
Are there any government policies that meaningfully influence mass shootings per capita?
78
When was the Second Amendment last used to fight against the US government to protect people's freedom?
9
How many Americans are actually uninsured?
13
How do "originalist" interpreters of the constitution cope with the 2nd amendment?
8
What arguments do proponents of the second amendment use to conclude that gun ownership helps protect the people against the government?