From the answer to one of my previous questions:

It's an old saw in political science that if one wants a just society one has to surrender to having an inefficient society. Autocrats and dictators are efficient, but that's not always a compliment; Hitler made the trains run on time, but then he used those trains to commit world war and genocide. Representative democracy is slow, contentious, and aggravating — a constant "two steps forward and one step back" affair — but in the long run it grinds its way through to reasonable, moral outcomes. Ten people might be an efficient-sized group to rule a nation, but it is pragmatically and statistically impossible to select a group of ten people who are representative of the nation's population as a whole, so their decisions will not reflect the interests of their populace.

For COVID-19, it's presumably better to be efficient than it is to grind one's way to reasonable, moral outcomes. Therefore: is it the case that autocratic countries (as measured by, e.g., the Democracy index) handle COVID-19 better?

No, I think this is more about a country's ability and willingness to control borders and impose quarantine restrictions.

Border control working to keep the virus under control

The trick to keeping the virus under control in at least China, Australia, Taiwan, New Zealand and Thailand is to get local transmission under control (if there was any) and then to make sure that no new cases come in and spread locally.

Thailand and China are countries with land borders, but they are still able to keep a hold of imported cases though extensive quarantine of foreign arrivals. This is confirmed by analyses from from foreign governments (e.g. the European Council) which classify these as low risk countries.

The same principle applies to Taiwan, New Zealand and Australia, but they have an easier job keeping control of imported cases because they are islands. That means most arrivals enter through a few ports of entry (airports, regular ports) where arrivals are also subject to quarantine and testing.

When it doesn't work

Of course being an island alone doesn't mean it's a safe haven automatically. The UK has had many coronavirus cases with significant local transmission. Once local transmission cannot be controlled, stringent entry controls won't prevent the virus from spreading.

And when you don't even have the benefit of few ports of entry, as many continental EU countries don't, then it's even harder to keep the virus under control. This essentially happened in the European Union with the first epicenter in Italy. Due to freedom of movement, many of those cases have spread to other European countries which failed to implement efficient quarantine for all travelers.

Going back in time, the Dutch state broadcaster NOS wrote on the 3rd of March 2020:

The number of confirmed cases of the coronavirus in the Netherlands rose to 23 yesterday, the RIVM [Dutch health authority] reported. That's five more than yesterday. Almost all confirmed cases are travelers from Northern Italy or family members of previously confirmed patients.

Due to the outbreak of the virus, the Dutch Ministry of Foreign Affairs has immediately changed the travel advice for Northern Italy. Dutch nationals should only go there if travel is necessary, which does not include vacationing. Up to now, the largest part of Northern Italy was coded yellow [advice: beware of risks]. This will now change to code orange [advice: necessary trips only].

Back to Thailand, how did they manage it?

Comparing that with Thailand which has kept most local transmission under control until now (March 2021), there was already talk of quarantine for high-risk travelers as early as the 5th of March 2020:

On Tuesday, Thailand’s Public Health Minister Anutin Charnvirakul said in Facebook post that all visitors from “high-risk zones” would be required to quarantine themselves for 14 days, according to a Bangkok Post report. The post, which was quickly deleted “without explanation,” reportedly mentioned Singapore, Japan, China and South Korea.

Restrictions are set to get even tighter. On April 9, the government announced a lockdown for all 17 sub-districts of the island for 14 days, asking all residents to stay home from April 13-26, "or until the situation improves."

"The move makes Phuket the first province in Thailand to impose a total lockdown of all areas, in its sustained effort to stop the spread of the Coronavirus Disease 2019 (Covid-19)," says a statement from the Tourism Authority of Thailand.

But entry from abroad was restricted from March 26th through an emergency decree requiring the quarantine measures that are still in effect today.

Back to the question

Is this necessarily an autocratic vs democratic situation? No, clearly democratic countries can take emergency measures too. And as we've seen (I've not shown a timeline from Australia or New Zealand because I'm not as familiar with their handeling specifically) some democracies have taken swift emergency measures whereas others (e.g. in the European Union) have reacted too slowly for such measures to work.

And while I've not given specific examples, failure to take measures quickly has also occurred in some autocratic countries.

[see below for updated image]

If one believes the data then the authoritarian countries clearly did better than the democratic ones, although some of the reported numbers are so low that I have trouble believing them. For example, Yemen has only 126 cases per capita, but the country's humanitarian situation was already dire before the pandemic, so this number is surprising.

Edit: I filled in some of the gap in the middle. Since some of the numbers appear unreliable, I filled in from the "democratic" end. The current plot goes down to Nigeria, with democratic index 4.1. 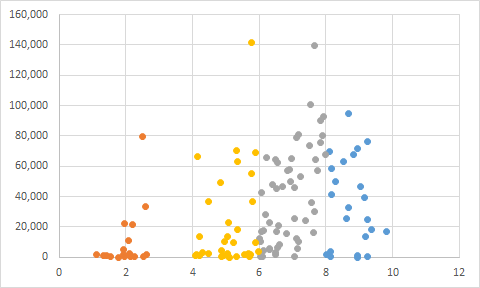 It appears there is a correlation between democracy & cases per capita, but it's small.

If I learned anything from this, it's that many African countries seem to have done amazingly well at handling COVID-19, if one only looks at cases per capita. For example, Tanzania has 8 cases per capita, Uganda has 871, Nigeria has 773.

Not the answer you're looking for? Browse other questions tagged democracy covid-19-virus autocracy .

35
Why do most countries have so many members of parliament?

5
How to explain that Japan and South Korea are democratic but very collectivistic countries?
28
Why are non-Schengen countries excluded from the Covid-19 US travel ban?
4
Are de facto Schengen countries exempt from the Covid-19 US travel ban?
50
Why do Western countries seem to be less efficient than Asian countries in fighting against COVID-19?
24
How has the handling of the coronavirus outbreak (CoViD-19) affected Donald Trump's approval ratings?
31
Is there an explanation for why ~20% of Americans think the US's response to COVID-19 has been better than South Korea's?
5
How has the Scottish Government's handling of the COVID-19 pandemic differed from that of the UK Government?
12
Are Democrat-led states handling COVID-19 better than Republican-led states?