What political factors led to the slow rollout of the COVID-19 vaccine in Canada?

Among the G7, Canada ranks second to last in terms of COVID-19 Vaccine rollout, only ahead of Japan (where Vaccine rollout only began in March). Additionally, Canada was the only G7 member to tap into a supply of vaccines intended for developing countries.

See below a graph of the share of the population in each G7 member fully vaccinated.

What were the political factors that resulted in this outcome? 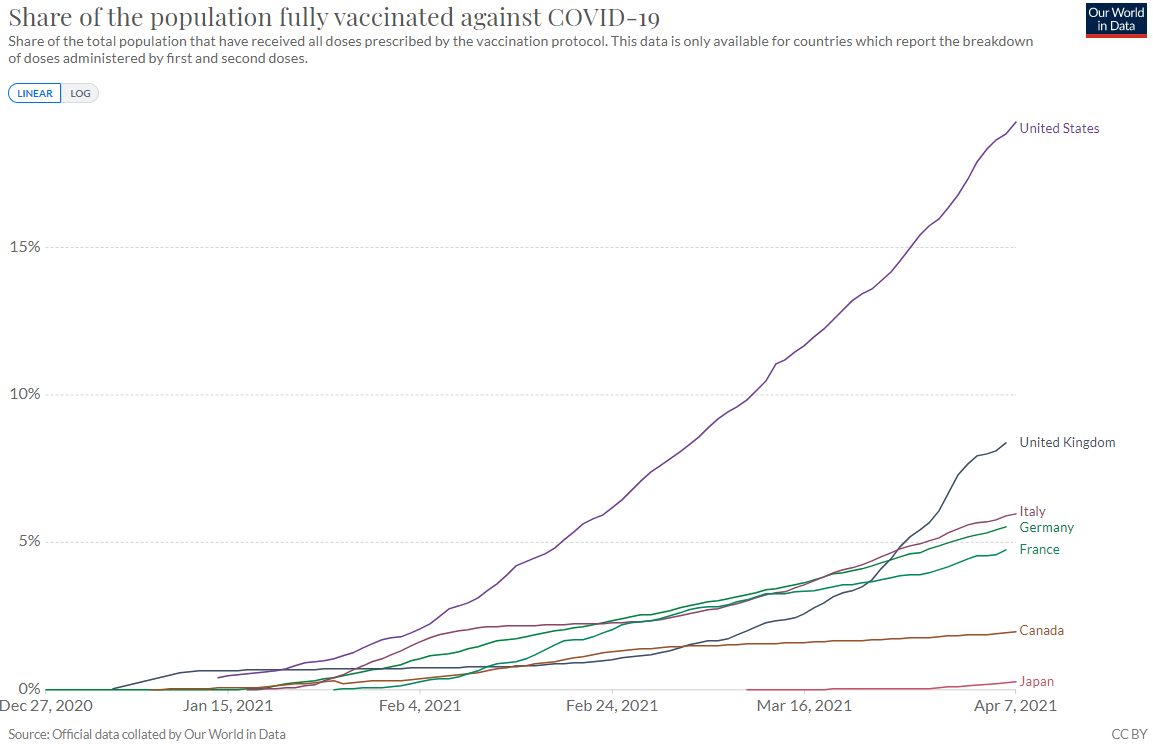 To some degree, this is the natural result of living in a small country during an unprecedented global health crisis that has scrambled supply chains all over the world. Without much domestic manufacturing capacity to speak of, Canada had to sign advance-purchase deals with international vaccine companies. The country hedged its bet by mostly going with companies funded by Operation Warp Speed, and so far its strategy has been to overbuy doses in the hopes of securing enough to vaccinate all of its citizens. A mounting critique, however, is that perhaps Canada should have been more specific than “first quarter of 2021” in terms of arranging vaccine-delivery timing. [André] Picard [a health expert in Canada and a longtime columnist for The Globe and Mail] said that Canada, by not giving manufacturers a specific week, or even day, allowed them to push delivery until the outer limit of the quarter.

To Robert Van Exan, a lifer in the Canadian pharmaceutical industry, the reasons for the country’s vaccine shortages are as plain as day.

“Canada has watched its pharmaceutical industry slowly move out of here over decades, because they created an environment that was not conducive to investment in this country,” charges Van Exan, a semiretired vaccine-industry consultant who spent nearly 35 years at Sanofi Pasteur working on policy, immunization campaigns, sales, and product development.

Van Exan then blames the lower period of patent protection in Canada together with the largely single-buyer (=government) market for vaccines.

Frankly I find these analyses a bit shallow given what Israel was able to pull off in comparison... although pricing was probably an if not the major issue. Israel paid about double per Pfizer dose compared to what the EU pledged for instance; €23 ($28) per dose compared to €12.

The same Van Exan suggests Canada generally under-allocated funds for vaccines. I couldn't find all the details on what Canada was willing to pay for Covid vaccines (apparently the Canadian government decided not to release this info), but some initial reports suggest that Canada was actually paying more than either of US, EU or possibly even Israel per dose...

Health Canada told CTV News that Canada received 695,275 doses from both Moderna and Pfizer in January. On a per-dose basis that would mean the Canadian government would have paid roughly $34.51 per dose. [...]

(N.B. this last source priced everything in Canadian dollars, apparently.)

Although that's not really indicative of how much Canada pledged for the rest of the doses.

Not the answer you're looking for? Browse other questions tagged covid-19 canada public-health .

39
What political and social factors underlie Sweden's controversial response to COVID-19?
0
Have any governments proposed relaxing drug/vaccine development requirements for the duration of the COVID-19 pandemic?
1
What led the UK Government to switch to a decentralised COVID-19 contact-tracing app?
2
What are the financial arrangements for COVID-19 vaccine purchases given there is no proven vaccine anywhere yet?
2
What caused Canada to change their stance on the "lab leak" theory of COVID?
29
Why is there so much reluctance to make the COVID vaccine mandatory for adults?
19
Why is North Korea refusing COVID vaccine donations?