Are Venezuela's dismal finances the result of Maduro's mismanagement, the US sanction, or both? [duplicate]

Ask Question
Asked 5 months ago
Active 4 months ago
Viewed 246 times
3
This question already has answers here:
Why has Venezuela's economy collapsed when Cuba's has not? (4 answers)
Closed 5 months ago.

Is the dismal financial situation of Venezuela because of Maduro's mismanagement or the US sanction or both?

Chavez and Maduro's incompetence because the sanctions were only put in place after things got bad (one could argue that before fracking-led energy independence the US was more willing to turn a blind eye on bad behaviors within an oil producing country).

due to the country's high levels of urban violence, inflation, and chronic shortages of basic goods[11][12] attributed to economic policies such as strict price controls.

During the crisis in Venezuela, governments of the United States, the European Union, Canada, Mexico, Panama and Switzerland applied individual sanctions against people associated with the administration of Nicolás Maduro. The sanctions were in response to repression during the 2014 Venezuelan protests and the 2017 Venezuelan protests, and activities during the 2017 Venezuelan Constituent Assembly election and the 2018 Venezuelan presidential election. Sanctions were placed on current and former government officials, including members of the Supreme Tribunal of Justice (TSJ) and the 2017 Constituent National Assembly (ANC), members of the military and security forces, and private individuals accused of being involved in human rights abuses, corruption, degradation in the rule of law and repression of democracy.

Certainly, US sanctions have worsened the crisis. But they did not cause it and Venezuela showed signs of problem way before then were imposed.

From History of the Venezuelan oil industry

Chávez began setting goals of reinstating quotas, such as ten percent of PDVSA's annual investment budget was to be spent on social programs.[39] He also changed tax policies and the oil revenue collection process.[13] Chavez initiated many of these major changes to exert more control over PDVSA and efficiently deal with the problems he and his supporters had over PDVSA's small revenue contributions to the government. By 2002, warnings grew of the Chávez overspending on social programs in order to maintain populist support.[dubious – discuss][40]

In December 2002, PDVSA officially went on strike creating a near-complete halt on oil production in Venezuela. The aim of the Venezuelan general strike of 2002-2003 was to pressure Chávez into resigning and calling early elections. The strike lasted approximately two and a half months, and the government ended up firing 12,000 PDVSA employees and replacing them with workers loyal to the Chávez government, many of whom came out of retirement to replace the fired.[41] By January 2002, protests involving hundreds of thousands of Venezuelans opposing Chávez became common in Venezuela.[dubious – discuss][37] In April 2002, mass demonstrations occurred in Caracas and Chávez was temporarily overthrown by the military, backed by U.S. interests, during the 2002 Venezuelan coup d'état attempt. 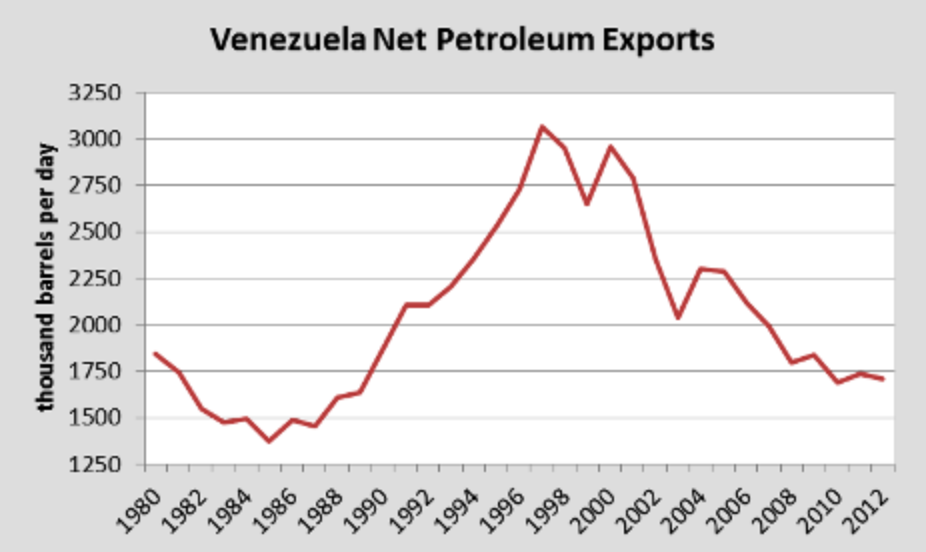 Not the answer you're looking for? Browse other questions tagged united-states economy sanctions venezuela .

53
Why has Venezuela's economy collapsed when Cuba's has not?

4
Can the UK afford to extend sanctions to financial ones as a response to latest ex-spy's murder?
53
Why has Venezuela's economy collapsed when Cuba's has not?
7
What would be the repercussions if Venezuela defaulted on Russia's loan?
72
What does the US have to gain by other countries not being socialist or communist?
1
Why does Mexico support Maduro?
3
Why did the US dispossess an Iranian ship carrying natural gas to Venezuela?
4
How effective has the sanction on selling of arms to China been?
2
What happens if a company/individual conducts business with a sanctioned (embargoed) country when the sanction is not from their country?