Must Scottish voters cast both constituency and regional votes for their vote to be valid?

Scottish voters are heading to the polls on the 6th of May to elect 129 MSPs to a new term in the Scottish parliament at Holyrood. Each voter gets to cast two votes.

Must both ballots be filled out for their vote to be considered valid? Or are they allowed to cast only 1 ballot (either contituency or list) if they wish.

No, because it would be impossible to enforce.

The two votes are on two separate ballots on two separate pieces of paper. It is therefore impossible to tell, given a constituency ballot, whether the person cast a valid regional ballot (or vice versa).

No - as Joe C points out, the regional and constituency ballots are now on separate pieces of paper making it impossible to pair up the ballots at the count. Indeed, the Electoral Commission's "easy guide" to the count states that the ballots are separated by contest before counting:

Ballot boxes are opened and emptied onto tables. The empty boxes are shown to everyone present.

However, this was not always the case. In the 2007 Scottish Parliament elections, the ballots were combined onto one piece of paper, as below. The wording of this ballot paper caused significant confusion among voters, as many took the wording 'You have two votes' to mean that they could use both of their votes on one ballot, leading some constituencies to have over 10% of votes rejected. In some cases, the number of rejected votes exceeded the successful candidate's majority.

In the aftermath of this election, the Electoral Commission produced a review of the election to examine how this could be improved upon next election. Table 1.2 of Appendix D of the report shows a cross-table classifying ballots based on whether their regional or constituency votes were valid or not. It shows that 81,357 ballots had only their constituency vote counted, and 56,934 had only their regional vote counted - so even with the combined ballot paper, the votes were treated separately and voters were not required to vote in both the regional and constituency vote. 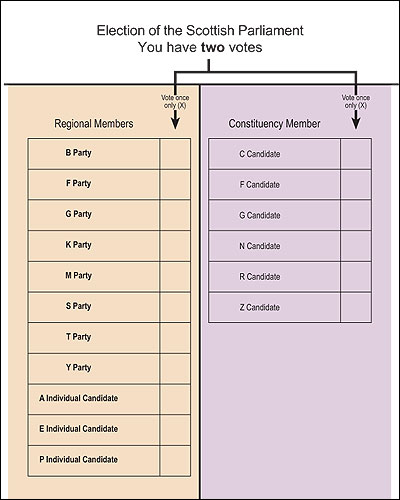 Not the answer you're looking for? Browse other questions tagged election parliament voting-systems scotland .

11
Consequences of hypothetical "cast one vote for OR against" system?
1
What's a good way to estimate the number of constituency seats that will be won in Scotland on a given vote percentage?
11
Why hasn't Estonia discontinued e-voting?
42
What is it called when someone votes for an option that's not their first choice?
4
Is organizing "piggybacked" referendums something unusual in EU?
4
Could a simple-majority bill for a general election, passing through both houses be amended by the SNP to provide for a further Scottish referendum?
5
How does Alba's "list only" strategy work in Scottish Elections?
11
Voting system with two votes as a defense against fear of voting for a loser - is it anywhere in the world?