Is there a correlation between a county's swing towards Democrats from 2004-2020 and increase in minority population?

In 2020's presidential election, it was shown that Joe Biden lost support from nonwhite voters, most of whom were ideologically conservative.

However, he not only still won this voting group, but he did better here than Kerry. Since 16 years is a fairly long time for demographic changes, I am wondering if there was a correlation between these two variables at the county level: the increase in minority population from 2000 to 2019 (the most recent data available now, and 2000 is a census year) and the change in two-party Democratic vote share, from 2004 to 2020 on the presidential level.

Notes: I am asking this question because I want statistical analysis for a project I am working on, and want to see how demographic change affected real-life election results, and not just projections. As an example, the coordinate for the national average is (10, 3.5) -- which means a 10 percentage point increase in nonwhite population in the US as a whole, and a 3.5 percentage point increase in Democratic vote share from 2000 to 2019.

No, there is little to no correlation. We can use decennial census data from 2000, demographic estimates from the American Community Survey, the MEDSL county data for the 2004 election, as well as Fox's feed for the 2020 election to investigate this. There is barely any correlation between the variables - a correlation coefficient of around 0.11, which indicates a very weak positive correlation.

As you can see from the graph below, most counties have seen a small increase in non-white population, but the change in two-party vote share varies significantly. 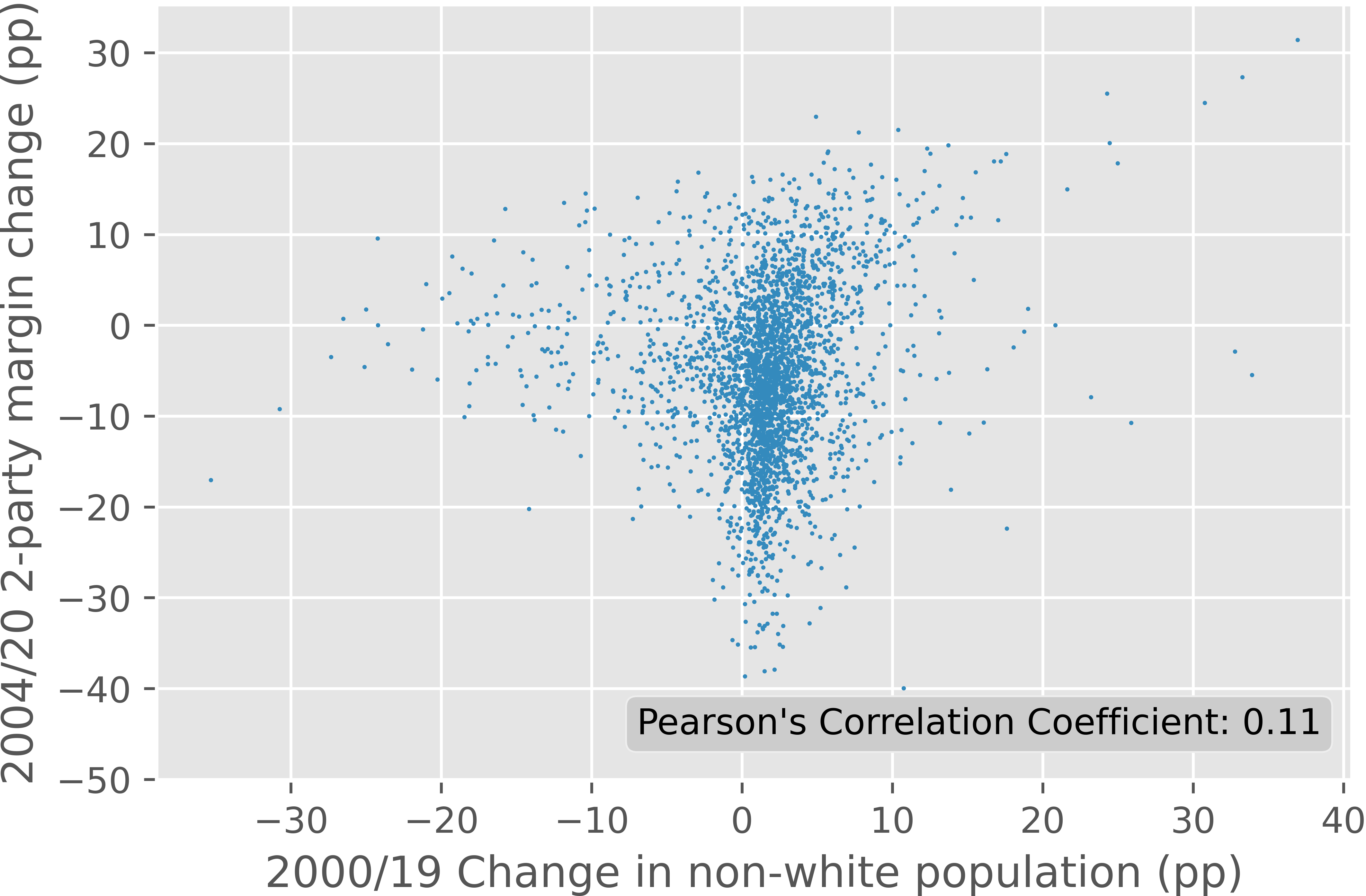 3
What was the correlation between a US state's Hispanic population and two party vote share for Hillary Clinton?
1
Is California more liberal than Vermont?
16
Why is there such a large difference between the US population and electorate?
3
Correlation between 538's urbanization index and vote margin 2020?
7
Correlation between county-level college education level and swing towards Democrats from 2016-2020?
32
Is there objective proof that recent bills (1st half of 2021) that restrict voting are targeting Democratic voters specifically?
3
Why was 2020 a depolarization election?
3
What is the correlation between swing and change in votes cast from the 2016 to 2020 US presidential elections among major parties?