I was reading an article in the New York Times on voter turnout titled Huge Turnout Is Expected In 2020. So, which party would benefit? I found something peculiar about how age affects voter turnout. I grabbed a screenshot of it on my phone. 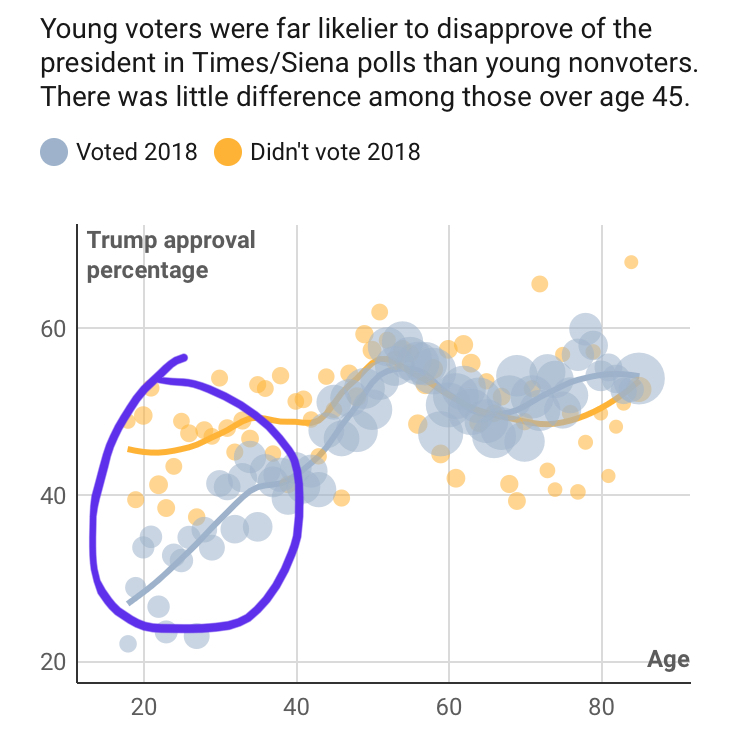 It shows that Trump's approval was significantly lower among those who voted under 45, tied for those from 45 to 70 or so, and somewhat higher among those over 70. (I consider this reliable given how reliably partisan Trump approval is for predicting the presidential vote choice.)

I say "benefits Republicans" because of Trump's approval being higher among young nonvoters (or at least 2018 nonvoters) than voters, and young people are underrepresented especially in midterms.

Note: the article that this page is derived from is here. I am asking this because I am writing an article on the subject.

I do not think that this single image alone supports the title assertion "higher turnout benefits Republicans."

Trump stands out as a "Republican," because of his cult of personality, and the fact that he somehow cast himself as anti-establishment. So it's somewhat plausible to think he polled better among non-voters than voters. Remember that 2018 was a midterm election, and so left-wing voters were highly motivated to flip the House and/or Senate to put brakes on him.

148
Why is President Trump making such a big deal about fake news, and specifically targeting reputable organizations like The New York Times and CNN?
75
Why don't poor people vote in the United States?
31
A new proposal suggests subdividing Washington D.C. into 127 new states so that they can change the Constitution at will. Is this possible?
16
What fact-based arguments exist that mail-in voting would lead to significantly higher instances of US voter fraud?
3
What exactly is the “Trout” in this D.C. Circuit Court of Appeals opinion? Does it suggest a political motive of a judge?
2
Does it make a difference that senate republicans choose not to vote?
2
Why does there seem to be some sort of drop-off with young voters support of Republicans that accompanies lower turnout elections?