Why are many college towns so Democratic? 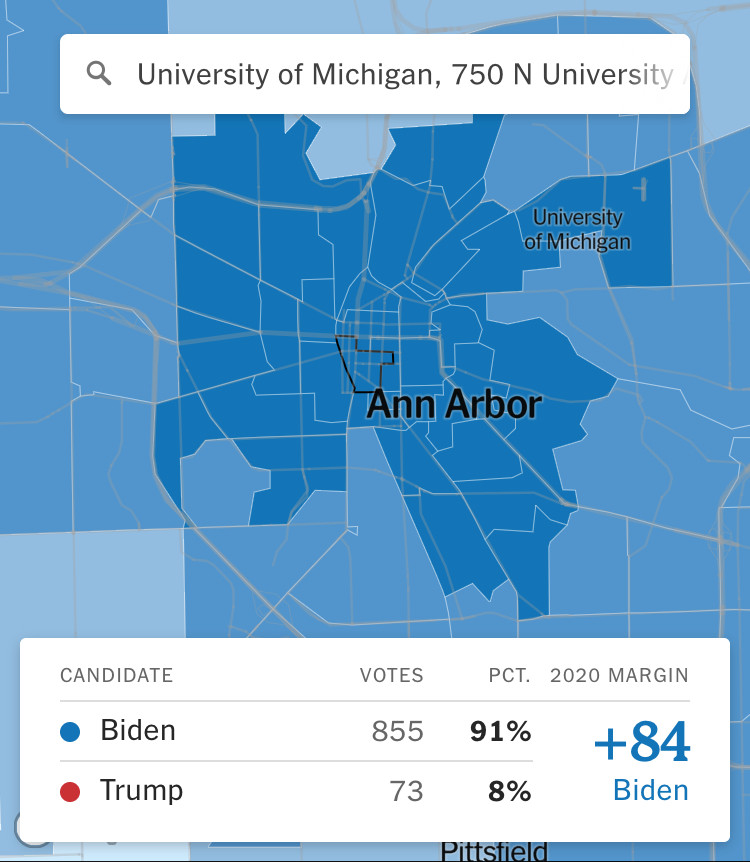 These college towns are recording performances for Democrats that are literally Washington DC level. Ithaca in Upstate New York had an even bigger performance for Democrats.

This is interesting. Why are college towns so Democratic-leaning, far more than average people of college age?

While an average small town will only see diverse viewpoints/people that are already endemic to the city, a college town sees new students from all over the world every single year. Likewise, large cities also see more diverse viewpoints and people, and also tend to vote for Democrats.

But it isn't just that: educated people...

are more likely to understand the complex and interdependent nature of a modern economy, and the way that prosperity is dependent on factors like an educated work force, good transit systems, and new scientific breakthroughs.

So the reason why Biden did so particularly well in university districts could be that college students are the intersection of those two demographics.

Another reason could be (but that's just my conjecture) that Biden made a couple election promises which would be of great benefit to college students in particular if they were implemented:

Edit: More explicit explanation of why this answer is constructed the way it is.

There are actually multiple questions hidden in what you're asking:

Most existing answers concentrate on #2, but answering #2 without addressing #1 is going to result in a potentially very misleading picture of things. Those are distinct, albeit heavily interrelated questions, and both have the same underlying cause: Because the US voting system doesn't allow a third party ever to rise to power.

Since it doesn't allow any meaningful political spectrum to arise, people have to choose the lesser of two evils. While Democrats are commonly seen as being liberal or "the left" (which are the policies much more likely to be favoured by younger people, people from urban areas, people with higher education, and people with more exposure to different people and cultures) in the US, they're actually shockingly far to the right and conservative by almost anyone else's standards, and their platform often boils down quite literally to "at least we're not Republicans". If the US didn't use the very broken first-past-the-post voting system, you wouldn't see a sea of blue, and instead you'd see a rainbow of options, mostly skewing to the left of the national popular vote.

So what you're seeing is an artefact of the fact that:

Whilst it might seem very odd and unusual to see ~90% of votes for one candidate in a particular place, it's really no more unusual than the fact US elections almost always end up with close to perfect 50% split, which is probably what you're used to and consider normal, and is just another facet of the same system that causes both.

If you're interested in exploring the topic of first-past-the-post and its problems, other voting systems, and how voting systems really shape almost everything about the political system, CGP Grey has an excellent series of videos on that.

Political leanings are influenced by life experiences. College towns have a relatively broad exposure to different cultures and political ideas due to the rotating student base provided by the university. This broader exposure has a distinct depolarizing effect on individuals, where their evident political leanings move closer to what their true political leanings would be, if we lived in a world with perfect information.

The myth that colleges in the USA push students to the left is mostly false. The appearance of indoctrination is there due to the local Overton window in the US being somewhat right-leaning when compared with the rest of the world. Having a broad exposure to international cultures will tend to shift an individuals Overton window toward the middle, which is a shift to the left in the US. As a result, a more liberal ideology is the usual result in US universities, and residents of US college towns are more likely to experience a shift in their Overton windows to the left.

The other major political effect caused by having a broader exposure to different cultures would be a heightened awareness of social issues, and how those issues impact individuals from different backgrounds. While this in itself doesn't shift true political leanings, it can shift the perception of political leaning by providing more information to an individual. A great example would be a strong 2A proponent advocating for stricter training and gun safety requirements after befriending an international student from a war-torn area of the world. It doesn't mean that 2A is now a bad thing in their mind, it just means that they understand that a small amount of regulation can preserve individual freedoms that might otherwise be at risk.

Let's see some graphs that illustrate political affiliation by profession: 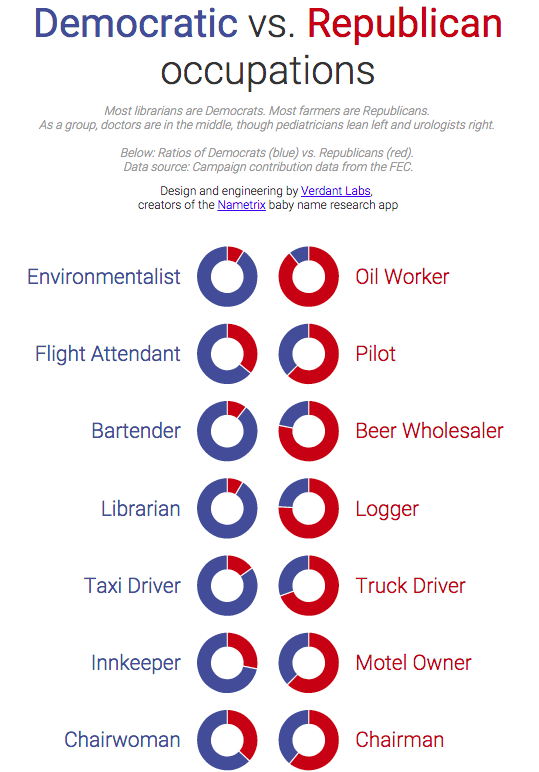 Comparison of donors, farmers (rural) are the most traditional.

Young people, college people, and urban zones are especially likely to be concerned with global warming, social justice, urban poverty, and to be more scientific and less religious, than older, rural and les academic people.

Partial answer: academics are more likely to be liberal than conservative (especially in the social sciences), and hence one would expect college towns to lean Democratic. See this question on Academia.SE.

If you're looking for a deeper answer, I don't have one, and judging by the responses to that question there is no readily-available answer.

Not the answer you're looking for? Browse other questions tagged united-states voting education .

5
How can Obama's free community college plan budget only $60B for 10 years?
14
Why are there so many voting systems used in UK elections?
48
Why does having a college degree make a difference to how white Americans vote?
18
Are Democratic members of congress more educated?
0
On the AP/Google election tracker, are 'Electoral Votes' describing Electoral College votes?
26
How would one justify public funding for non-STEM (or unprofitable) college majors to a non college educated taxpayer?
3
Why was 2020 a depolarization election?
5
Why are many US school boards elected?