Also, as a bonus, what is the appropriate ISO 3166-2 code for each (if they are different) or all of these places?

Firstly Yukhari (or Yuxarı, in this answer I'm going to use the conventional English spelling of Azeri words) is just the Azeri word for "Upper". So there is no difference between "Yukhari-Karabakh" and "Upper-Karabakh" 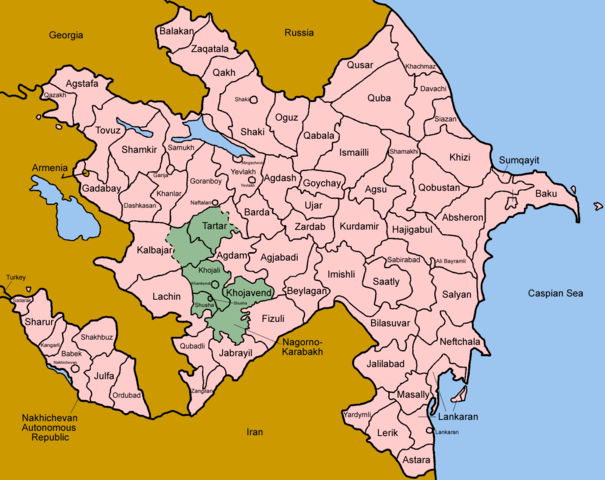 Nagorno-Karabakh is the ethnically mostly Armenian region in Green It was a former Oblast in the Soviet Union. It is not currently a defined administrative region of Azerbaijan.

Upper Karabakh is one of the 11 economic regions of Azerbaijan. It is composed of the districts of

That is the area of Nagorno-Karabakh plus the predominantly Azeri districts of Agdam, Jabrayil and Fizuli.

ISO codes haven't been assigned at the "economic region" level, but at the district level, so Tartar is AZ-TAR, and others can be found from wikipedia

There are three geopolitical entities here:

Not the answer you're looking for? Browse other questions tagged azerbaijan .

7
What has Azerbaijan said it is going to do with the Armenians in Nagorno-Karabakh?
0
What did Georgia do during the Azerbaijan-Armenian War?